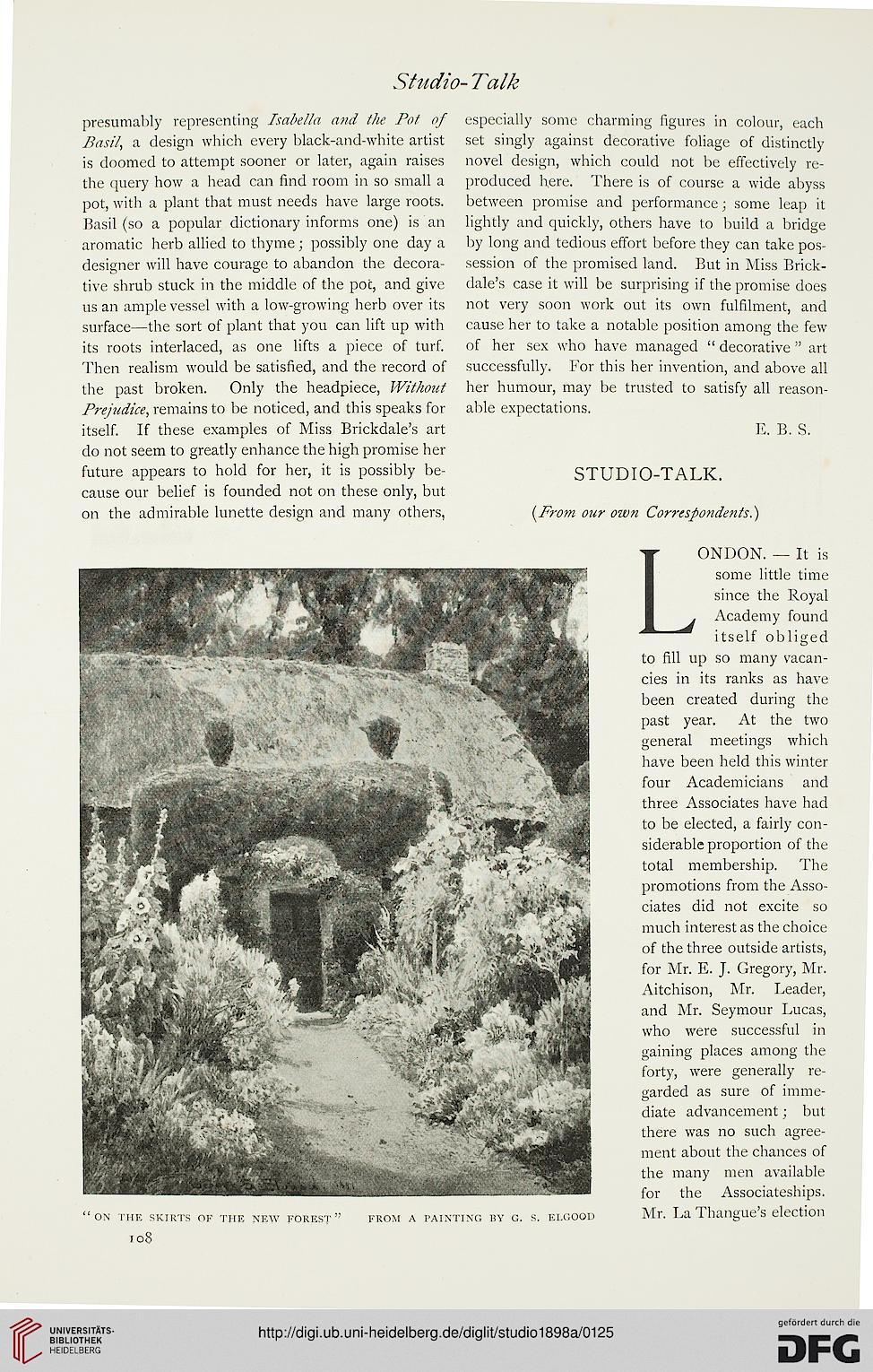 presumably representing Isabella and the Pot of
Basil, a design which every black-and-white artist
is doomed to attempt sooner or later, again raises
the query how a head can find room in so small a
pot, with a plant that must needs have large roots.
Basil (so a popular dictionary informs one) is an
aromatic herb allied to thyme; possibly one day a
designer will have courage to abandon the decora-
tive shrub stuck in the middle of the pot, and give
us an ample vessel with a low-growing herb over its
surface—the sort of plant that you can lift up with
its roots interlaced, as one lifts a piece of turf.
Then realism would be satisfied, and the record of
the past broken. Only the headpiece, Without
Prejudice, remains to be noticed, and this speaks for
itself. If these examples of Miss Brickdale's art
do not seem to greatly enhance the high promise her
future appears to hold for her, it is possibly be-
cause our belief is founded not on these only, but
on the admirable lunette design and many others,

especially some charming figures in colour, each
set singly against decorative foliage of distinctly
novel design, which could not be effectively re-
produced here. There is of course a wide abyss
between promise and performance; some leap it
lightly and quickly, others have to build a bridge
by long and tedious effort before they can take pos-
session of the promised land. But in Miss Brick-
dale's case it will be surprising if the promise does
not very soon work out its own fulfilment, and
cause her to take a notable position among the few
of her sex who have managed " decorative " art
successfully. For this her invention, and above all
her humour, may be trusted to satisfy all reason-
able expectations.

{From our own Correspondents.}

LONDON. — It is
some little time
since the Royal
Academy found
itself obliged
to fill up so many vacan-
cies in its ranks as have
been created during the
past year. At the two
general meetings which
have been held this winter
four Academicians and
three Associates have had
to be elected, a fairly con-
siderable proportion of the
total membership. The
promotions from the Asso-
ciates did not excite so
much interest as the choice
of the three outside artists,
for Mr. E. J. Gregory, Mr.
Aitchison, Mr. Leader,
and Mr. Seymour Lucas,
who were successful in
gaining places among the
forty, were generally re-
garded as sure of imme-
diate advancement; but
there was no such agree-
ment about the chances of
the many men available
for the Associateships.
Mr. La Thangue's election