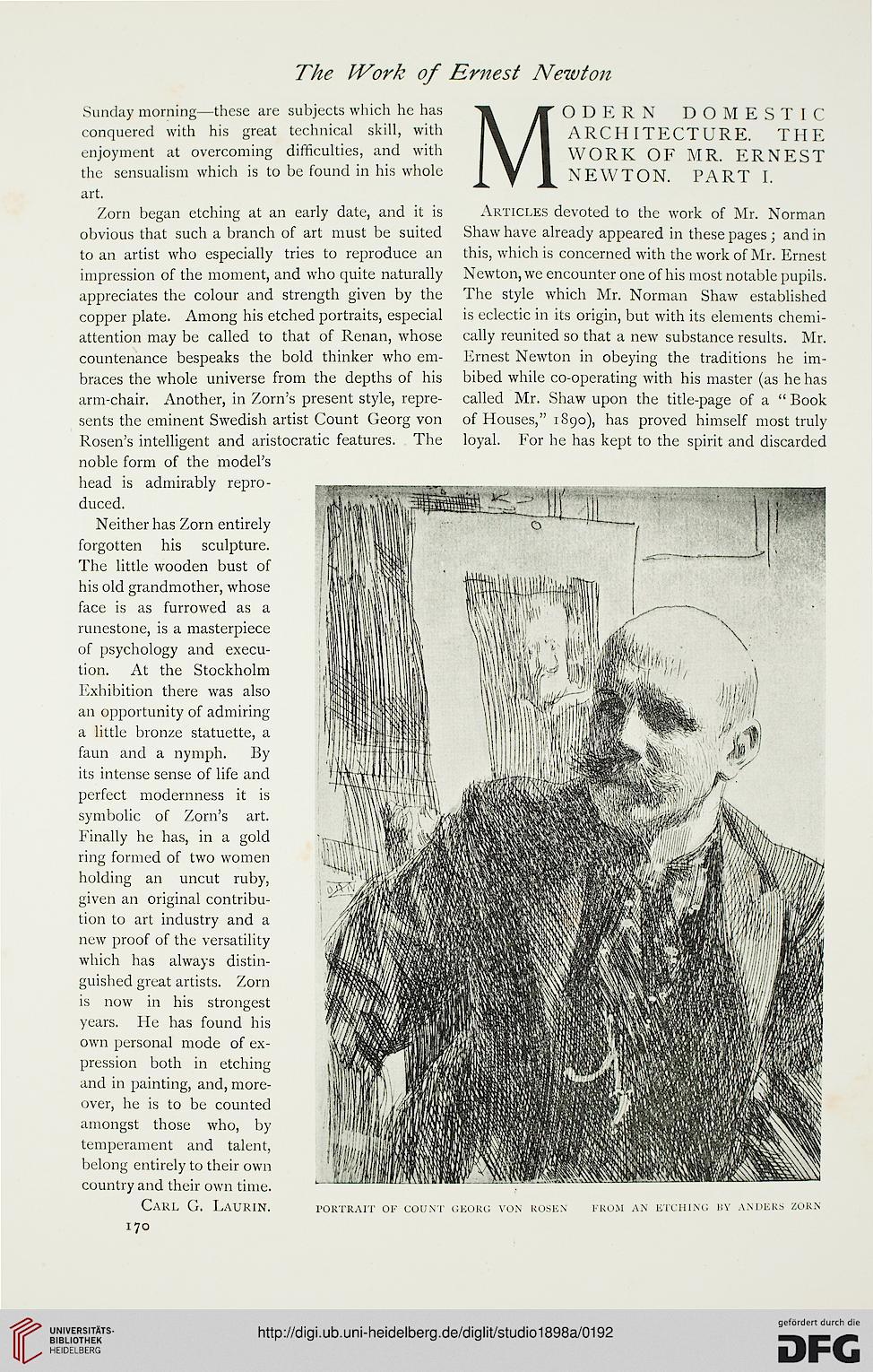 Information about OCR text
The IVork of Ernest Newton

conquered with his great technical skill, with \\ /■ ARCHITECTURE. THE

enjoyment at overcoming difficulties, and with I % / I WORK OF MR. ERNEST
the sensualism which is to be found in his whole y | NEWTON. PART I

Zorn began etching at an early date, and it is Articles devoted to the work of Mr. Norman
obvious that such a branch of art must be suited Shaw have already appeared in these pages ; and in
to an artist who especially tries to reproduce an this, which is concerned with the work of Mr. Ernest
impression of the moment, and who quite naturally Newton, we encounter one of his most notable pupils,
appreciates the colour and strength given by the The style which Mr. Norman Shaw established
copper plate. Among his etched portraits, especial is eclectic in its origin, but with its elements chemi-
attention may be called to that of Renan, whose cally reunited so that a new substance results. Mr.
countenance bespeaks the bold thinker who em- Ernest Newton in obeying the traditions he im-
braces the whole universe from the depths of his bibed while co-operating with his master (as he has
arm-chair. Another, in Zorn's present style, repre- called Mr. Shaw upon the title-page of a " Book
sents the eminent Swedish artist Count Georg von of Houses," 1890), has proved himself most truly
Rosen's intelligent and aristocratic features. The loyal. For he has kept to the spirit and discarded
noble form of the model's
head is admirably repro-
duced.

Neither has Zorn entirely
forgotten his sculpture.
The little wooden bust of
his old grandmother, whose
face is as furrowed as a
milestone, is a masterpiece
of psychology and execu-
tion. At the Stockholm
Exhibition there was also
an opportunity of admiring
a little bronze statuette, a
faun and a nymph. By
its intense sense of life and
perfect modernness it is
symbolic of Zorn's art.
Finally he has, in a gold
ring formed of two women
holding an uncut ruby,
given an original contribu-
tion to art industry and a
new proof of the versatility
which has always distin-
guished great artists. Zorn
is now in his strongest
years. He has found his
own personal mode of ex-
pression both in etching
and in painting, and, more-
over, he is to be counted
amongst those who, by
temperament and talent,
belong entirely to their own
country and their own time.