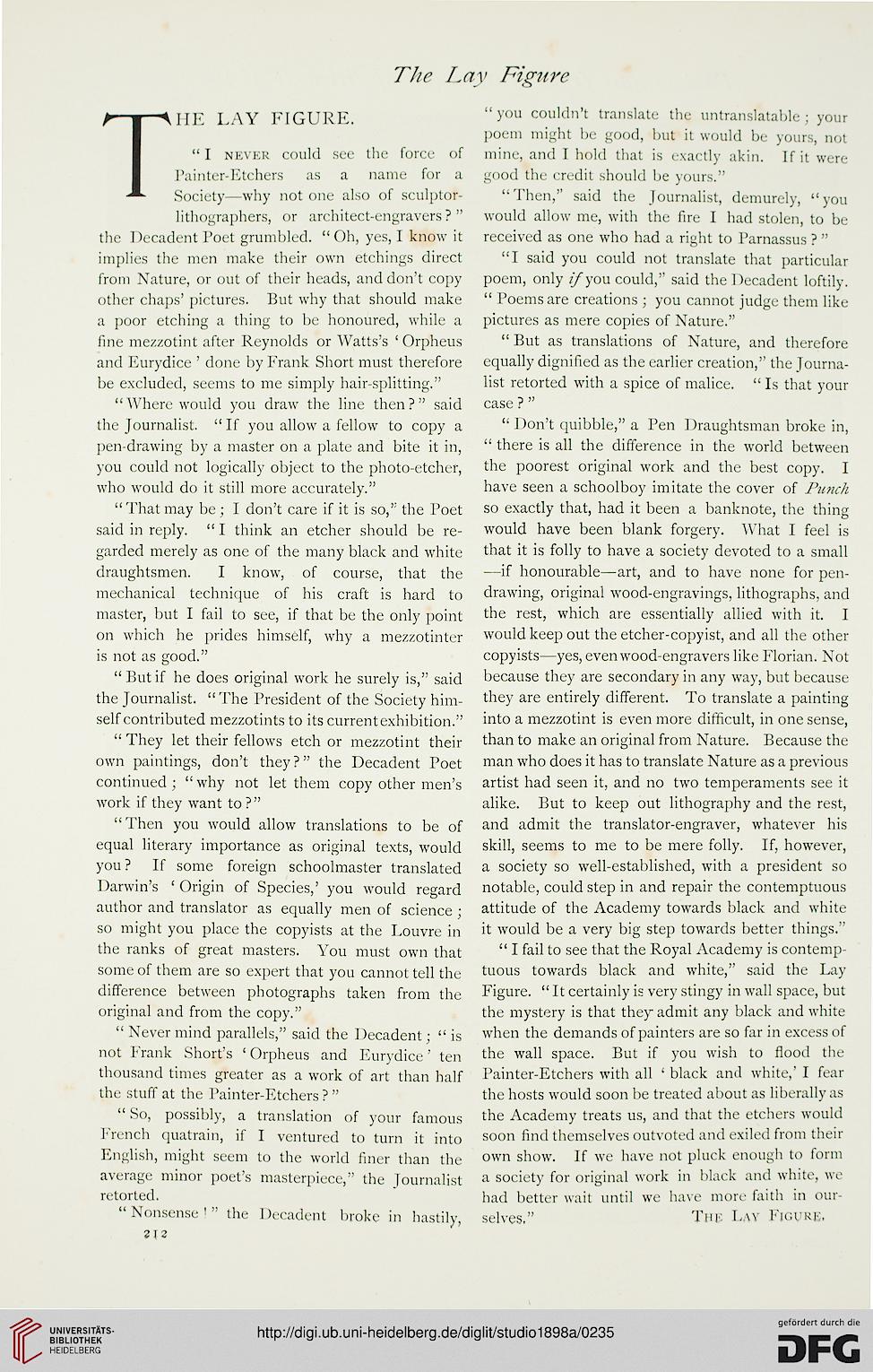 lithographers, or architect-engravers?"
the 1 )ecadent Poet grumbled. "Oh, yes, I know it
implies the men make their own etchings direct
from Nature, or out of their heads, and don't copy
other chaps' pictures. But why that should make
a poor etching a thing to be honoured, while a
fine mezzotint after Reynolds or Watts's 'Orpheus
and Eurydice ' done by Frank Short must therefore
be excluded, seems to me simply hair-splitting."

"Where would you draw the line then?" said
the Journalist. "If you allow a fellow to copy a
pen-drawing by a master on a plate and bite it in,
you could not logically object to the photo-etcher,
who would do it still more accurately."

"That may be j I don't care if it is so," the Poet
said in reply. " I think an etcher should be re-
garded merely as one of the many black and white
draughtsmen. I know, of course, that the
mechanical technique of his craft is hard to
master, but I fail to see, if that be the only point
on which he prides himself, why a mezzotinter
is not as good."

" But if he does original work he surely is," said
the Journalist. "The President of the Society him-
self contributed mezzotints to its currentexhibition."

" They let their fellows etch or mezzotint their
own paintings, don't they?" the Decadent Poet
continued ; "why not let them copy other men's
work if they want to?"

"Then you would allow translations to be of
equal literary importance as original texts, would
you ? If some foreign schoolmaster translated
Darwin's 'Origin of Species,' you would regard
author and translator as equally men of science ;
so might you place the copyists at the Louvre in
the ranks of great masters. You must own that
some of them are so expert that you cannot tell the
difference between photographs taken from the
original and from the copy."

" Never mind parallels," said the Decadent; " is
not Prank Short's ' Orpheus and Eurydice' ten
thousand times greater as a work of art than half
the stuff at the Painter-Etchers?"

" So, possibly, a translation of your famous
French quatrain, if I ventured to turn it into
English, might seem to the world finer than the
average minor poet's masterpiece," the Journalist
retorted.

"Nonsense'" the Decadent broke in hastily,

"you couldn't translate the untranslatable; your
poem might be good, but it would be yours, not
mine, and I hold that is exactly akin. If it were
good the credit should be yours."

"Then," said the Journalist, demurely, "you
would allow me, with the fire I had stolen, to be
received as one who had a right to Parnassus ? "

"I said you could not translate that particular
poem, only //you could," said the Decadent loftily.
" Poems are creations ; you cannot judge them like-
pictures as mere copies of Nature."

" But as translations of Nature, and therefore
equally dignified as the earlier creation," the Journa-
list retorted with a spice of malice. " Is that your
case ? "

" Don't quibble," a Pen Draughtsman broke in,
" there is all the difference in the world between
the poorest original work and the best copy. I
have seen a schoolboy imitate the cover of J^uncJi
so exactly that, had it been a banknote, the thing
would have been blank forgery. What I feel is
that it is folly to have a society devoted to a small
—if honourable—art, and to have none for pen-
drawing, original wood-engravings, lithographs, and
the rest, which are essentially allied with it. I
would keep out the etcher-copyist, and all the other
copyists—yes, even wood-engravers like Florian. Not
because they are secondary in any way, but because
they are entirely different. To translate a painting
into a mezzotint is even more difficult, in one sense,
than to make an original from Nature. Because the
man who does it has to translate Nature as a previous
artist had seen it, and no two temperaments see it
alike. But to keep out lithography and the rest,
and admit the translator-engraver, whatever his
skill, seems to me to be mere folly. If, however,
a society so well-established, with a president so
notable, could step in and repair the contemptuous
attitude of the Academy towards black and white
it would be a very big step towards better things."

" I fail to see that the Royal Academy is contemp-
tuous towards black and white," said the Lay
Figure. " It certainly is very stingy in wall space, but
the mystery is that they admit any black and white
when the demands of painters are so far in excess of
the wall space. But if you wish to flood the
Painter-Etchers with all ' black and white,' I fear
the hosts would soon be treated about as liberally as
the Academy treats us, and that the etchers would
soon find themselves outvoted and exiled from their
own show. If we have not pluck enough to form
a society for original work in black and white, we
had better wait until we have more faith in our-
selves." Tm Pw FlGVRB.