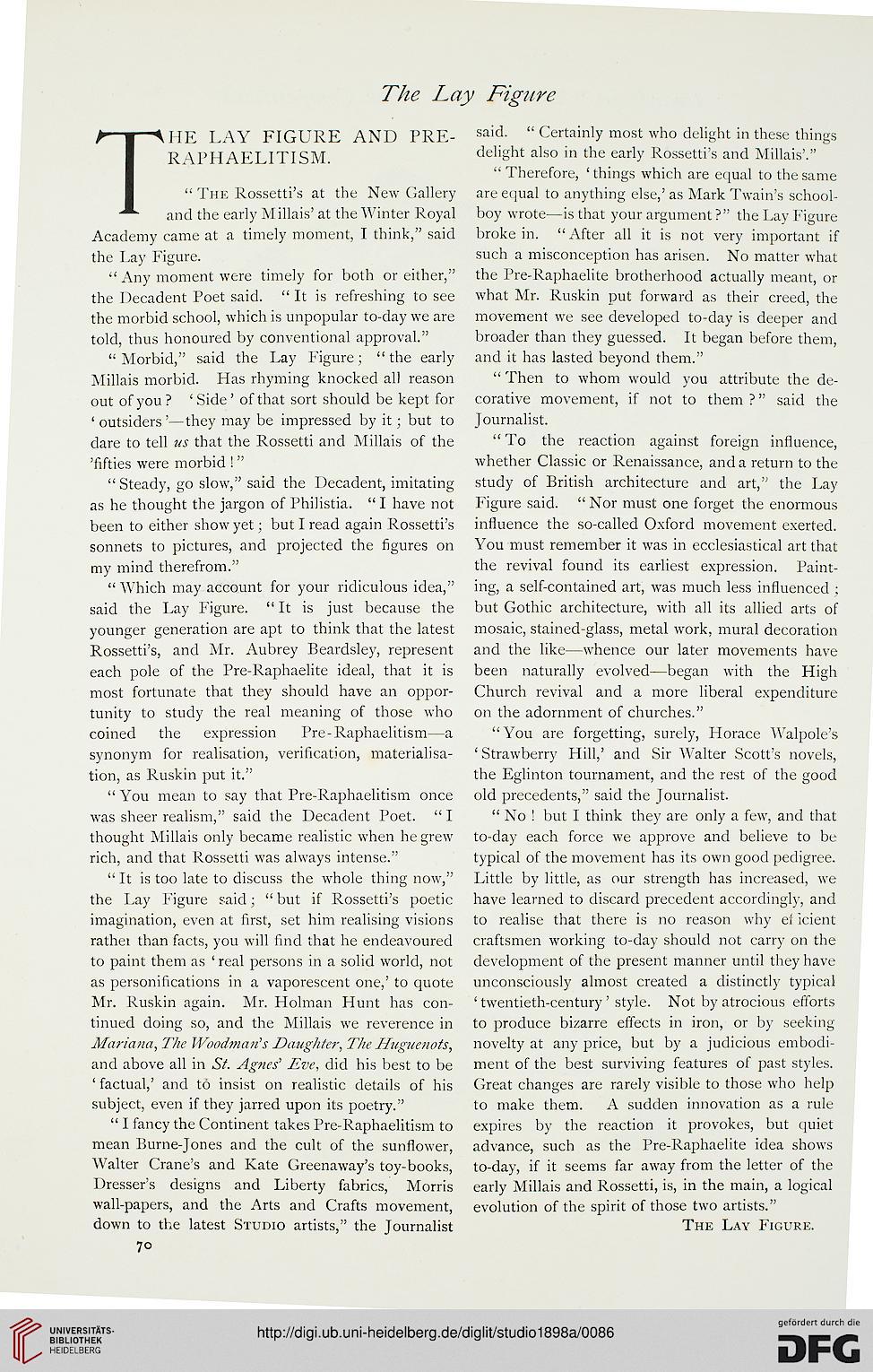 THE LAY FIGURE AND PRE-
RAPHAELITISM.
" The Rossetti's at the New Gallery
and the early Millais' at the Winter Royal
Academy came at a timely moment, I think," said
the Lay Figure.

" Any moment were timely for both or either,"
the Decadent Poet said. " It is refreshing to see
the morbid school, which is unpopular to-day we are
told, thus honoured by conventional approval."

" Morbid," said the Lay Figure; " the early
Millais morbid. Has rhyming knocked all reason
out of you ? ' Side' of that sort should be kept for
' outsiders '—they may be impressed by it; but to
dare to tell us that the Rossetti and Millais of the
'fifties were morbid ! "

" Steady, go slow," said the Decadent, imitating
as he thought the jargon of Philistia. " I have not
been to either show yet; but I read again Rossetti's
sonnets to pictures, and projected the figures on
my mind therefrom."

"Which may account for your ridiculous idea,"
said the Lay Figure. " It is just because the
younger generation are apt to think that the latest
Rossetti's, and Mr. Aubrey Beardsley, represent
each pole of the Pre-Raphaelite ideal, that it is
most fortunate that they should have an oppor-
tunity to study the real meaning of those who
coined the expression Pre-Raphaelitism—a
synonym for realisation, verification, materialisa-
tion, as Ruskin put it."

" You mean to say that Pre-Raphaelitism once
was sheer realism," said the Decadent Poet. "I
thought Millais only became realistic when he grew
rich, and that Rossetti was always intense."

" It is too late to discuss the whole thing now,"
the Lay Figure said; " but if Rossetti's poetic
imagination, even at first, set him realising visions
rathei than facts, you will find that he endeavoured
to paint them as ' real persons in a solid world, not
as personifications in a vaporescent one,' to quote
Mr. Ruskin again. Mr. Holman Hunt has con-
tinued doing so, and the Millais we reverence in
Mariana, The Woodman?s Daughter, The Huguenots,
and above all in St. Agnes' Eve, did his best to be
' factual,' and to insist on realistic details of his
subject, even if they jarred upon its poetry."

" I fancy the Continent takes Pre-Raphaelitism to
mean Burne-Jones and the cult of the sunflower,
Walter Crane's and Kate Greenaway's toy-books,
Dresser's designs and Liberty fabrics, Morris
wall-papers, and the Arts and Crafts movement,
down to the latest Studio artists," the Journalist
70

said. " Certainly most who delight in these things
delight also in the early Rossetti's and Millais'."

" Therefore, ' things which are equal to the same
are equal to anything else,' as Mark Twain's school-
boy wrote—is that your argument ?" the Lay Figure
broke in. "After all it is not very important if
such a misconception has arisen. No matter what
the Pre-Raphaelite brotherhood actually meant, or
what Mr. Ruskin put forward as their creed, the
movement we see developed to-day is deeper and
broader than they guessed. It began before them,
and it has lasted beyond them."

" Then to whom would you attribute the de-
corative movement, if not to them ?" said the
Journalist.

" To the reaction against foreign influence,
whether Classic or Renaissance, and a return to the
study of British architecture and art," the Lay
Figure said. " Nor must one forget the enormous
influence the so-called Oxford movement exerted.
You must remember it was in ecclesiastical art that
the revival found its earliest expression. Paint-
ing, a self-contained art, was much less influenced ;
but Gothic architecture, with all its allied arts of
mosaic, stained-glass, metal work, mural decoration
and the like—whence our later movements have
been naturally evolved—began with the High
Church revival and a more liberal expenditure
on the adornment of churches."

"You are forgetting, surely, Horace Walpole's
' Strawberry Hill,' and Sir WTalter Scott's novels,
the Eglinton tournament, and the rest of the good
old precedents," said the Journalist.

" No ! but I think they are only a few, and that
to-day each force we approve and believe to be
typical of the movement has its own good pedigree.
Little by little, as our strength has increased, we
have learned to discard precedent accordingly, and
to realise that there is no reason why ei icient
craftsmen working to-day should not carry on the
development of the present manner until they have
unconsciously almost created a distinctly typical
' twentieth-century ' style. Not by atrocious efforts
to produce bizarre effects in iron, or by seeking
novelty at any price, but by a judicious embodi-
ment of the best surviving features of past styles.
Great changes are rarely visible to those who help
to make them. A sudden innovation as a rule
expires by the reaction it provokes, but quiet
advance, such as the Pre-Raphaelite idea shows
to-day, if it seems far away from the letter of the
early Millais and Rossetti, is, in the main, a logical
evolution of the spirit of those two artists."