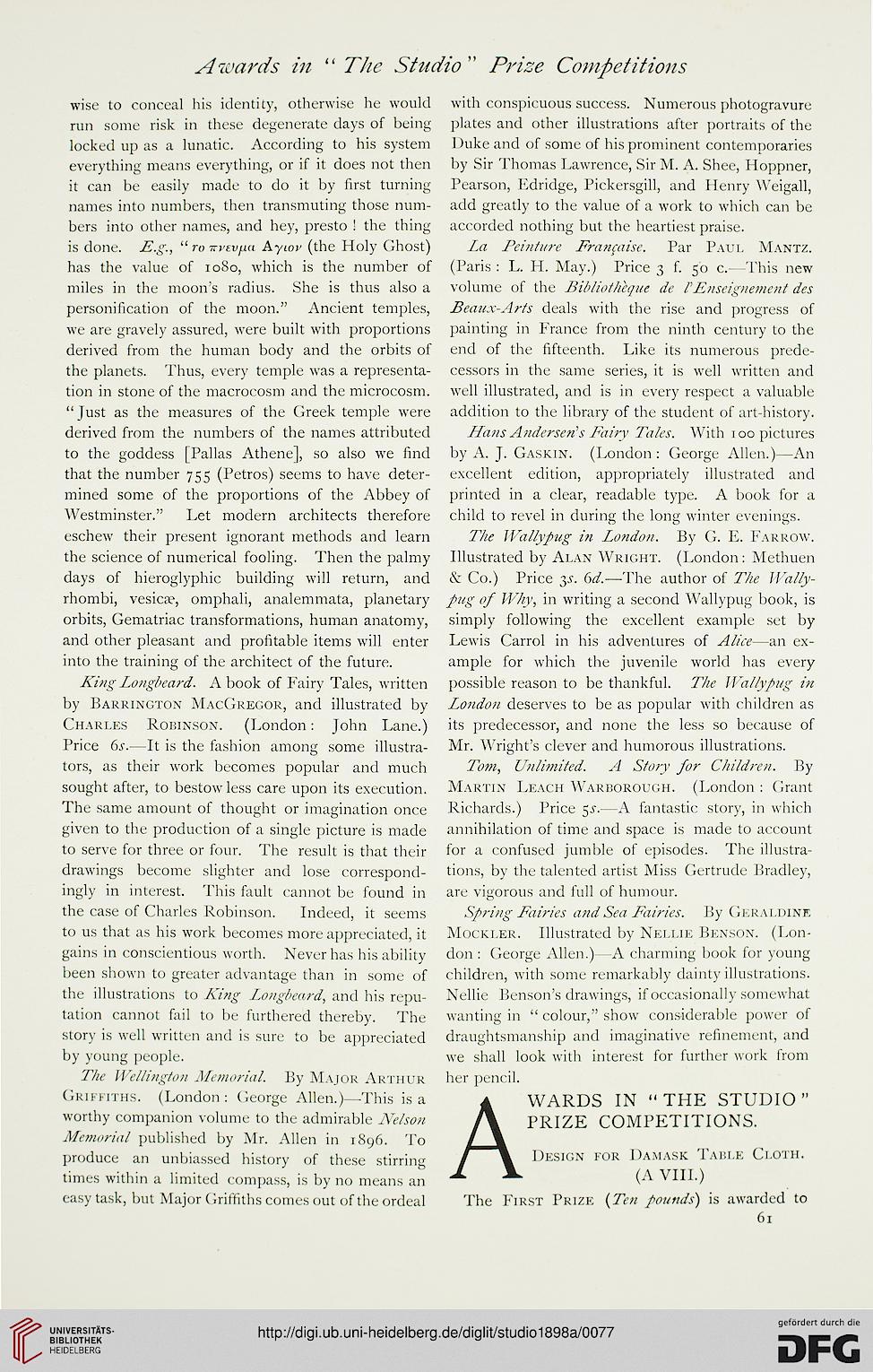 wise to conceal his identity, otherwise he would
run some risk in these degenerate days of being
locked up as a lunatic. According to his system
everything means everything, or if it does not then
it can be easily made to do it by first turning
names into numbers, then transmuting those num-
bers into other names, and hey, presto ! the thing
is done. F.g., " to ttvev^ui Aywv (the Holy Ghost)
has the value of 1080, which is the number of
miles in the moon's radius. She is thus also a
personification of the moon." Ancient temples,
we are gravely assured, were built with proportions
derived from the human body and the orbits of
the planets. Thus, every temple was a representa-
tion in stone of the macrocosm and the microcosm.
"Just as the measures of the Greek temple were
derived from the numbers of the names attributed
to the goddess [Pallas Athene], so also wre find
that the number 755 (Petros) seems to have deter-
mined some of the proportions of the Abbey of
Westminster." Let modern architects therefore
eschewr their present ignorant methods and learn
the science of numerical fooling. Then the palmy
days of hieroglyphic building will return, and
rhombi, vesica^, omphali, analemmata, planetary
orbits, Gematriac transformations, human anatomy,
and other pleasant and profitable items will enter
into the training of the architect of the future.

King Longbeard. A book of Fairy Tales, written
by Harrington MacGregor, and illustrated by
Charles Robinson. (London: John Lane.)
Price 6s.—It is the fashion among some illustra-
tors, as their work becomes popular and much
sought after, to bestowT less care upon its execution.
The same amount of thought or imagination once
given to the production of a single picture is made
to serve for three or four. The result is that their
drawings become slighter and lose correspond-
ingly in interest. This fault cannot be found in
the case of Charles Robinson. Indeed, it seems
to us that as his work becomes more appreciated, it
gains in conscientious worth. Never has his ability
been shown to greater advantage than in some of
the illustrations to King Longbeard^ and his repu-
tation cannot fail to be- furthered thereby. The
story is well written and is sure to be appreciated
by young people.

The Wellington Manorial. By Major Ar thur
griffiths. (London: George Allen.)—This is a
worthy companion volume to the admirable Nelson
Memorial published by Mr. Allen in 1896. To
produce an unbiassed history of these stirring
times within a limited c ompass, is by no means an
easy task, but Major (Griffiths comes out of the ordeal

with conspicuous success. Numerous photogravure
plates and other illustrations after portraits of the
1 hike and of some of his prominent contemporaries
by Sir Thomas Lawrence, Sir M. A. Shee, Hoppner,
Pearson, Edridge, Pickersgill, and Henry Weigall,
add greatly to the value of a work to which can be
accorded nothing but the heartiest praise.

La Feinture Francaise. Par Paul Mantz.
(Paris : L. H. May.) Price 3 f. 50 c- This new
volume of the Bibliothhjue de FEnseignement des
Beaux-Arts deals writh the rise and progress of
painting in France from the ninth century to the
end of the fifteenth. Like its numerous prede-
cessors in the same series, it is well written and
well illustrated, and is in every respect a valuable
addition to the library of the student of art-history.

Hans Andersen's Fairy Tales. With 100 pictures
by A. J. Gaskin. (London : George Allen.)—An
excellent edition, appropriately illustrated and
printed in a clear, readable type. A book for a
child to revel in during the long winter evenings.

The Wallypug in London. By G. E. Farrow.
Illustrated by Alan Wright. (London : Methuen
& Co.) Price $s. 6d.—The author of The Wally-
pug of Why, in writing a second Wallypug book, is
simply following the excellent example set by
Lewris Carrol in his adventures of Alice—an ex-
ample for which the juvenile world has every
possible reason to be thankful. The Wallypug in
London deserves to be as popular with children as
its predecessor, and none the less so because of
Mr. Wright's clever and humorous illustrations.

Tom, Unlimited. A Story for Children. By
Martin Leach Warborough. (London: Grant
Richards.) Price $s.—A fantastic story, in which
annihilation of time and space is made to account
for a confused jumble of episodes. The illustra-
tions, by the talented artist Miss Gertrude Bradley,
art' vigorous and full of humour.

Spring Fairies and Sea Fairies. By (\ e r a ldine
Mockler. Illustrated by Nellie Benson. (Lon-
don : George Allen.)—A charming book for young
children, with some remarkably dainty illustrations.
Nellie Benson's drawings, if occasionally somewhat
wanting in " colour," show considerable power of
draughtsmanship and imaginative refinement, and
we shall look with interest for further work from
her pencil.

AWARDS IN "THE STUDIO"
PRIZE COMPETITIONS.
Design for Damask Table Cloth.
( A VIII.)

The First Prize (Ten pounds) is awarded to