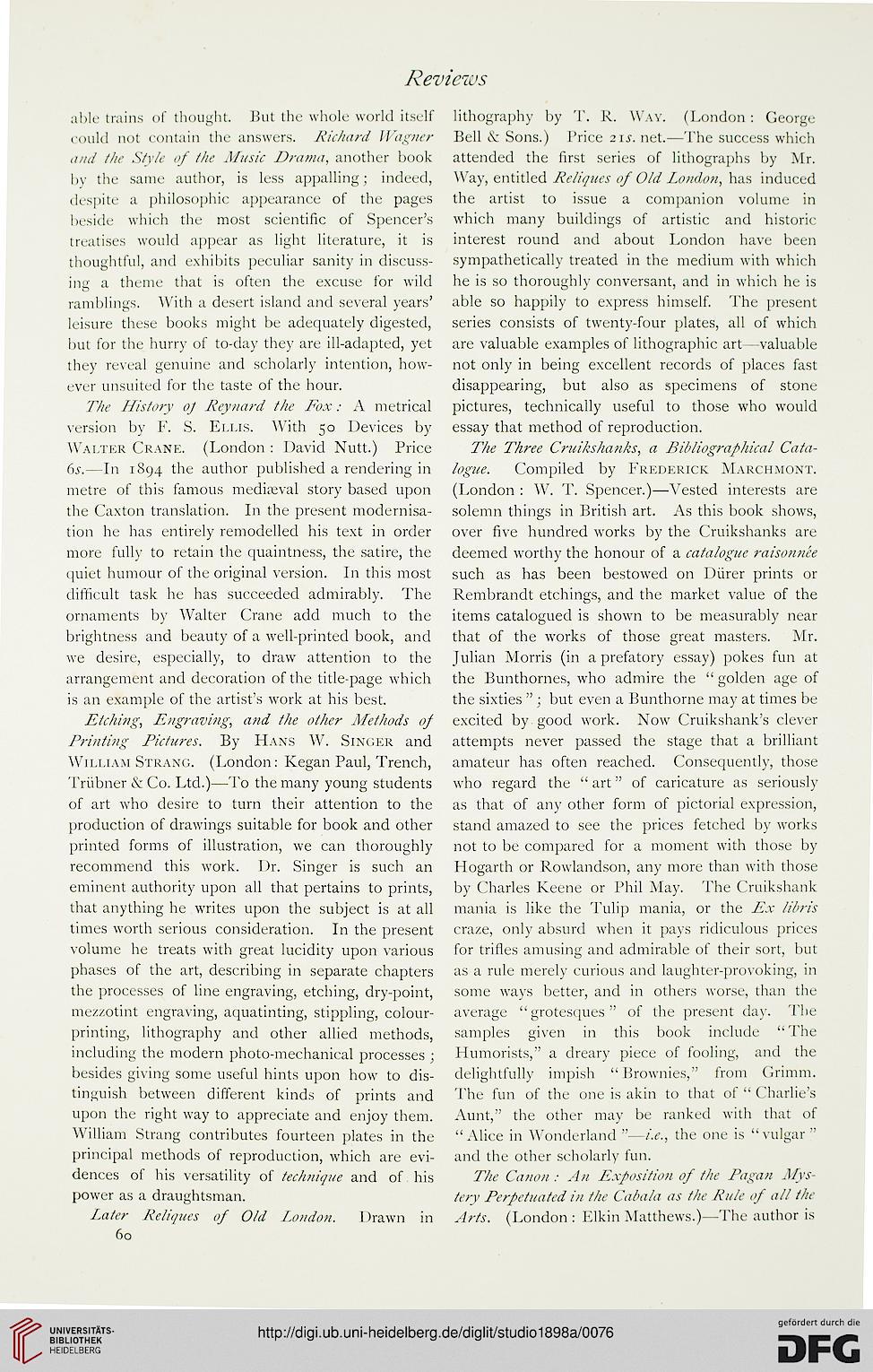 able trains of thought. But the whole world itself
could not contain the answers. Richard Wagner
<!//(/ the Style of the Music Drama, another hook
by the same author, is less appalling; indeed,
despite a philosophic appearance of the pages
beside which the most scientific of Spencer's
tnatises would appear as light literature, it is
thoughtful, and exhibits peculiar sanity in discuss-
ing a theme that is often the excuse for wild
ramblings. With a desert island and several years'
K isure these books might be adequately digested,
but for the hurry of to-day they are ill-adapted, yet
they reveal genuine and scholarly intention, how-
ever unsuited for the taste of the hour.

The History oj Rey?iard the Fox: A metrical
version by F. S. Ellis. With 50 Devices by
Walter Crane. (London : David Nutt.) Price
6s.—In 1894 the author published a rendering in
metre of this famous mediaeval story based upon
the Caxton translation. In the present modernisa-
tion he has entirely remodelled his text in order
more fully to retain the quaintness, the satire, the
quiet humour of the original version. In this most
difficult task he has succeeded admirably. The
ornaments by Walter Crane add much to the
brightness and beauty of a well-printed book, and
we desire, especially, to draw attention to the
arrangement and decoration of the title-page which
is an example of the artist's work at his best.

Etching, Engraving, and the other Methods of
Printing Pictures. By Hans W. Singer and
William Strang. (London: Kegan Paul, Trench,
Trubner & Co. Ltd.)—To the many young students
of art who desire to turn their attention to the
production of drawings suitable for book and other
printed forms of illustration, we can thoroughly
recommend this work. Dr. Singer is such an
eminent authority upon all that pertains to prints,
that anything he writes upon the subject is at all
times worth serious consideration. In the present
volume he treats with great lucidity upon various
phases of the art, describing in separate chapters
the processes of line engraving, etching, dry-point,
mezzotint engraving, aquatinting, stippling, colour-
printing, lithography and other allied methods,
including the modern photo-mechanical processes ;
besides giving some useful hints upon how to dis-
tinguish between different kinds of prints and
upon the right way to appreciate and enjoy them.
William Strang contributes fourteen plates in the
principal methods of reproduction, which are evi-
dences of his versatility of technique and of his
power as a draughtsman.

lithography by T. R. Way. (London : George
Bell & Sons.) Price 21s. net.—The success which
attended the first series of lithographs by Mr.
Way, entitled Reliques of Old London, has induced
the artist to issue a companion volume in
wrhich many buildings of artistic and historic
interest round and about London have been
sympathetically treated in the medium with which
he is so thoroughly conversant, and in which he is
able so happily to express himself. The present
series consists of twenty-four plates, all of which
are valuable examples of lithographic art—valuable
not only in being excellent records of places fast
disappearing, but also as specimens of stone
pictures, technically useful to those who would
essay that method of reproduction.

The Three Cruikshanks, a Bibliographical Cata-
logue. Compiled by Frederick March.mont.
(London : W. T. Spencer.)—Vested interests are
solemn things in British art. As this book shows,
over five hundred works by the Cruikshanks are
deemed worthy the honour of a catalogue raisonnee
such as has been bestowed on Diirer prints or
Rembrandt etchings, and the market value of the
items catalogued is showrn to be measurably near
that of the works of those great masters. Mr.
Julian Morris (in a prefatory essay) pokes fun at
the Bunthornes, who admire the " golden age of
the sixties " ; but even a Bunthorne may at times be
excited by good wrork. Now Cruikshank's clever
attempts never passed the stage that a brilliant
amateur has often reached. Consequently, those
who regard the " art" of caricature as seriously
as that of any other form of pictorial expression,
stand amazed to see the prices fetched by works
not to be compared for a moment with those by
Hogarth or Rowdandson, any more than with those
by Charles Keene or Phil May. The Cruikshank
mania is like the Tulip mania, or the Ex libris
craze, only absurd when it pays ridiculous prices
for trifles amusing and admirable of their sort, but
as a rule merely curious and laughter-provoking, in
some ways better, and in others worse, than the
average "grotesques" of the present day. The
samples given in this book include "The
Humorists," a dreary piece of fooling, and the
delightfully impish " Brownies," from Grimm.
The fun of the one is akin to that of " Charlie's
Aunt," the other may be ranked with that of
"Alice in Wonderland "—i.e., the one is "vulgar"
and the other scholarly fun.

The Canon: An Exposition of the Pagan Mrs
tery Perpetuated in the Cabala as the Rule of all the
Arts. (London : Elkin Matthews.)—The author is