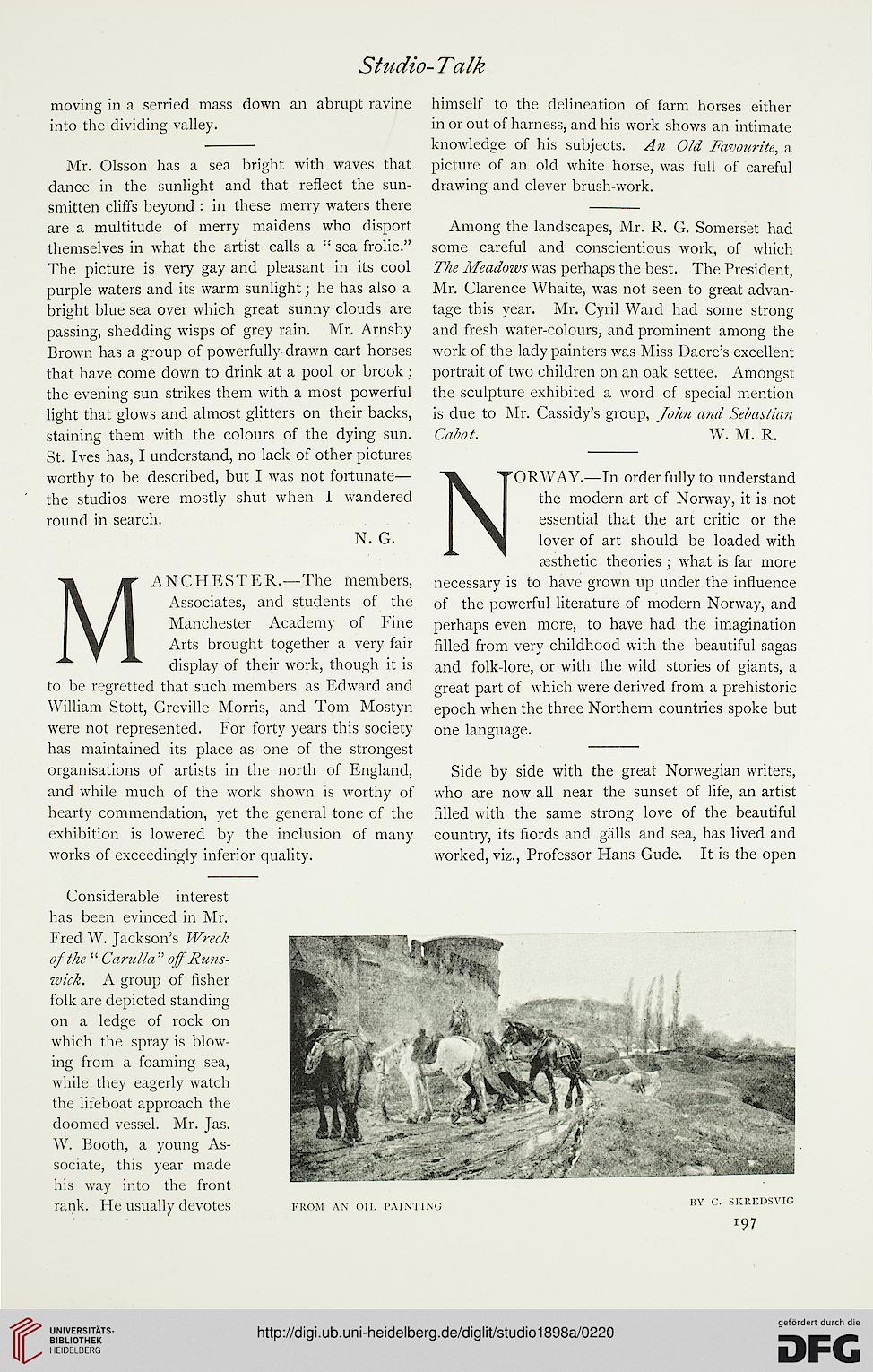 moving in a serried mass down an abrupt ravine
into the dividing valley.

Mr. Olsson has a sea bright with waves that
dance in the sunlight and that reflect the sun-
smitten cliffs beyond : in these merry waters there
are a multitude of merry maidens who disport
themselves in what the artist calls a " sea frolic."
The picture is very gay and pleasant in its cool
purple waters and its warm sunlight; he has also a
bright blue sea over which great sunny clouds are
passing, shedding wisps of grey rain. Mr. Arnsby
Brown has a group of powerfully-drawn cart horses
that have come down to drink at a pool or brook;
the evening sun strikes them with a most powerful
light that glows and almost glitters on their backs,
staining them with the colours of the dying sun.
St. Ives has, I understand, no lack of other pictures
worthy to be described, but I was not fortunate—
the studios were mostly shut when I wandered
round in search.

MANCHESTER.—The members,
Associates, and students of the
Manchester Academy of Fine
Arts brought together a very fair
display of their work, though it is
to be regretted that such members as Edward and
William Stott, Greville Morris, and Tom Mostyn
were not represented. For forty years this society
has maintained its place as one of the strongest
organisations of artists in the north of England,
and while much of the work shown is worthy of
hearty commendation, yet the general tone of the
exhibition is lowered by the inclusion of many
works of exceedingly inferior quality.

himself to the delineation of farm horses either
in or out of harness, and his work shows an intimate
knowledge of his subjects. An Old Favourite, a
picture of an old white horse, was full of careful
drawing and clever brush-work.

Among the landscapes, Mr. R. G. Somerset had
some careful and conscientious work, of which
The Meadows was perhaps the best. The President,
Mr. Clarence Whaite, was not seen to great advan-
tage this year. Mr. Cyril Ward had some strong
and fresh water-colours, and prominent among the
work of the lady painters was Miss Dacre's excellent
portrait of two children on an oak settee. Amongst
the sculpture exhibited a word of special mention
is due to Mr. Cassidy's group, John and Sebastian
Cabot. W. M. R.

NORWAY.—In order fully to understand
the modern art of Norway, it is not
essential that the art critic or the
lover of art should be loaded with
aesthetic theories ; what is far more
necessary is to have grown up under the influence
of the powerful literature of modern Norway, and
perhaps even more, to have had the imagination
filled from very childhood with the beautiful sagas
and folk-lore, or with the wild stories of giants, a
great part of which were derived from a prehistoric
epoch when the three Northern countries spoke but
one language.

Side by side with the great Norwegian writers,
who are now all near the sunset of life, an artist
filled with the same strong love of the beautiful
country, its fiords and galls and sea, has lived and
worked, viz., Professor Hans Gude. It is the open

Considerable interest
has been evinced in Mr.