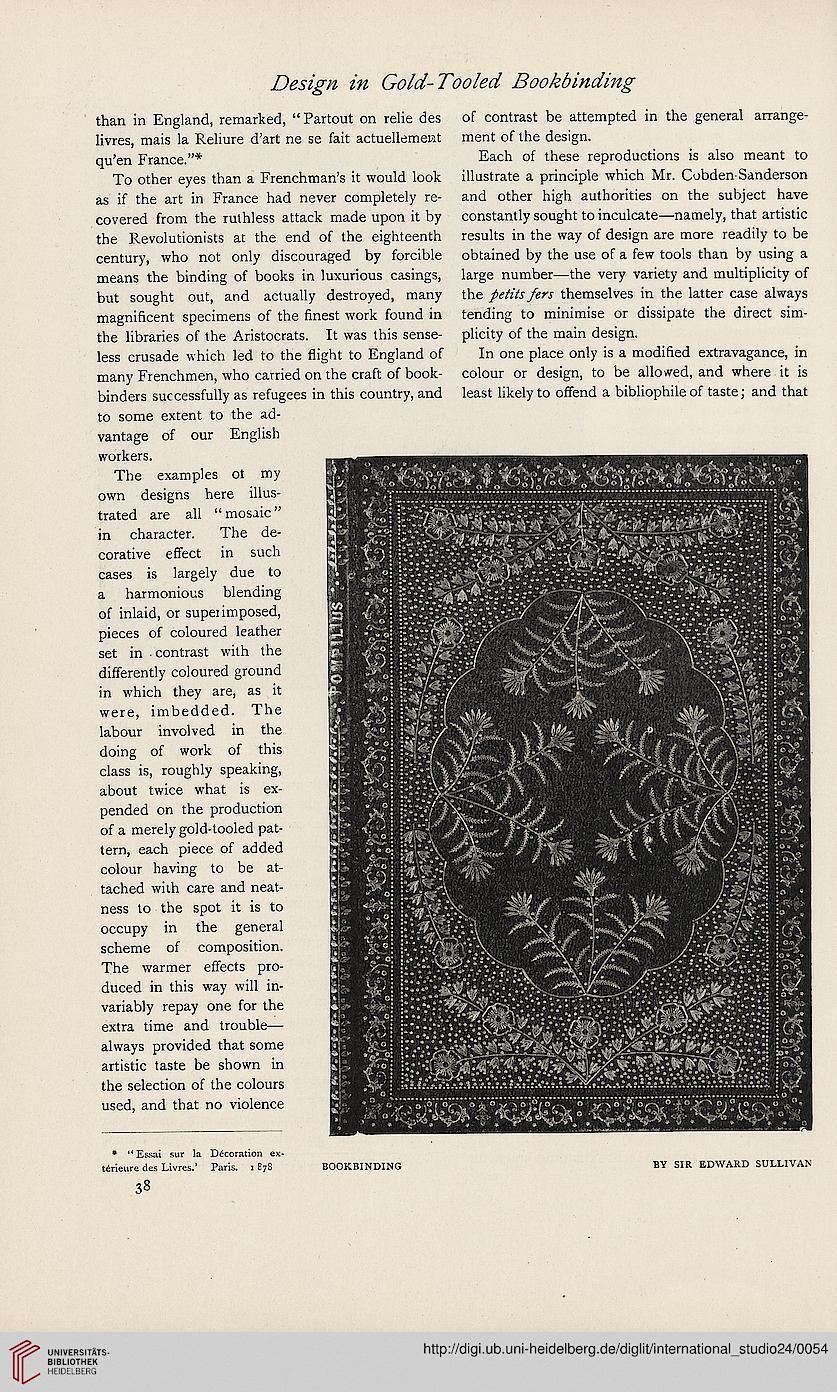 
than in England, remarked, “Partout on relie des
livres, mais la Reliure d’art ne se fait actuellement
qu’en France.”*
To other eyes than a Frenchman’s it would look
as if the art in France had never completely re-
covered from the ruthless attack made upon it by
the Revolutionists at the end of the eighteenth
century, who not only discouraged by forcible
means the binding of books in luxurious casings,
but sought out, and actually destroyed, many
magnificent specimens of the finest work found in
the libraries of the Aristocrats. It was this sense-
less crusade which led to the flight to England of
many Frenchmen, who carried on the craft of book-
binders successfully as refugees in this country, and
to some extent to the ad-
vantage of our English
workers.
The examples ot my
own designs here illus-
trated are all “ mosaic ”
in character. The de-
corative effect in such
cases is largely due to
a harmonious blending
of inlaid, or supeiimposed,
pieces of coloured leather
set in • contrast with the
differently coloured ground
in which they are, as it
were, imbedded. The
labour involved in the
doing of work of this
class is, roughly speaking,
about twice what is ex-
pended on the production
of a merely gold-tooled pat-
tern, each piece of added
colour having to be at-
tached with care and neat-
ness to the spot it is to
occupy in the general
scheme of composition.
The warmer effects pro-
duced in this way will in-
variably repay one for the
extra time and trouble—
always provided that some
artistic taste be shown in
the selection of the colours

of contrast be attempted in the general arrange-
ment of the design.
Each of these reproductions is also meant to
illustrate a principle which Mr. Cobden-Sanderson
and other high authorities on the subject have
constantly sought to inculcate—namely, that artistic
results in the way of design are more readily to be
obtained by the use of a few tools than by using a
large number—the very variety and multiplicity of
the petits fers themselves in the latter case always
tending to minimise or dissipate the direct sim-
plicity of the main design.
In one place only is a modified extravagance, in
colour or design, to be allowed, and where it is
least likely to offend a bibliophile of taste; and that

used, and that no violence