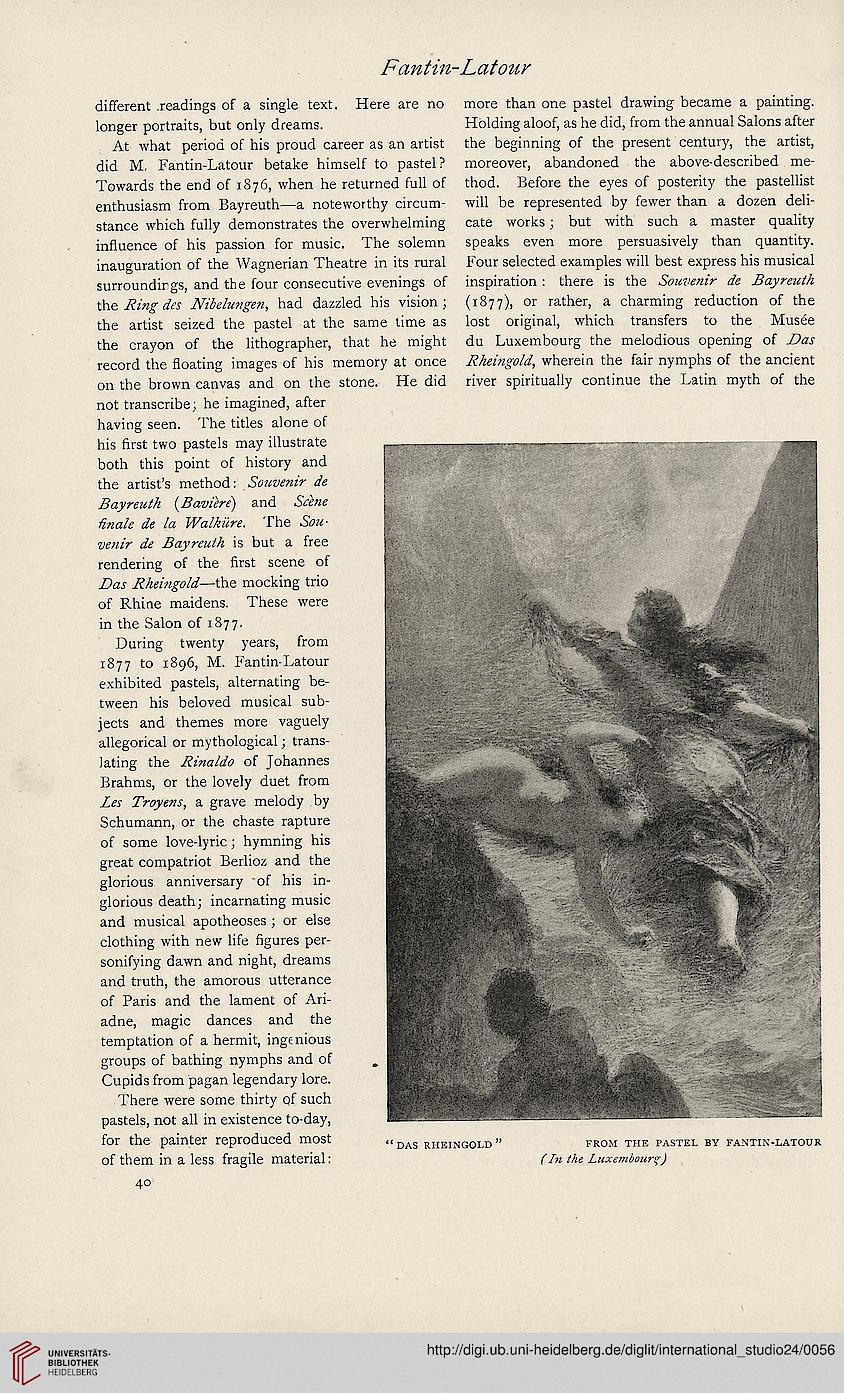 different readings of a single text. Here are no
longer portraits, but only dreams.
At what period of his proud career as an artist
did M, Fantin-Latour betake himself to pastel ?
Towards the end of 1876, when he returned full of
enthusiasm from Bayreuth—a noteworthy circum-
stance which fully demonstrates the overwhelming
influence of his passion for music. The solemn
inauguration of the Wagnerian Theatre in its rural
surroundirgs, and the four consecutive evenings of
the Ring des Nibelungen, had dazzled his vision ;
the artist seized the pastel at the same time as
the crayon of the lithographer, that he might
record the floating images of his memory at once
on the brown canvas and on the stone. He did
not transcribe; he imagined, after
having seen. The titles alone of
his first two pastels may illustrate
both this point of history and
the artist’s method: Souvenir de
Bayreuth (Baviere) and Scene
finale de la Walkiire. The Sou-
venir de Bayreuth is but a free
rendering of the first scene of
Das Rheingold—the mocking trio
of Rhine maidens. These were
in the Salon of 1877.
During twenty years, from
1877 to 1896, M. Fantin-Latour
exhibited pastels, alternating be-
tween his beloved musical sub-
jects and themes more vaguely
allegorical or mythological; trans-
lating the Rinaldo of Johannes
Brahms, or the lovely duet from
Les Troyens, a grave melody by
Schumann, or the chaste rapture
of some love-lyric; hymning his
great compatriot Berlioz and the
glorious anniversary of his in-
glorious death; incarnating music
and musical apotheoses ; or else
clothing with new life figures per-
sonifying dawn and night, dreams
and truth, the amorous utterance
of Paris and the lament of Ari-
adne, magic dances and the
temptation of a hermit, ingenious
groups of bathing nymphs and of
Cupids from pagan legendary lore.
There were some thirty of such
pastels, not all in existence to-day,
for the painter reproduced most
of them in a less fragile material:

more than one pastel drawing became a painting.
Holding aloof, as he did, from the annual Salons after
the beginning of the present century, the artist,
moreover, abandoned the above-described me-
thod. Before the eyes of posterity the pastellist
will be represented by fewer than a dozen deli-
cate works; but with such a master quality
speaks even more persuasively than quantity.
Four selected examples will best express his musical
inspiration: there is the Souvenir de Bayreuth
(1877), or rather, a charming reduction of the
lost original, which transfers to the Musee
du Luxembourg the melodious opening of Das
Rheingold, wherein the fair nymphs of the ancient
river spiritually continue the Latin myth of the


“DAS RHEINGOLD” FROM THE PASTEL BY FANTIN-LATOUR
(In the Luxembourg)