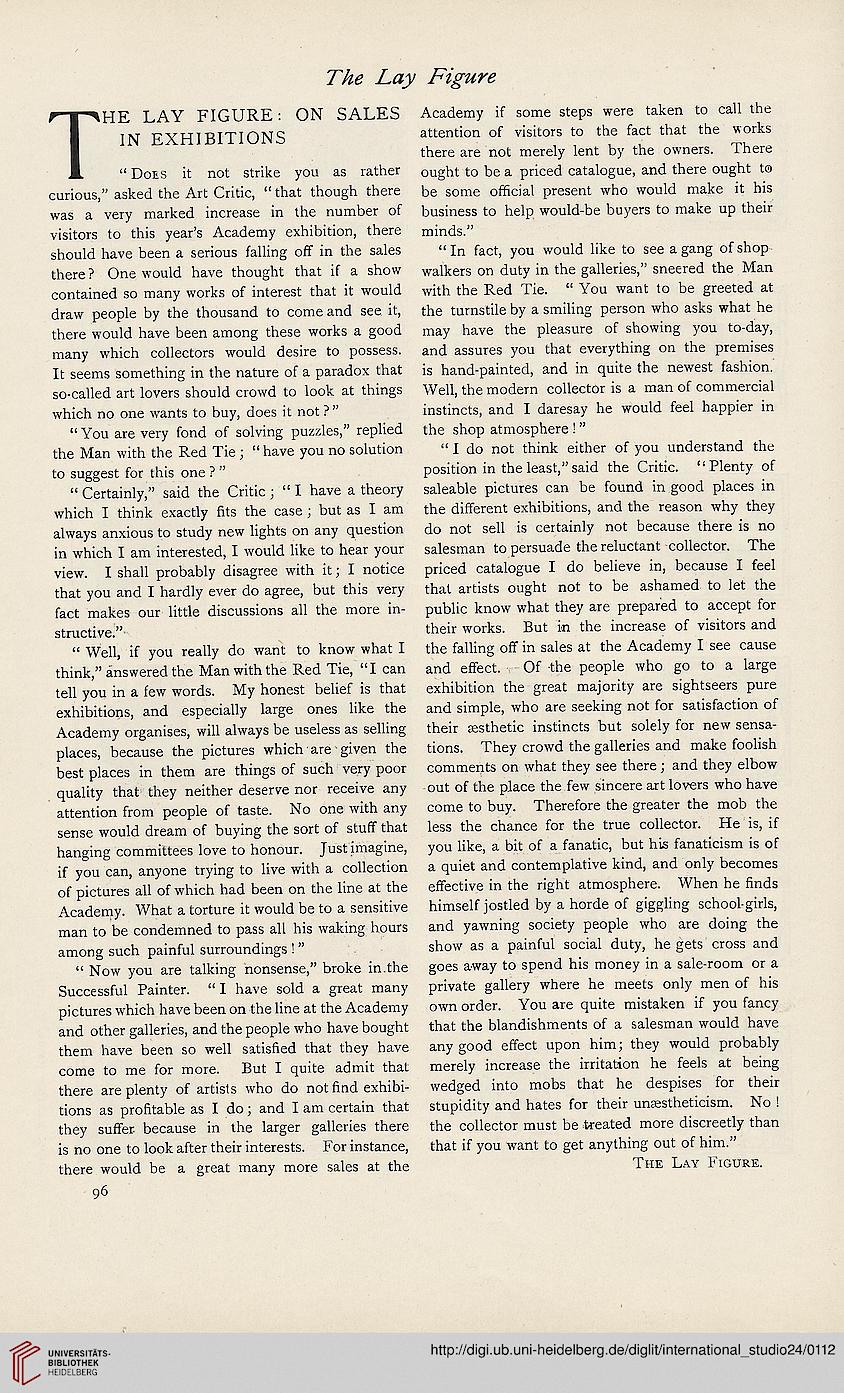 HE LAY FIGURE: ON SALES
IN EXHIBITIONS

“ Does it not strike you as rather
curious,” asked the Art Critic, “ that though there
was a very marked increase in the number of
visitors to this year’s Academy exhibition, there
should have been a serious falling off in the sales
there? One would have thought that if a show
contained so many works of interest that it would
draw people by the thousand to come and see it,
there would have been among these works a good
many which collectors would desire to possess.
It seems something in the nature of a paradox that
so-called art lovers should crowd to look at things
which no one wants to buy, does it not ?”
“ You are very fond of solving puzzles,” replied
the Man with the Red Tie ; “have you no solution
to suggest for this one ? ”
“ Certainly,” said the Critic ; “ I have a theory
which I think exactly fits the case ; but as I am
always anxious to study new lights on any question
in which I am interested, I would like to hear your
view. I shall probably disagree with it; I notice
that you and I hardly ever do agree, but this very
fact makes our little discussions all the more in-
structive.”
“ Well, if you really do want to know what I
think,” answered the Man with the Red Tie, “I can
tell you in a few words. My honest belief is that
exhibitions, and especially large ones like the
Academy organises, will always be useless as selling
places, because the pictures which are given the
best places in them are things of such very poor
quality that they neither deserve nor receive any
attention from people of taste. No one with any
sense would dream of buying the sort of stuff that
hanging committees love to honour. Just imagine,
if you can, anyone trying to live with a collection
of pictures all of which had been on the line at the
Academy. What a torture it would be to a sensitive
man to be condemned to pass all his waking hours
among such painful surroundings ! ”
“ Now you are talking nonsense,” broke in the
Successful Painter. “ I have sold a great many
pictures which have been on the line at the Academy
and other galleries, and the people who have bought
them have been so well satisfied that they have
come to me for more. But I quite admit that
there are plenty of artists who do not find exhibi-
tions as profitable as I do; and I am certain that
they suffer- because in the larger galleries there
is no one to look after their interests. For instance,
there would be a great many more sales at the
96

Academy if some steps were taken to call the
attention of visitors to the fact that the works
there are not merely lent by the owners. There
ought to be a priced catalogue, and there ought to
be some official present who would make it his
business to help would-be buyers to make up their
minds.”
“In fact, you would like to see a gang of shop
walkers on duty in the galleries,” sneered the Man
with the Red Tie. “ You want to be greeted at
the turnstile by a smiling person who asks what he
may have the pleasure of showing you to-day,
and assures you that everything on the premises
is hand-painted, and in quite the newest fashion.
Well, the modern collector is a man of commercial
instincts, and I daresay he would feel happier in
the shop atmosphere ! ”
“ I do not think either of you understand the
position in the least,”said the Critic. “Plenty of
saleable pictures can be found in good places in
the different exhibitions, and the reason why they
do not sell is certainly not because there is no
salesman to persuade the reluctant collector. The
priced catalogue I do believe in, because I feel
that artists ought not to be ashamed to let the
public know what they are prepared to accept for
their works. But in the increase of visitors and
the falling off in sales at the Academy I see cause
and effect. Of the people who go to a large
exhibition the great majority are sightseers pure
and simple, who are seeking not for satisfaction of
their aesthetic instincts but solely for new sensa-
tions. They crowd the galleries and make foolish
comments on what they see there; and they elbow
out of the place the few sincere art lovers who have
come to buy. Therefore the greater the mob the
less the chance for the true collector. He is, if
you like, a bit of a fanatic, but his fanaticism is of
a quiet and contemplative kind, and only becomes
effective in the right atmosphere. When he finds
himself jostled by a horde of giggling school-girls,
and yawning society people who are doing the
show as a painful social duty, he gets cross and
goes away to spend his money in a sale-room or a
private gallery where he meets only men of his
own order. You are quite mistaken if you fancy
that the blandishments of a salesman would have
any good effect upon him; they would probably
merely increase the irritation he feels at being
wedged into mobs that he despises for their
stupidity and hates for their unsestheticism. No !
the collector must be treated more discreetly than
that if you want to get anything out of him.”
The Lay Figure.