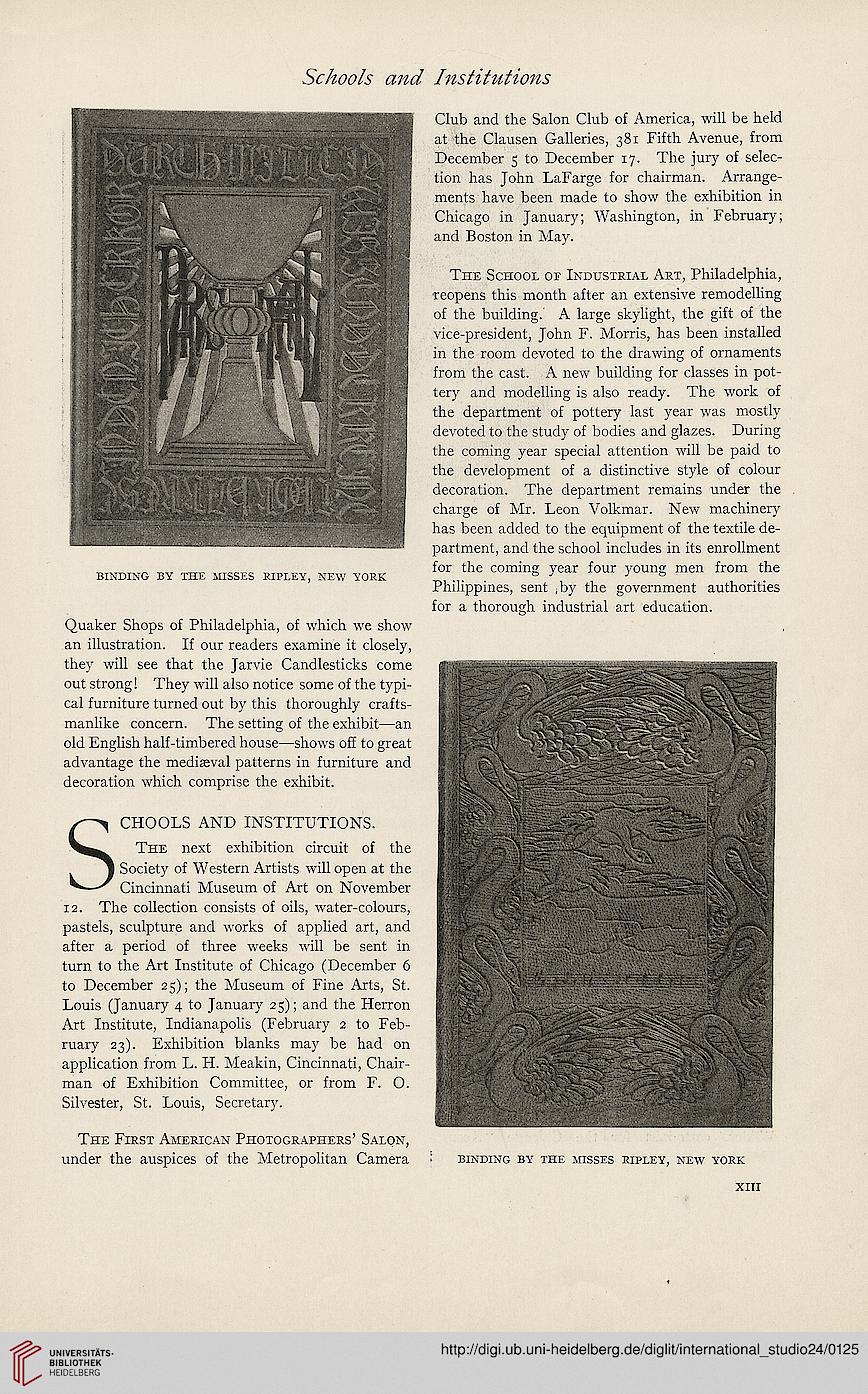 Quaker Shops of Philadelphia, of which we show
an illustration. If our readers examine it closely,
they will see that the Jarvie Candlesticks come
out strong! They will also notice some of the typi-
cal furniture turned out by this thoroughly crafts-
manlike concern. The setting of the exhibit—an
old English half-timbered house—shows off to great
advantage the mediaeval patterns in furniture and
decoration which comprise the exhibit.
CHOOLS AND INSTITUTIONS.
The next exhibition circuit of the
Society of Western Artists will open at the
Cincinnati Museum of Art on November
12. The collection consists of oils, water-colours,
pastels, sculpture and works of applied art, and
after a period of three weeks will be sent in
turn to the Art Institute of Chicago (December 6
to December 25); the Museum of Fine Arts, St.
Louis (January 4 to January 25); and the Herron
Art Institute, Indianapolis (February 2 to Feb-
ruary 23). Exhibition blanks may be had on
application from L. H. Meakin, Cincinnati, Chair-
man of Exhibition Committee, or from F. O.
Silvester, St. Louis, Secretary.
The First American Photographers’ Salon,
under the auspices of the Metropolitan Camera

Club and the Salon Club of America, will be held
at the Clausen Galleries, 381 Fifth Avenue, from
December 5 to December 17. The jury of selec-
tion has John LaFarge for chairman. Arrange-
ments have been made to show the exhibition in
Chicago in January; Washington, in February;
and Boston in May.
The School of Industrial Art, Philadelphia,
reopens this month after an extensive remodelling
of the building. A large skylight, the gift of the
vice-president, John F. Morris, has been installed
in the room devoted to the drawing of ornaments
from the cast. A new building for classes in pot-
tery and modelling is also ready. The work of
the department of pottery last year was mostly
devoted to the study of bodies and glazes. During
the coming year special attention will be paid to
the development of a distinctive style of colour
decoration. The department remains under the
charge of Mr. Leon Volkmar. New machinery
has been added to the equipment of the textile de-
partment, and the school includes in its enrollment
for the coming year four young men from the
Philippines, sent ,by the government authorities
for a thorough industrial art education.