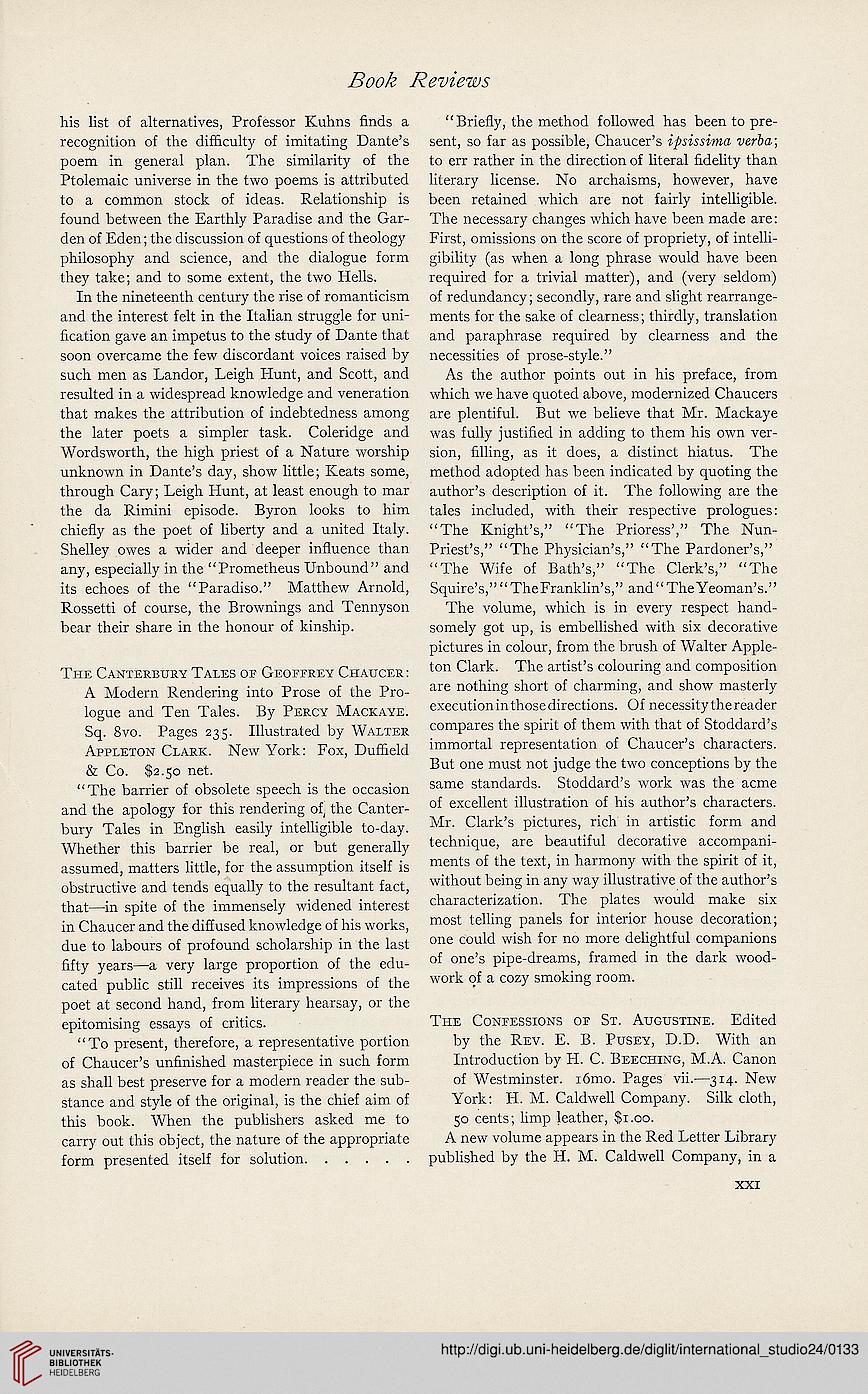 his list of alternatives, Professor Kuhns finds a
recognition of the difficulty of imitating Dante’s
poem in general plan. The similarity of the
Ptolemaic universe in the two poems is attributed
to a common stock of ideas. Relationship is
found between the Earthly Paradise and the Gar-
den of Eden; the discussion of questions of theology
philosophy and science, and the dialogue form
they take; and to some extent, the two Hells.
In the nineteenth century the rise of romanticism
and the interest felt in the Italian struggle for uni-
fication gave an impetus to the study of Dante that
soon overcame the few discordant voices raised by
such men as Landor, Leigh Hunt, and Scott, and
resulted in a widespread knowledge and veneration
that makes the attribution of indebtedness among
the later poets a simpler task. Coleridge and
Wordsworth, the high priest of a Nature worship
unknown in Dante’s day, show little; Keats some,
through Cary; Leigh Hunt, at least enough to mar
the da Rimini episode. Byron looks to him
chiefly as the poet of liberty and a united Italy.
Shelley owes a wider and deeper influence than
any, especially in the “Prometheus Unbound” and
its echoes of the “Paradiso.” Matthew Arnold,
Rossetti of course, the Brownings and Tennyson
bear their share in the honour of kinship.
The Canterbury Tales of Geoffrey Chaucer:
A Modern Rendering into Prose of the Pro-
logue and Ten Tales. By Percy Mackaye.
Sq. 8vo. Pages 235. Illustrated by Walter
Appleton Clark. New York: Fox, Duffield
& Co. $2.50 net.
“The barrier of obsolete speech is the occasion
and the apology for this rendering of, the Canter-
bury Tales in English easily intelligible to-day.
Whether this barrier be real, or but generally
assumed, matters little, for the assumption itself is
obstructive and tends equally to the resultant fact,
that—in spite of the immensely widened interest
in Chaucer and the diffused knowledge of his works,
due to labours of profound scholarship in the last
fifty years—a very large proportion of the edu-
cated public still receives its impressions of the
poet at second hand, from literary hearsay, or the
epitomising essays of critics.
“To present, therefore, a representative portion
of Chaucer’s unfinished masterpiece in such form
as shall best preserve for a modern reader the sub-
stance and style of the original, is the chief aim of
this book. When the publishers asked me to
carry out this object, the nature of the appropriate
form presented itself for solution.

“Briefly, the method followed has been to pre-
sent, so far as possible, Chaucer’s ipsissima verba;
to err rather in the direction of literal fidelity than
literary license. No archaisms, however, have
been retained which are not fairly intelligible.
The necessary changes which have been made are:
First, omissions on the score of propriety, of intelli-
gibility (as when a long phrase would have been
required for a trivial matter), and (very seldom)
of redundancy; secondly, rare and slight rearrange-
ments for the sake of clearness; thirdly, translation
and paraphrase required by clearness and the
necessities of prose-style.”
As the author points out in his preface, from
which we have quoted above, modernized Chaucers
are plentiful. But we believe that Mr. Mackaye
was fully justified in adding to them his own ver-
sion, filling, as it does, a distinct hiatus. The
method adopted has been indicated by quoting the
author’s description of it. The following are the
tales included, with their respective prologues:
“The Knight’s,” “The Prioress’,” The Nun-
Priest’s,” “The Physician’s,” “The Pardoner’s,”
“The Wife of Bath’s,” “The Clerk’s,” “The
Squire’s,” ‘ ‘ The Franklin’s,” and ‘ ‘ The Yeoman’s. ”
The volume, which is in every respect hand-
somely got up, is embellished with six decorative
pictures in colour, from the brush of Walter Apple-
ton Clark. The artist’s colouring and composition
are nothing short of charming, and show masterly
executioninthosedirections. Of necessity the reader
compares the spirit of them with that of Stoddard’s
immortal representation of Chaucer’s characters.
But one must not judge the two conceptions by the
same standards. Stoddard’s work was the acme
of excellent illustration of his author’s characters.
Mr. Clark’s pictures, rich in artistic form and
technique, are beautiful decorative accompani-
ments of the text, in harmony with the spirit of it,
without being in any way illustrative of the author’s
characterization. The plates would make six
most telling panels for interior house decoration;
one could wish for no more delightful companions
of one’s pipe-dreams, framed in the dark wood-
work of a cozy smoking room.
The Confessions of St. Augustine. Edited
by the Rev. E. B. Pusey, D.D. With an
Introduction by H. C. Beeching, M.A. Canon
of Westminster. i6mo. Pages vii.—314. New
York: H. M. Caldwell Company. Silk cloth,
50 cents; limp leather, $1.00.
A new volume appears in the Red Letter Library
published by the H. M. Caldwell Company, in a