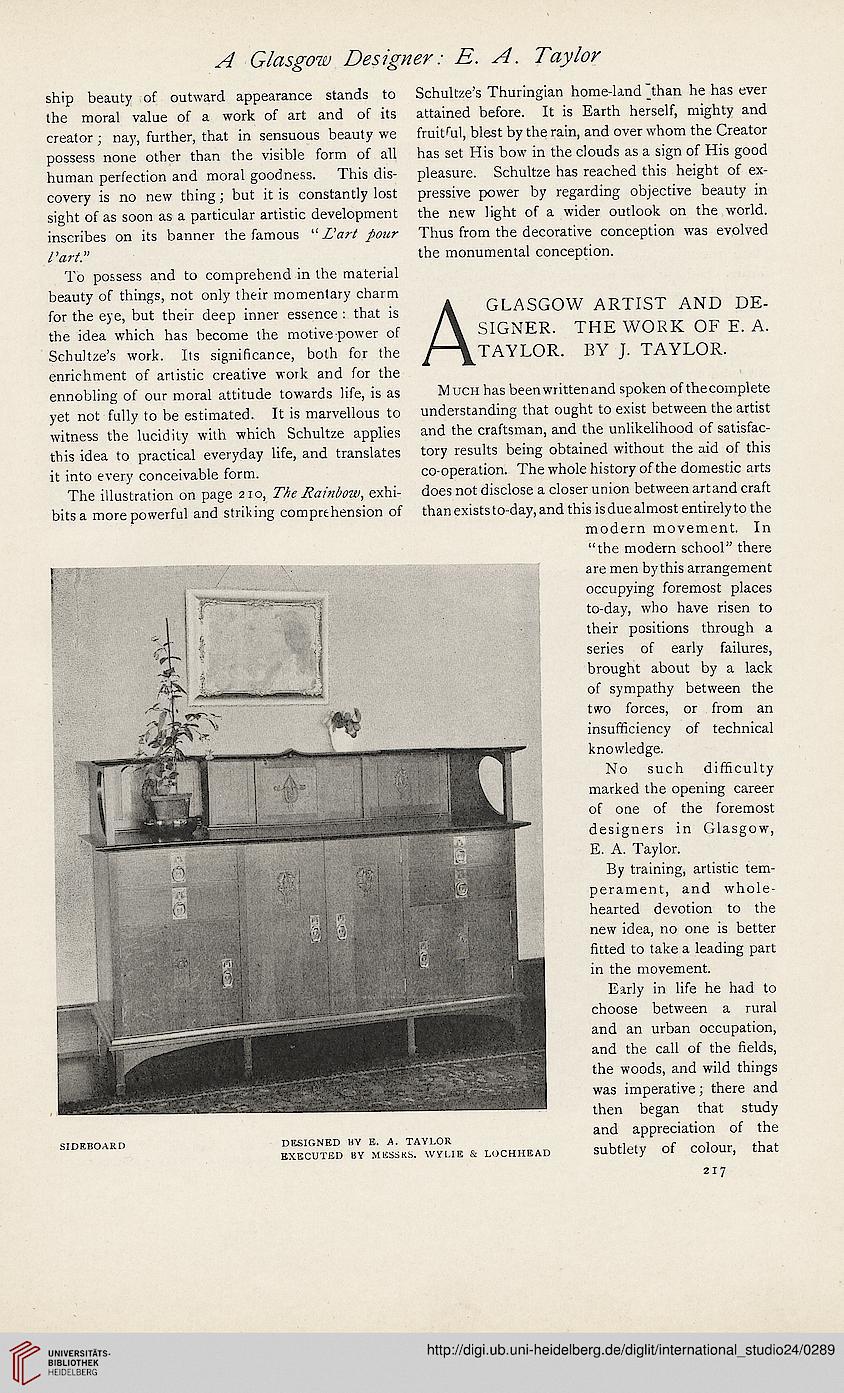 ship beauty of outward appearance stands to
the moral value of a work of art and of its
creator; nay, further, that in sensuous beauty we
possess none other than the visible form of all
human perfection and moral goodness. This dis-
covery is no new thing; but it is constantly lost
sight of as soon as a particular artistic development
inscribes on its banner the famous “ L'art pour
l'art.”
To possess and to comprehend in the material
beauty of things, not only their momentary charm
for the eye, but their deep inner essence : that is
the idea which has become the motive power of
Schultze’s work. Its significance, both for the
enrichment of artistic creative work and for the
ennobling of our moral attitude towards life, is as
yet not fully to be estimated. It is marvellous to
witness the lucidity with which Schultze applies
this idea to practical everyday life, and translates
it into every conceivable form.
The illustration on page 210, The Rainbow, exhi-
bits a more powerful and striking comprehension of

Schultze’s Thuringian home-land 'than he has ever
attained before. It is Earth herself, mighty and
fruitful, blest by the rain, and over whom the Creator
has set His bowT in the clouds as a sign of His good
pleasure. Schultze has reached this height of ex-
pressive power by regarding objective beauty in
the new light of a wider outlook on the world.
Thus from the decorative conception was evolved
the monumental conception.
A GLASGOW ARTIST AND DE-
SIGNER. THE WORK OF E. A.
TAYLOR. BY J. TAYLOR.
Much has been written and spoken of the complete
understanding that ought to exist between the artist
and the craftsman, and the unlikelihood of satisfac-
tory results being obtained without the aid of this
co-operation. The whole history of the domestic arts
does not disclose a closer union between artand craft
than existsto-day, and this isduealmost entirelyto the
modern movement. In
“the modern school” there
are men by this arrangement
occupying foremost places
to-day, who have risen to
their positions through a
series of early failures,
brought about by a lack
of sympathy between the
two forces, or from an
insufficiency of technical
knowledge.
No such difficulty
marked the opening career
of one of the foremost
designers in Glasgow,
E. A. Taylor.
By training, artistic tem-
perament, and whole-
hearted devotion to the
new idea, no one is better
fitted to take a leading part
in the movement.
Early in life he had to
choose between a rural
and an urban occupation,
and the call of the fields,
the woods, and wild things
was imperative; there and
then began that study
and appreciation of the
subtlety of colour, that
217