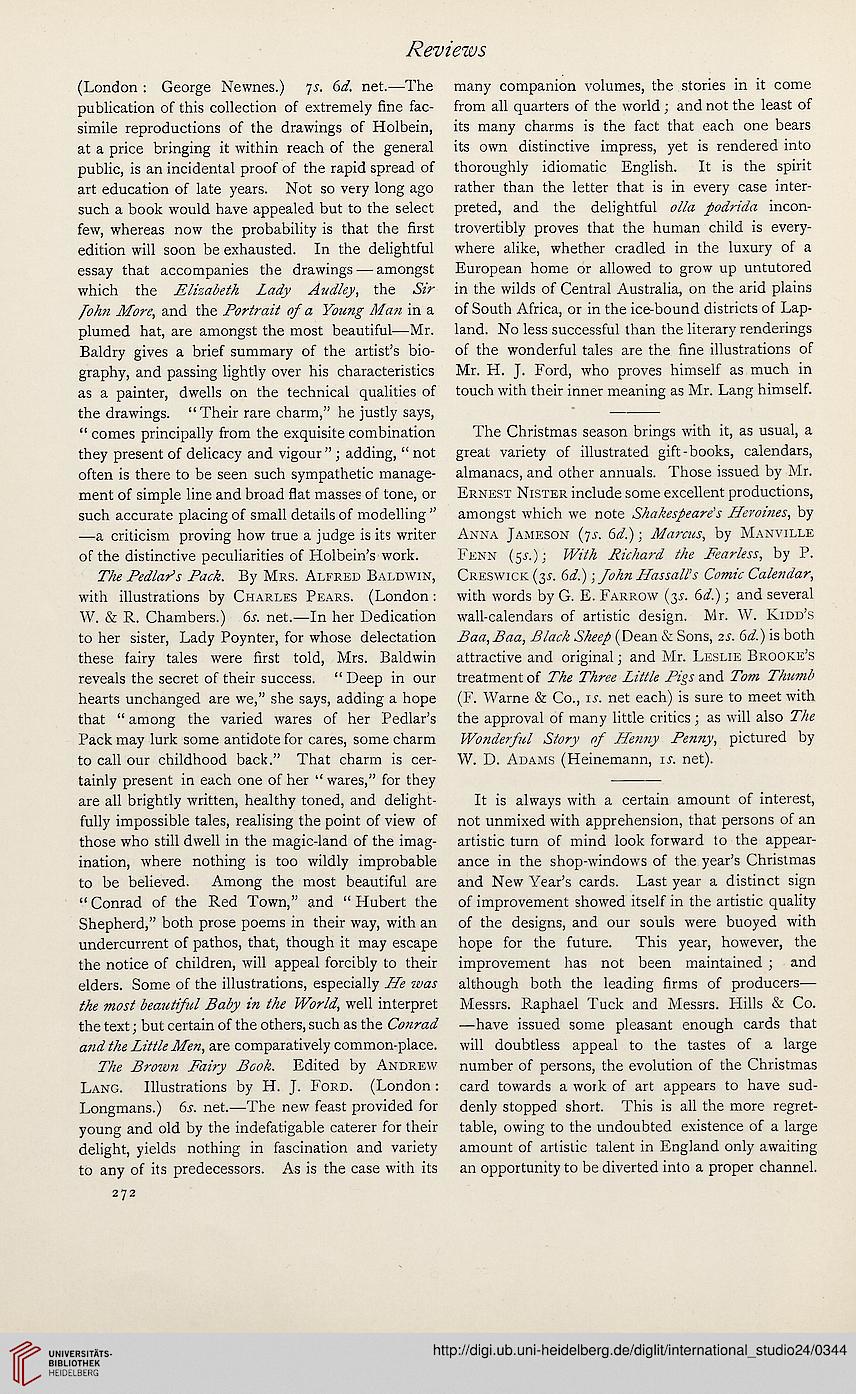 (London : George Newnes.) ~js. 6d. net.—The
publication of this collection of extremely fine fac-
simile reproductions of the drawings of Holbein,
at a price bringing it within reach of the general
public, is an incidental proof of the rapid spread of
art education of late years. Not so very long ago
such a book would have appealed but to the select
few, whereas now the probability is that the first
edition will soon be exhausted. In the delightful
essay that accompanies the drawings — amongst
which the Elizabeth Lady Audley, the Sir
[ohn More, and the Portrait of a Young Man in a
plumed hat, are amongst the most beautiful—Mr.
Baldry gives a brief summary of the artist’s bio-
graphy, and passing lightly over his characteristics
as a painter, dwells on the technical qualities of
the drawings. “Their rare charm,” he justly says,
“ comes principally from the exquisite combination
they present of delicacy and vigour ”; adding, “ not
often is there to be seen such sympathetic manage-
ment of simple line and broad flat masses of tone, or
such accurate placing of small details of modelling ”
—a criticism proving how true a judge is its writer
of the distinctive peculiarities of Holbein’s work.
The Pedlar’s Pack. By Mrs. Alfred Baldwin,
with illustrations by Charles Pears. (London:
W. & R. Chambers.) 6s. net.—In her Dedication
to her sister, Lady Poynter, for whose delectation
these fairy tales were first told, Mrs. Baldwin
reveals the secret of their success. “ Deep in our
hearts unchanged are we,” she says, adding a hope
that “ among the varied wares of her Pedlar’s
Pack may lurk some antidote for cares, some charm
to call our childhood back.” That charm is cer-
tainly present in each one of her “ wares,” for they
are all brightly written, healthy toned, and delight-
fully impossible tales, realising the point of view of
those who still dwell in the magic-land of the imag-
ination, where nothing is too wildly improbable
to be believed. Among the most beautiful are
“ Conrad of the Red Town,” and “ Hubert the
Shepherd,” both prose poems in their way, with an
undercurrent of pathos, that, though it may escape
the notice of children, will appeal forcibly to their
elders. Some of the illustrations, especially He svas
the most beautiful Baby in the World, well interpret
the text; but certain of the others, such as the Conrad
and the Little Men, are comparatively common-place.
The Brown Fairy Book. Edited by Andrew
Lang. Illustrations by H. J. Ford. (London:
Longmans.) 6s. net.—The new feast provided for
young and old by the indefatigable caterer for their
delight, yields nothing in fascination and variety
to any of its predecessors. As is the case with its
272

many companion volumes, the stories in it come
from all quarters of the world ; and not the least of
its many charms is the fact that each one bears
its own distinctive impress, yet is rendered into
thoroughly idiomatic English. It is the spirit
rather than the letter that is in every case inter-
preted, and the delightful olla fodrida incon-
trovertibly proves that the human child is every-
where alike, whether cradled in the luxury of a
European home or allowed to grow up untutored
in the wilds of Central Australia, on the arid plains
of South Africa, or in the ice-bound districts of Lap-
land. No less successful than the literary renderings
of the wonderful tales are the fine illustrations of
Mr. H. J. Ford, who proves himself as much in
touch with their inner meaning as Mr. Lang himself.
The Christmas season brings with it, as usual, a
great variety of illustrated gift-books, calendars,
almanacs, and other annuals. Those issued by Mr.
Ernest Nister include some excellent productions,
amongst which we note Shakespeare's Heroines, by
Anna Jameson (7s. 6d.); Marcus, by Manville
Fenn (5s.); With Richard the Fearless, by P.
Creswick (3s. 6d.); fohn Hassall’s Comic Calendar,
with words by G. E. Farrow (35. 6d.); and several
wall-calendars of artistic design. Mr. W. Kidd’s
Baa, Baa, Black Sheep (Dean & Sons, 2s. 6d.) is both
attractive and original; and Mr. Leslie Brooke’s
treatment of The Three Little Pigs and Tom Thumb
(F. Warne & Co., is. net each) is sure to meet with
the approval of many little critics ; as will also The
Wonderful Story of Henny Penny, pictured by
W. D. Adams (Heinemann, is. net).

It is always with a certain amount of interest,
not unmixed with apprehension, that persons of an
artistic turn of mind look forward to the appear-
ance in the shop-windows of the year’s Christmas
and New Year’s cards. Last year a distinct sign
of improvement showed itself in the artistic quality
of the designs, and our souls were buoyed with
hope for the future. This year, however, the
improvement has not been maintained ; and
although both the leading firms of producers-—
Messrs. Raphael Tuck and Messrs. Hills & Co.
—have issued some pleasant enough cards that
will doubtless appeal to the tastes of a large
number of persons, the evolution of the Christmas
card towards a work of art appears to have sud-
denly stopped short. This is all the more regret-
table, owing to the undoubted existence of a large
amount of artistic talent in England only awaiting
an opportunity to be diverted into a proper channel.