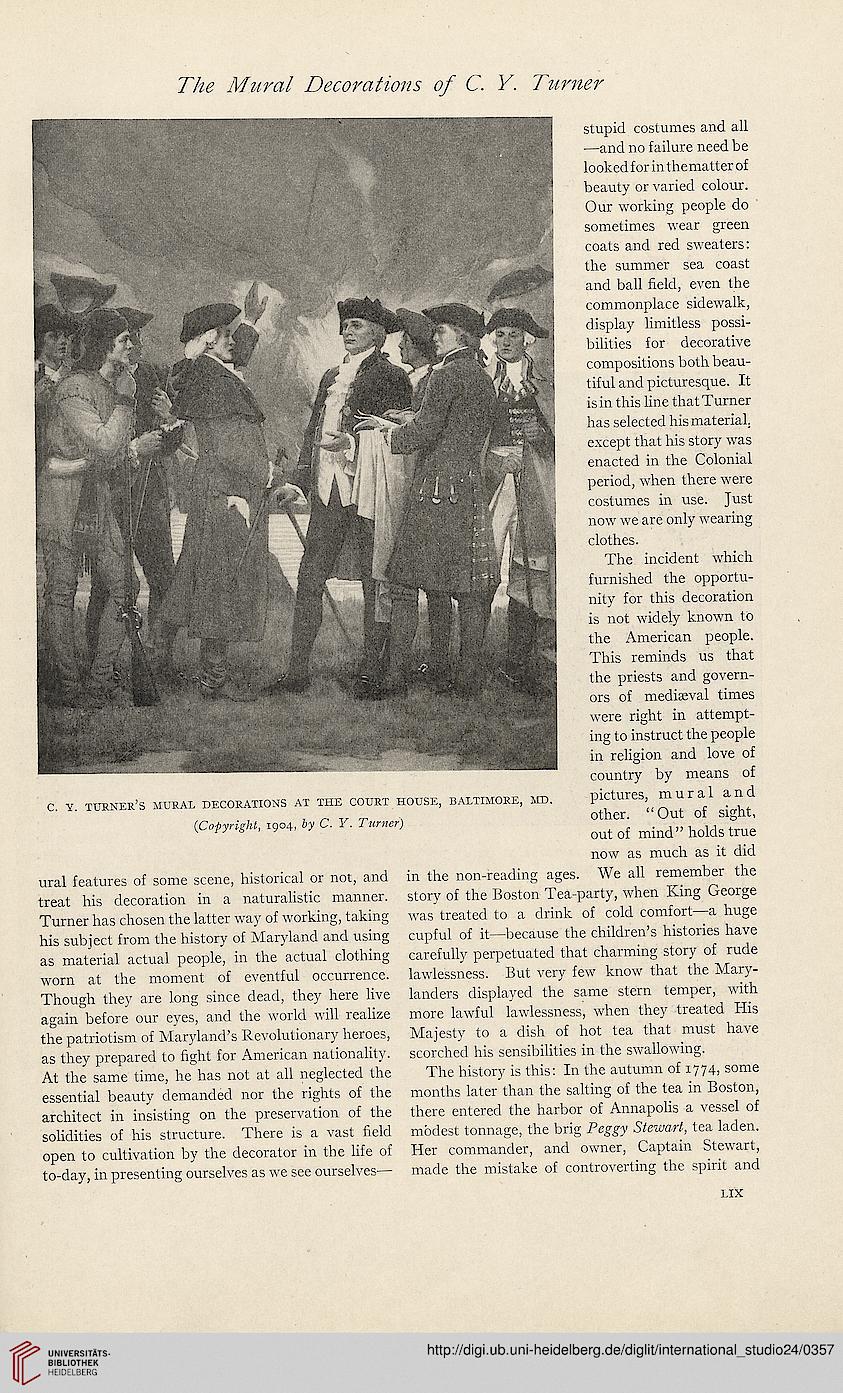 ural features of some scene, historical or not, and
treat his decoration in a naturalistic manner.
Turner has chosen the latter way of working, taking
his subject from the history of Maryland and using
as material actual people, in the actual clothing
worn at the moment of eventful occurrence.
Though they are long since dead, they here live
again before our eyes, and the world will realize
the patriotism of Maryland’s Revolutionary heroes,
as they prepared to fight for American nationality.
At the same time, he has not at all neglected the
essential beauty demanded nor the rights of the
architect in insisting on the preservation of the
solidities of his structure. There is a vast field
open to cultivation by the decorator in the life of
to-day, in presenting ourselves as we see ourselves—

stupid costumes and all
—and no failure need be
looked for in the matter of
beauty or varied colour.
Our working people do
sometimes wear green
coats and red sweaters:
the summer sea coast
and ball field, even the
commonplace sidewalk,
display limitless possi-
bilities for decorative
compositions both beau-
tiful and picturesque. It
is in this line that Turner
has selected his material,
except that his story was
enacted in the Colonial
period, when there were
costumes in use. Just
now we are only wearing
clothes.
The incident which
furnished the opportu-
nity for this decoration
is not widely known to
the American people.
This reminds us that
the priests and govern-
ors of mediaeval times
were right in attempt-
ing to instruct the people
in religion and love of
country by means of
pictures, mural and
other. “Out of sight,
out of mind ” holds true
now as much as it did
in the non-reading ages. We all remember the
story of the Boston Tea-party, when King George
was treated to a drink of cold comfort—a huge
cupful of it—because the children’s histories have
carefully perpetuated that charming story of rude
lawlessness. But very few know that the Mary-
landers displayed the same stern temper, with
more lawful lawlessness, when they treated His
Majesty to a dish of hot tea that must have
scorched his sensibilities in the swallowing.
The history is this: In the autumn of 1774, some
months later than the salting of the tea in Boston,
there entered the harbor of Annapolis a vessel of
modest tonnage, the brig Peggy Stewart, tea laden.
Her commander, and owner, Captain Stewart,
made the mistake of controverting the spirit and