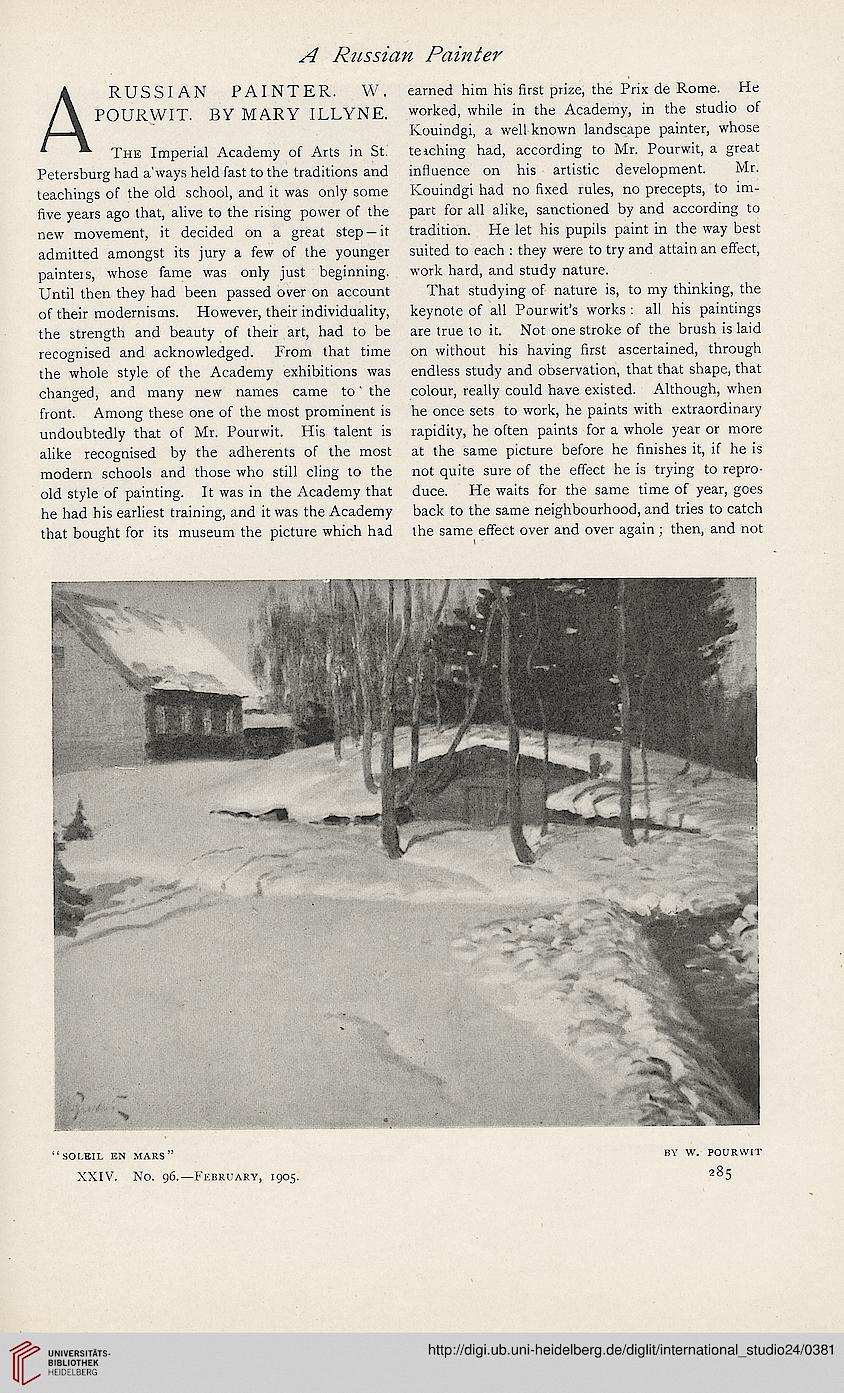 A RUSSIAN PAINTER. W.
POURWIT. BY MARY ILLYNE.
The Imperial Academy of Arts in St.
Petersburg had a'ways held fast to the traditions and
teachings of the old school, and it was only some
five years ago that, alive to the rising power of the
new movement, it decided on a great step —it
admitted amongst its jury a few of the younger
painteis, whose fame was only just beginning.
Until then they had been passed over on account
of their modernisms. However, their individuality,
the strength and beauty of their art, had to be
recognised and acknowledged. From that time
the whole style of the Academy exhibitions was
changed, and many new names came to the
front. Among these one of the most prominent is
undoubtedly that of Mr. Pourwit. His talent is
alike recognised by the adherents of the most
modern schools and those who still cling to the
old style of painting. It was in the Academy that
he had his earliest training, and it was the Academy
that bought for its museum the picture which had

earned him his first prize, the Prix de Rome. He
worked, while in the Academy, in the studio of
Kouindgi, a well known landscape painter, whose
teaching had, according to Mr. Pourwit, a great
influence on his artistic development. Mr.
Kouindgi had no fixed rules, no precepts, to im-
part for all alike, sanctioned by and according to
tradition. He let his pupils paint in the way best
suited to each : they were to try and attain an effect,
work hard, and study nature.
That studying of nature is, to my thinking, the
keynote of all Pourwit’s works : all his paintings
are true to it. Not one stroke of the brush is laid
on without his having first ascertained, through
endless study and observation, that that shape, that
colour, really could have existed. Although, when
he once sets to work, he paints with extraordinary
rapidity, he often paints for a whole year or more
at the same picture before he finishes it, if he is
not quite sure of the effect he is trying to repro-
duce. He waits for the same time of year, goes
back to the same neighbourhood, and tries to catch
the same effect over and over again ; then, and not