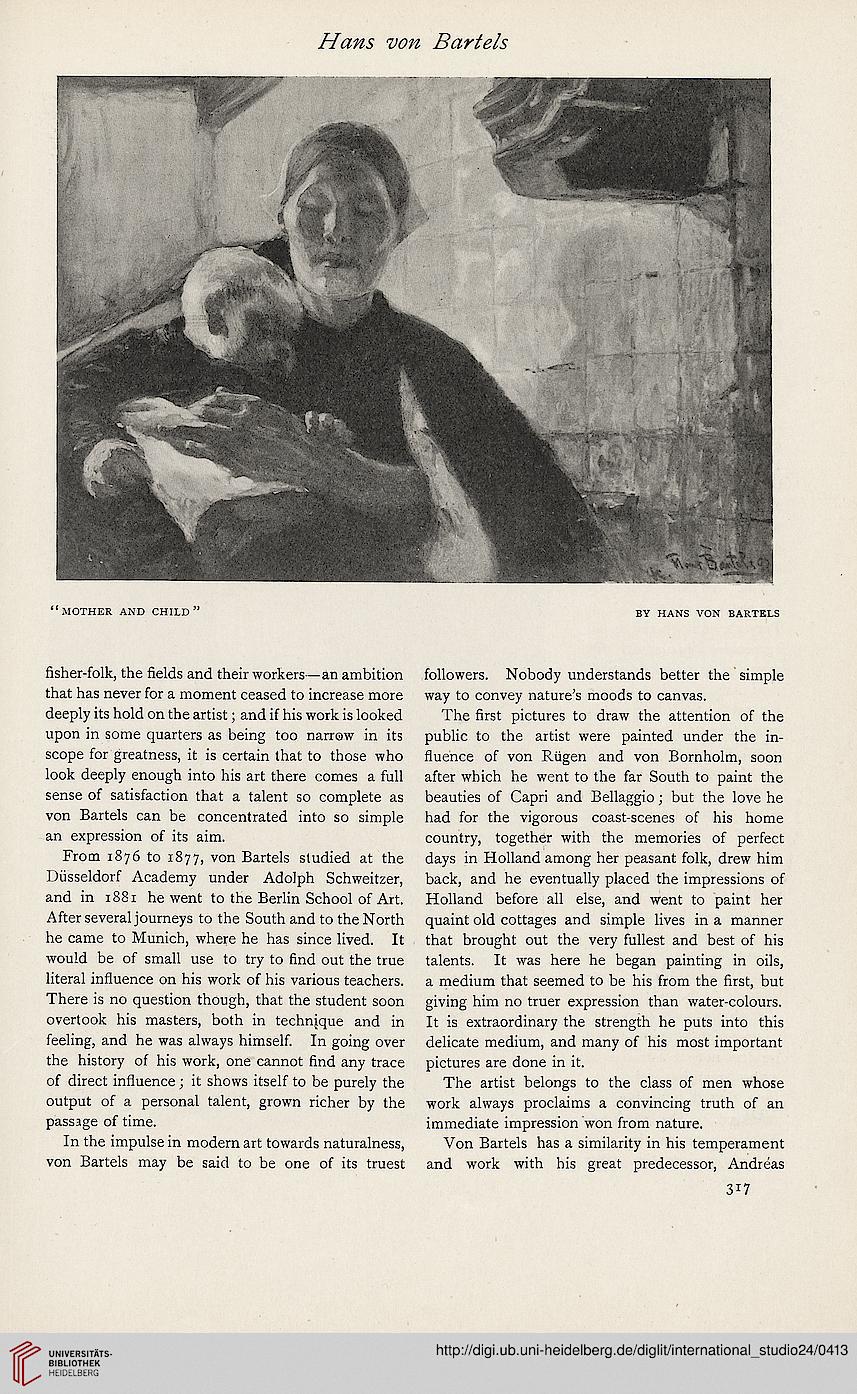 fisher-folk, the fields and their workers—an ambition
that has never for a moment ceased to increase more
deeply its hold on the artist; and if his work is looked
upon in some quarters as being too narrow in its
scope for greatness, it is certain that to those who
look deeply enough into his art there comes a full
sense of satisfaction that a talent so complete as
von Bartels can be concentrated into so simple
an expression of its aim.
From 1876 to 1877, von Bartels studied at the
Diisseldorf Academy under Adolph Schweitzer,
and in 1881 he went to the Berlin School of Art.
After several journeys to the South and to the North
he came to Munich, where he has since lived. It
would be of small use to try to find out the true
literal influence on his work of his various teachers.
There is no question though, that the student soon
overtook his masters, both in technique and in
feeling, and he was always himself. In going over
the history of his work, one cannot find any trace
of direct influence; it shows itself to be purely the
output of a personal talent, grown richer by the
passage of time.
In the impulse in modern art towards naturalness,
von Bartels may be said to be one of its truest

followers. Nobody understands better the simple
way to convey nature’s moods to canvas.
The first pictures to draw the attention of the
public to the artist were painted under the in-
fluence of von Rtigen and von Bornholm, soon
after which he went to the far South to paint the
beauties of Capri and Bellaggio; but the love he
had for the vigorous coast-scenes of his home
country, together with the memories of perfect
days in Holland among her peasant folk, drew him
back, and he eventually placed the impressions of
Holland before all else, and went to paint her
quaint old cottages and simple lives in a manner
that brought out the very fullest and best of his
talents. It was here he began painting in oils,
a medium that seemed to be his from the first, but
giving him no truer expression than water-colours.
It is extraordinary the strength he puts into this
delicate medium, and many of his most important
pictures are done in it.
The artist belongs to the class of men whose
work always proclaims a convincing truth of an
immediate impression won from nature.
Von Bartels has a similarity in his temperament
and work with his great predecessor, Andreas
3i7