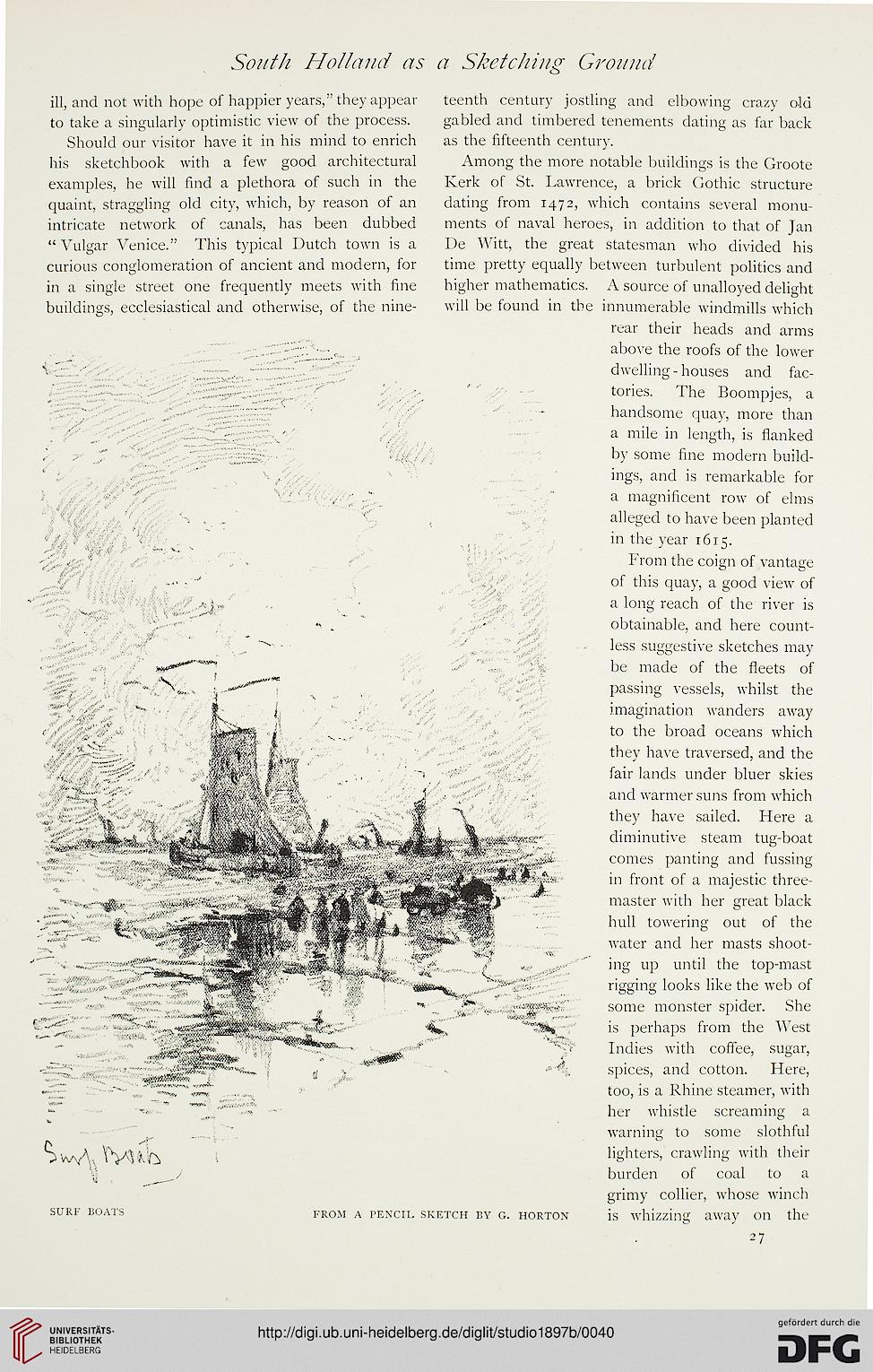 Information about OCR text
South Holland as a Sketching Ground

ill, and not with hope of happier years," they appear teenth century jostling and elbowing crazy old
to take a singularly optimistic view of the process. gabled and timbered tenements dating as far back

Should our visitor have it in his mind to enrich as the fifteenth century,
his sketchbook with a few good architectural Among the more notable buildings is the Groote
examples, he will find a plethora of such in the Kerk of St. Lawrence, a brick Gothic structure
quaint, straggling old city, which, by reason of an dating from 1472, which contains several monu-
intricate network of canals, has been dubbed merits of naval heroes, in addition to that of Jan
" Vulgar Venice." This typical Dutch town is a De Witt, the great statesman who divided his
curious conglomeration of ancient and modern, for time pretty equally between turbulent politics and
in a single street one frequently meets with fine higher mathematics. A source of unalloyed delight
buildings, ecclesiastical and otherwise, of the nine- will be found in the innumerable windmills which

dwelling - houses and fac-
tories. The Boompjes, a
handsome quay, more than
a mile in length, is flanked
by some fine modern build-
ings, and is remarkable for
a magnificent row of elms
S . v: , "*{ ' alleged to have been planted

From the coign of vantage

less suggestive sketches may
' be made of the fleets of

j passing vessels, whilst the

'J\ to the broad oceans which

they have traversed, and the

MirM. • i" v and warmer suns from which

they have sailed. Here a
diminutive steam tug-boat
comes panting and fussing
in front of a majestic three-
master with her great black
hull towering out of the
water and her masts shoot-
ing up until the top-mast
rigging looks like the web of
some monster spider. She

r* ^ ' her whistle screaming a

warning to some slothful

y burden of coal to a

SURF BOATS FROM A PENCIL SKETCH BY G. HORTON IS whizzing away Oil the