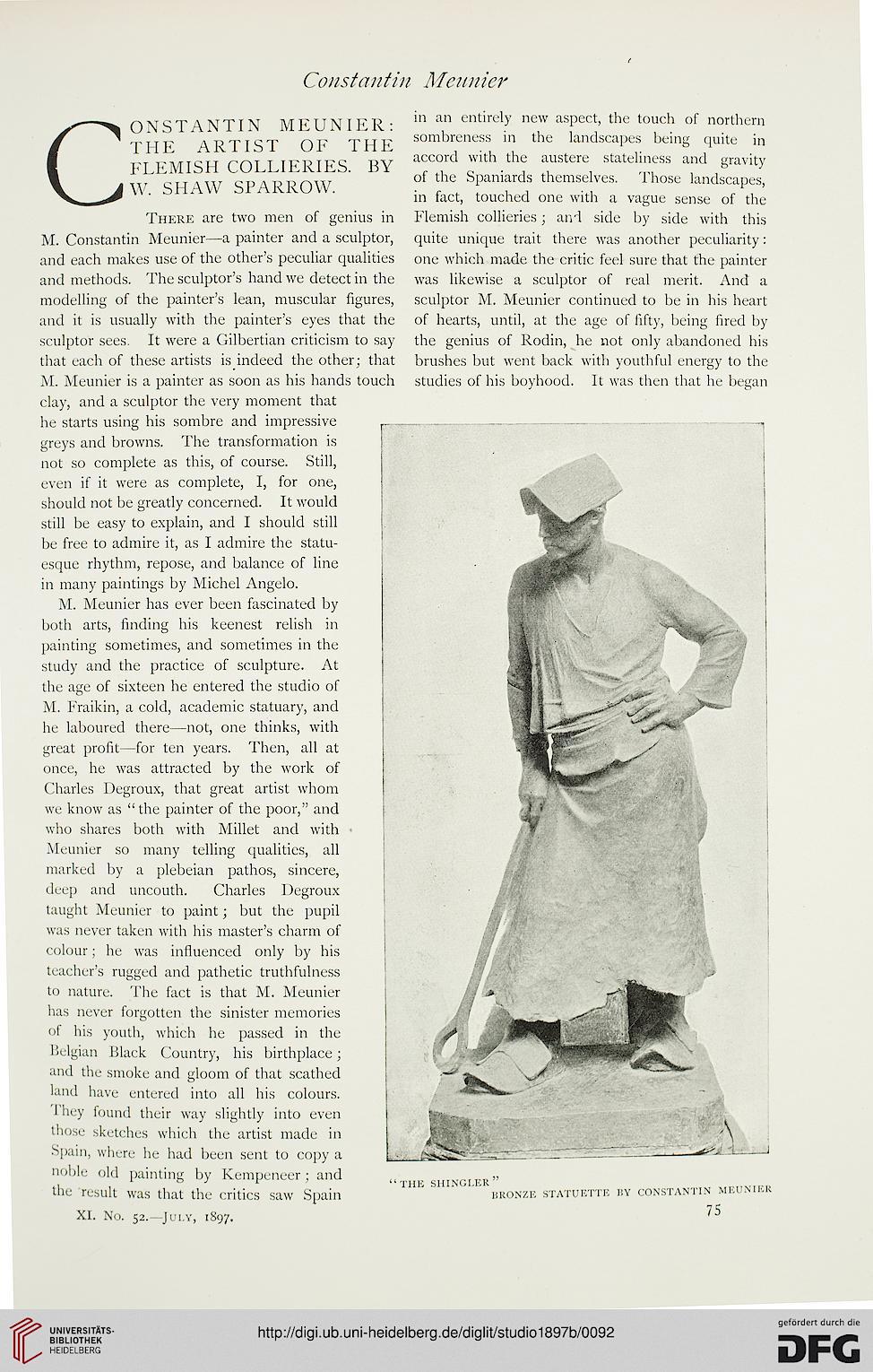 ONSTANTIN MEUNIER- in an cntircl>' new asPect> tnL> touch of northern
THE ARTIST OF THE sombrencss m thc landscapes being quite in
FLEMISH COLLIERIES. BY accord with_the austere stateless and gravity
•vj CUAm cl)APDnw of the Spaniards themselves. 1 hose landscapes,

in tact, touched one with a vague sense of the
There are two men of genius in Flemish collieries; and side by side with this
M. Constantin Meunier—a painter and a sculptor, quite unique trait there was another peculiarity:
and each makes use of the other's peculiar qualities one which made the critic feel sure that the painter
and methods. The sculptor's hand we detect in the was likewise a sculptor of real merit. And a
modelling of the painter's lean, muscular figures, sculptor M. Meunier continued to be in his heart
and it is usually with the painter's eyes that the of hearts, until, at the age of fifty, being fired by
sculptor sees. It were a Gilbertian criticism to say the genius of Rodin, he not only abandoned his
that each of these artists is indeed the other; that brushes but went back with youthful energy to the
M. Meunier is a painter as soon as his hands touch studies of his boyhood. It was then that he began
clay, and a sculptor the very moment that
he starts using his sombre and impressive
greys and browns. The transformation is
not so complete as this, of course. Still,
even if it were as complete, I, for one,
should not be greatly concerned. It would
still be easy to explain, and I should still
be free to admire it, as I admire the statu-
esque rhythm, repose, and balance of line
in many paintings by Michel Angelo.

M. Meunier has ever been fascinated by
both arts, finding his keenest relish in
painting sometimes, and sometimes in the
study and the practice of sculpture. At
the age of sixteen he entered the studio of
M. Fraikin, a cold, academic statuary, and
he laboured there—not, one thinks, with
great profit—for ten years. Then, all at
once, he was attracted by the work of
Charles Degroux, that great artist whom
we know as "the painter of the poor," and
who shares both with Millet and with
Meunier so many telling qualities, all
marked by a plebeian pathos, sincere,
deep and uncouth. Charles Degroux
taught Meunier to paint; but the pupil
was never taken with his master's charm of
colour; he was influenced only by his
teacher's rugged and pathetic truthfulness
to nature. The fact is that M. Meunier
has never forgotten the sinister memories
oi his youth, which he passed in the
Belgian Black Country, his birthplace;
and the smoke and gloom of that scathed
land have entered into all his colours,
rhey found their way slightly into even
those sketches which the artist made in
Spam, where he had been sent to copy a
nobK- old painting by Kempeneer ; and