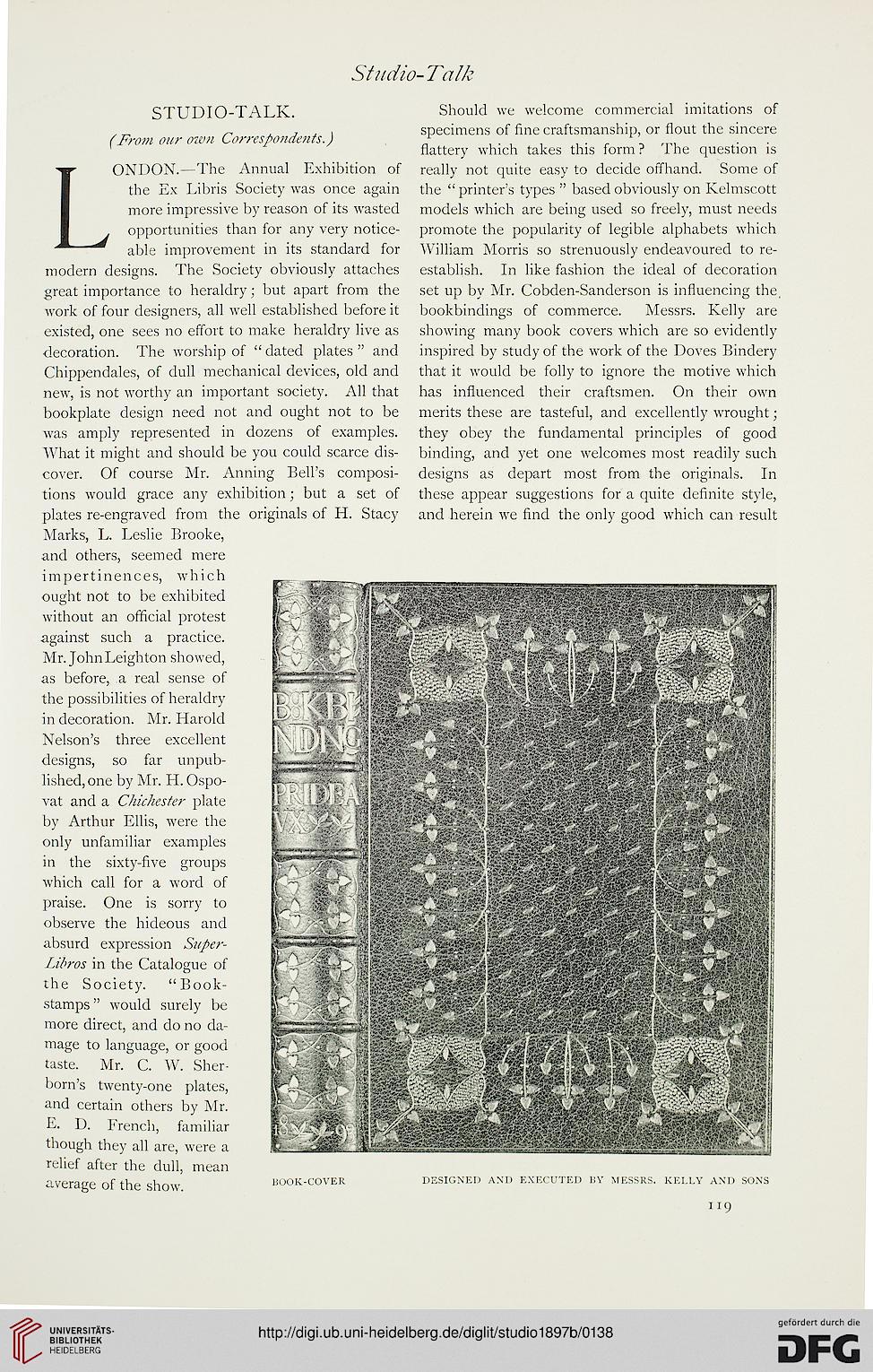 STUDIO-TALK. Should we welcome commercial imitations of

,„ „ 7,1 specimens of fine craftsmanship, or flout the sincere

1 flattery which takes this form? Ine question is

LONDON.—The Annual Exhibition of really not quite easy to decide offhand. Some of
the Ex Libris Society was once again the " printer's types " based obviously on Kelmscott
more impressive by reason of its wasted models which are being used so freely, must needs
opportunities than for any very notice- promote the popularity of legible alphabets which
able improvement in its standard for William Morris so strenuously endeavoured to re-
modern designs. The Society obviously attaches establish. In like fashion the ideal of decoration
great importance to heraldry; but apart from the set up by Mr. Cobden-Sanderson is influencing the,
work of four designers, all well established before it bookbindings of commerce. Messrs. Kelly are
existed, one sees no effort to make heraldry live as showing many book covers which are so evidently
decoration. The worship of "dated plates " and inspired by study of the work of the Doves Bindery
Chippendales, of dull mechanical devices, old and that it would be folly to ignore the motive which
new, is not worthy an important society. All that has influenced their craftsmen. On their own
bookplate design need not and ought not to be merits these are tasteful, and excellently wrought;
was amply represented in dozens of examples, they obey the fundamental principles of good
What it might and should be you could scarce dis- binding, and yet one welcomes most readily such
cover. Of course Mr. Anning Bell's composi- designs as depart most from the originals. In
tions would grace any exhibition; but a set of these appear suggestions for a quite definite style,
plates re-engraved from the originals of H. Stacy and herein we find the only good which can result
Marks, L. Leslie Brooke,
and others, seemed mere
impertinences, which
ought not to be exhibited
without an official protest
against such a practice.
Mr. John Leigh ton showed,
as before, a real sense of
the possibilities of heraldry
in decoration. Mr. Harold
Nelson's three excellent
designs, so far unpub-
lished, one by Mr. H. Ospo-
vat and a Chichester plate
by Arthur Ellis, were the
only unfamiliar examples
in the sixty-five groups
which call for a word of
praise. One is sorry to
observe the hideous and
absurd expression Super-
Libros in the Catalogue of
the Society. "Book-
stamps" would surely be
more direct, and do no da-
mage to language, or good
taste. Mr. C. W. Sher-
born's twenty-one plates,
and certain others by Mr.
E. D. French, familiar
though they all are, were a
relief after the dull, mean

average of the show book-cover designed and executed by Messrs. kelly and sons