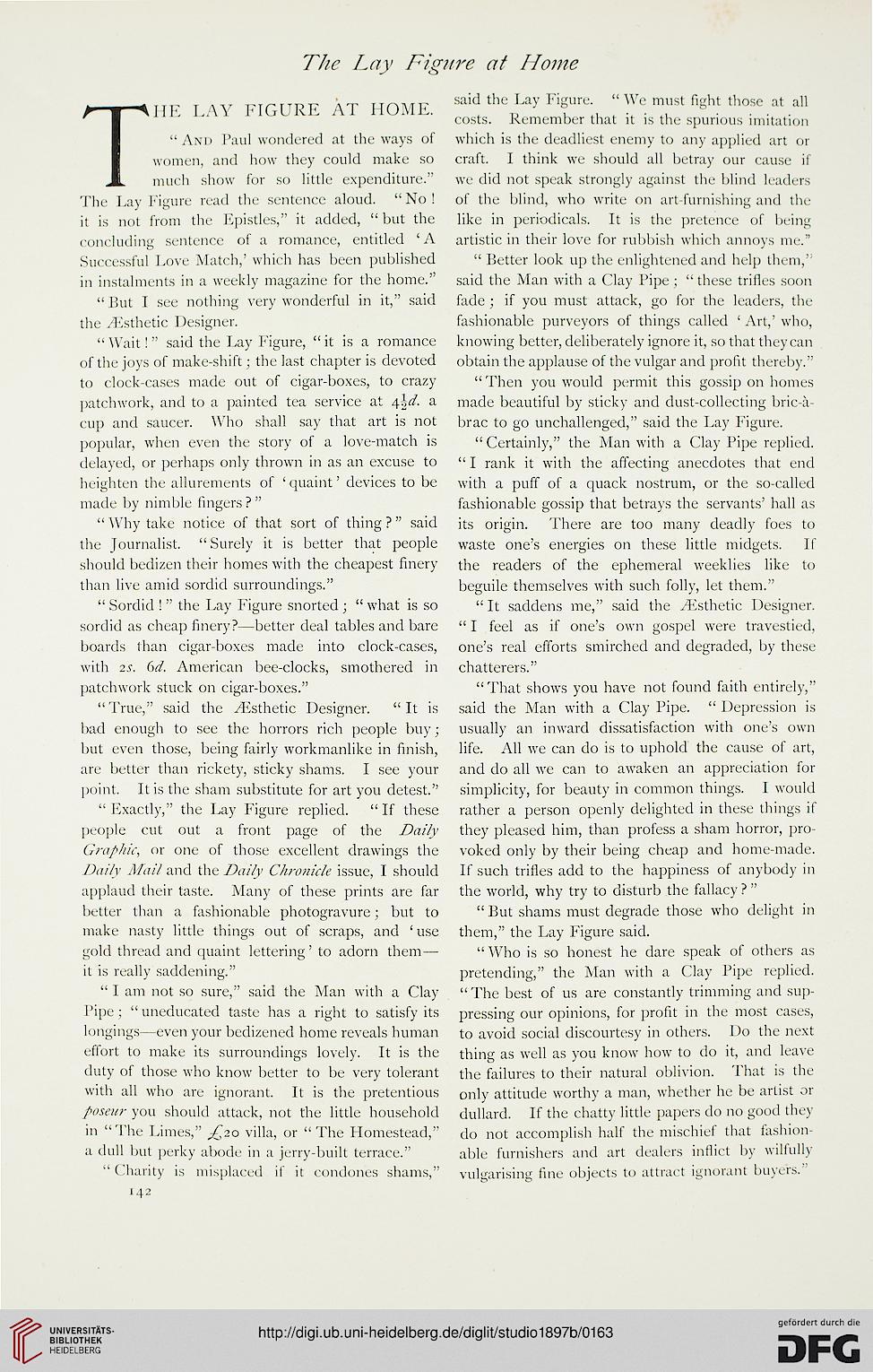 Information about OCR text
The Lav Figure at Home

HE LAY FIGURE AT HOME.

"And Paul wondered at the ways of
women, and how they could make so
much show for so little expenditure."

The Lay Figure read the sentence aloud. "No!
it is not from the Epistles," it added, "but the
concluding sentence of a romance, entitled 'A
Successful Love Match,' which has been published
in instalments in a weekly magazine for the home."

" But I see nothing very wonderful in it," said
the /Esthetic Designer.

"Wait!" said the Lay Figure, "it is a romance
of the joys of make-shift; the last chapter is devoted
to ( lock-cases made out of cigar-boxes, to crazy
patchwork, and to a painted tea service at <\\d. a
cup and saucer. Who shall say that art is not
popular, when even the story of a love-match is
delayed, or perhaps only thrown in as an excuse to
heighten the allurements of 'quaint' devices to be
made by nimble fingers ? "

" Why take notice of that sort of thing ? " said
the Journalist. " Surely it is better that people
should bedizen their homes with the cheapest finery
than live amid sordid surroundings."

" Sordid ! " the Lay Figure snorted ; " what is so
sordid as cheap finery?—better deal tables and bare
boards than cigar-boxes made into clock-cases,
with 2S. 6d. American bee-clocks, smothered in
patchwork stuck on cigar-boxes."

"True," said the /Esthetic Designer. "It is
bad enough to see the horrors rich people buy;
but even those, being fairly workmanlike in finish,
are better than rickety, sticky shams. I see your
point. It is the sham substitute for art you detest."

" Exactly," the Lay Figure replied. " If these
people cut out a front page of the Daily
Graphic, or one of those excellent drawings the
Daily Mail and the Daily Chi-onicle issue, I should
applaud their taste. Many of these prints are far
better than a fashionable photogravure; but to
make nasty little things out of scraps, and 'use
gold thread and quaint lettering' to adorn them—
it is really saddening."

" I am not so sure," said the Man with a Clay
Pipe; "uneducated taste has a right to satisfy its
longings—even your bedizened home reveals human
effort to make its surroundings lovely. It is the
duty of those who know better to be very tolerant
with all who are ignorant. It is the pretentious
poseur you should attack, not the little household
in "The Limes," £20 villa, or "The Homestead,"
a dull but perky abode in a jerry-built terrace."
"Charity is misplaced if it condones shams,"
142

said the Lay Figure. " We must fight those at all
costs. Remember that it is the spurious imitation
which is the deadliest enemy to any applied art 01
craft. I think we should all betray our cause if
we did not speak strongly against the blind leaders
of the blind, who write on art furnishing and the
like in periodicals. It is the pretence of being
artistic in their love for rubbish which annoys me."

" Better look up the enlightened and help them,5
said the Man with a Clay Pipe ; "these trifles soon
fade ; if you must attack, go for the leaders, the
fashionable purveyors of things called 'Art,1 who,
knowing better, deliberately ignore it, so that they can
obtain the applause of the vulgar and profit thereby."

"Then you would permit this gossip on homes
made beautiful by sticky and dust-collecting bric-a-
brac to go unchallenged," said the Lay Figure.

" Certainly," the Man with a Clay Pipe replied.
" I rank it with the affecting anecdotes that end
with a puff of a quack nostrum, or the so-called
fashionable gossip that betrays the servants' hall as
its origin. There are too many deadly foes to
waste one's energies on these little midgets. If
the readers of the ephemeral weeklies like to
beguile themselves with such folly, let them."

"It saddens me," said the ./Esthetic Designer
" I feel as if one's own gospel were travestied,
one's real efforts smirched and degraded, by these
chatterers."

"That shows you have not found faith entirely,"
said the Man wTith a Clay Pipe. " Depression is
usually an inward dissatisfaction with one's own
life. All we can do is to uphold the cause of art,
and do all we can to awaken an appreciation for
simplicity, for beauty in common things. I would
rather a person openly delighted in these things if
they pleased him, than profess a sham horror, pro-
voked only by their being cheap and home-made.
If such trifles add to the happiness of anybody in
the wrorld, why try to disturb the fallacy ? "

"But shams must degrade those who delight in
them," the Lay Figure said.

" Who is so honest he dare speak of others as
pretending," the Man with a Clay Pipe replied.
"The best of us are constantly trimming and sup-
pressing our opinions, for profit in the most cases,
to avoid social discourtesy in others. Do the next
thing as well as you know how to do it, and leave
the failures to their natural oblivion. That is the
only attitude worthy a man, whether he be artist or
dullard. If the chatty little papers do no good they
do not accomplish half the mischief that fashion
able furnishers and art dealers inflict by wilfully
vulgarising fine objects to attract ignorant buyers.