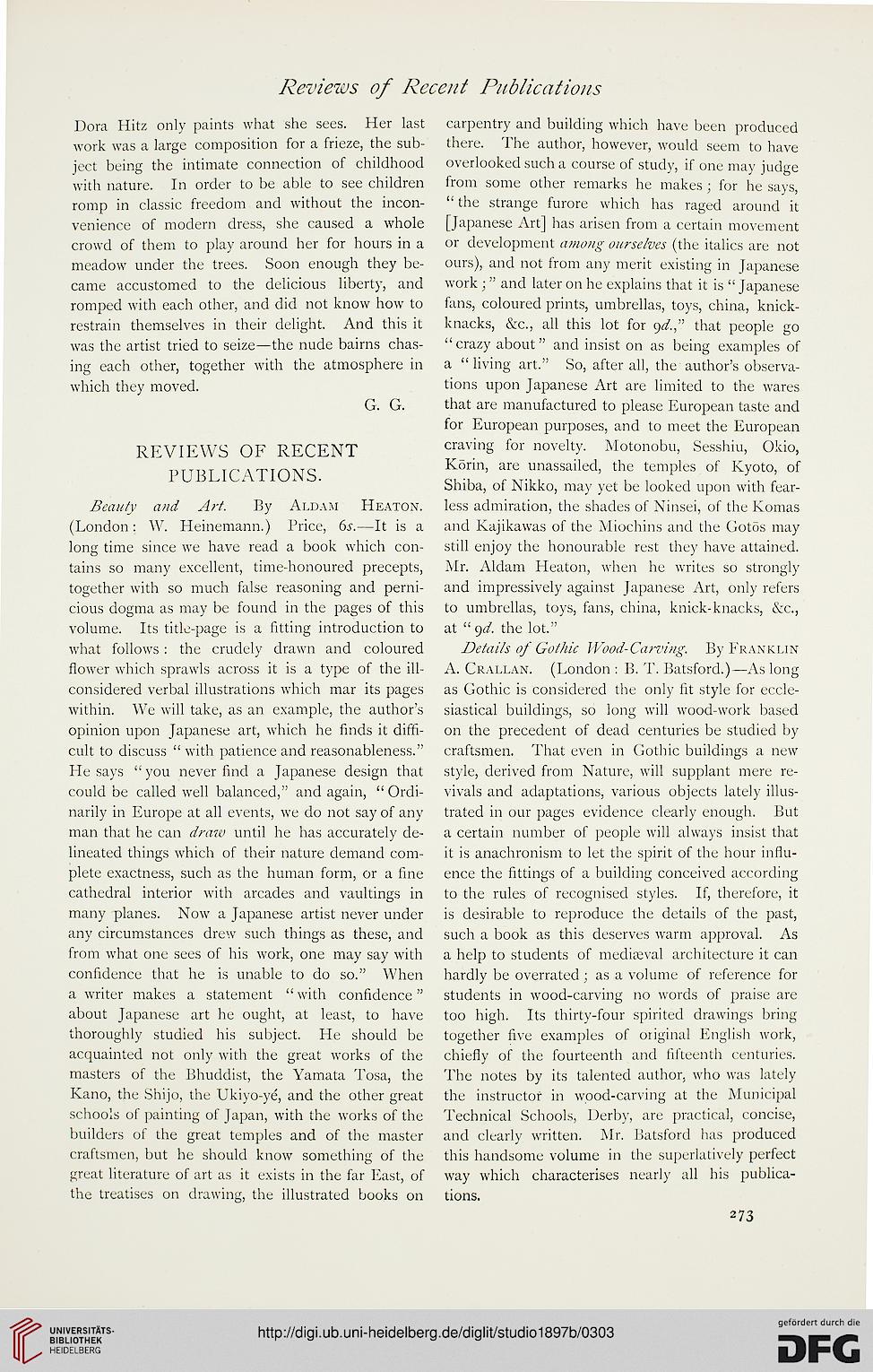 Dora Hitz only paints what she sees. Her last
work was a large eomposition for a frieze, the sub-
ject being the intimate connection of childhood
with nature. In order to be able to see children
romp in classic freedom and without the incon-
venience of modern dress, she caused a whole
crowd of them to play around her for hours in a
meadow under the trees. Soon enough they be-
came accustomed to the delicious liberty, and
romped with each other, and did not know how to
restrain themselves in their delight. And this it
was the artist tried to seize—the nude bairns chas-
ing each other, together with the atmosphere in
which they moved.

Beauty and Art. By Aldam Heaton.
(London: W. Heinemann.) Price, 6s.—It is a
long time since we have read a book which con-
tains so many excellent, time-honoured precepts,
together with so much false reasoning and perni-
cious dogma as may be found in the pages of this
volume. Its title-page is a fitting introduction to
what follows : the crudely drawn and coloured
flower which sprawls across it is a type of the ill-
considered verbal illustrations which mar its pages
within. We will take, as an example, the author's
opinion upon Japanese art, which he finds it diffi-
cult to discuss " with patience and reasonableness."
He says "you never find a Japanese design that
could be called well balanced," and again, " Ordi-
narily in Europe at all events, we do not say of any
man that he can draw until he has accurately de-
lineated things which of their nature demand com-
plete exactness, such as the human form, or a fine
cathedral interior with arcades and vaultings in
many planes. Now a Japanese artist never under
any circumstances drew such things as these, and
from what one sees of his work, one may say with
confidence that he is unable to do so." When
a writer makes a statement " with confidence"
about Japanese art he ought, at least, to have
thoroughly studied his subject. He should be
acquainted not only with the great works of the
masters of the Bhuddist, the Yamata Tosa, the
Kano, the Shi jo, the Ukiyo-ye, and the other great
schools of painting of Japan, with the works of the
builders of the great temples and of the master
craftsmen, but he should know something of the
great literature of art as it exists in the far East, of
the treatises on drawing, the illustrated books on

carpentry and building which have been produced
there. The author, however, would seem to have
overlooked such a course of study, if one may judge
from some other remarks he makes ; for he says,
"the strange furore which has raged around it
[Japanese Art] has arisen from a certain movement
or development among ourselves (the italics are not
ours), and not from any merit existing in Japanese
work ; " and later on he explains that it is " Japanese
fans, coloured prints, umbrellas, toys, china, knick-
knacks, &c, all this lot for gd." that people go
"crazy about" and insist on as being examples of
a " living art." So, after all, the author's observa-
tions upon Japanese Art are limited to the wares
that are manufactured to please European taste and
for European purposes, and to meet the European
craving for novelty. Motonobu, Sesshiu, Okio,
Korin, are unassailed, the temples of Kyoto, of
Shiba, of Nikko, may yet be looked upon with fear-
less admiration, the shades of Ninsei, of the Komas
and Kajikawas of the Miochins and the Gotos may
still enjoy the honourable rest they have attained.
Mr. Aldam Heaton, when he writes so strongly
and impressively against Japanese Art, only refers
to umbrellas, toys, fans, china, knick-knacks, &c,
at " gd. the lot."

Details of Gothic Wood-Carving. By Franklin
A. Crallan. (London : B. T. Batsford.)—As long
as Gothic is considered the only fit style for eccle-
siastical buildings, so long will wood-work based
on the precedent of dead centuries be studied by
craftsmen. That even in Gothic buildings a new
style, derived from Nature, will supplant mere re-
vivals and adaptations, various objects lately illus-
trated in our pages evidence clearly enough. But
a certain number of people will always insist that
it is anachronism to let the spirit of the hour influ-
ence the fittings of a building conceived according
to the rules of recognised styles. If, therefore, it
is desirable to reproduce the details of the past,
such a book as this deserves warm approval. As
a help to students of mediaeval architecture it can
hardly be overrated; volume of reference for
students in wood-carving no words of praise are
too high. Its thirty-four spirited drawings bring
together five examples of original English work,
chiefly of the fourteenth and fifteenth centuries.
The notes by its talented author, who was lately
the instructor in wood-carving at the Municipal
Technical Schools, Derby, are practical, concise,
and clearly written. Mr. Batsford has produced
this handsome volume in the superlatively perfect
way which characterises nearly all his publica-
tions.