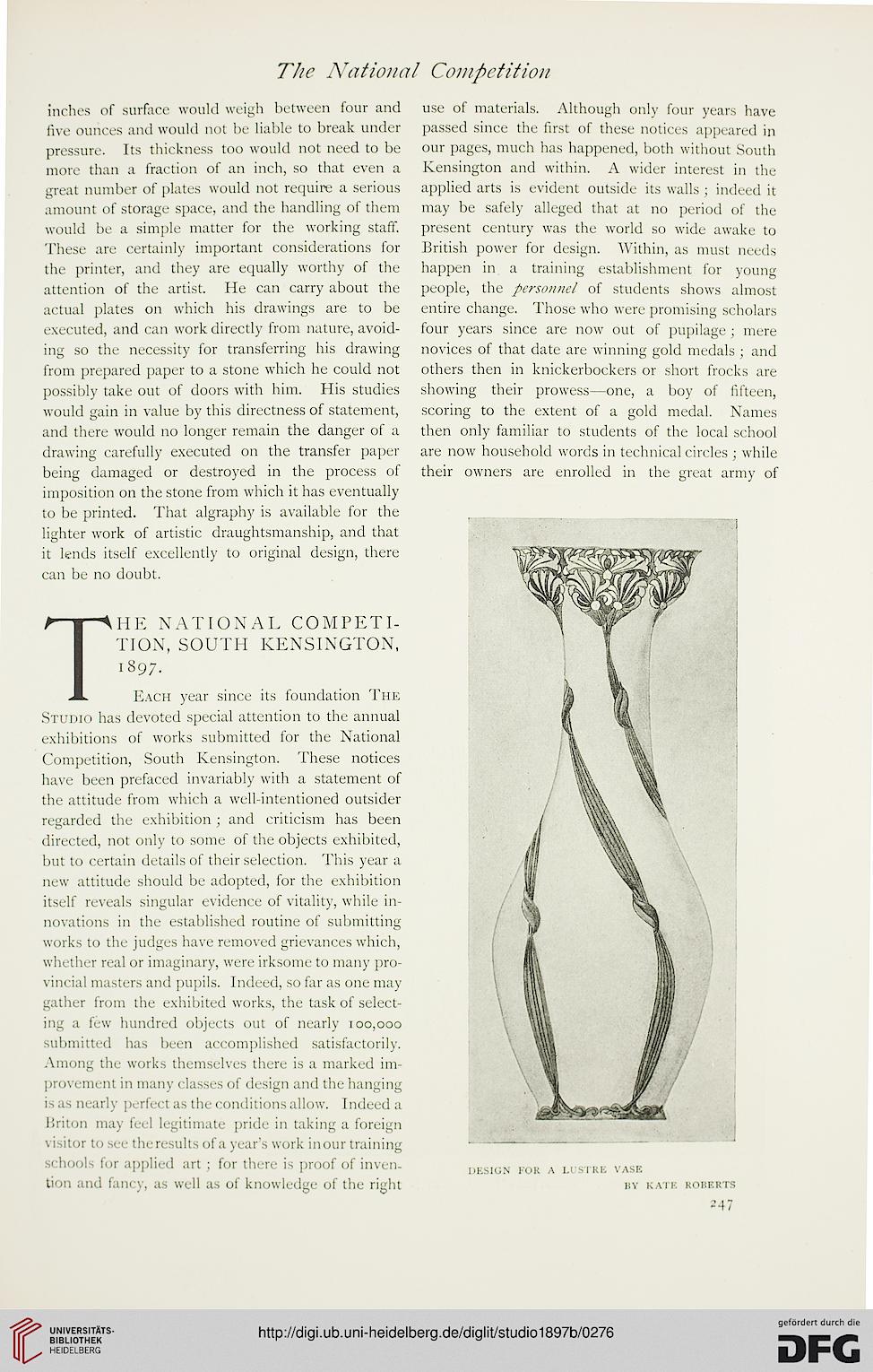 inches of surface would weigh between four and
five ounces and would not be liable to break under
pressure. Its thickness too would not need to be
more than a fraction of an inch, so that even a
great number of plates would not require a serious
amount of storage space, and the handling of them
would be a simple matter for the working staff.
These are certainly important considerations for
the printer, and they are equally worthy of the
attention of the artist. He can carry about the
actual plates on which his drawings are to be
executed, and can work directly from nature, avoid-
ing so the necessity for transferring his drawing
from prepared paper to a stone which he could not
possibly take out of doors with him. His studies
would gain in value by this directness of statement,
and there would no longer remain the danger of a
drawing carefully executed on the transfer paper
being damaged or destroyed in the process of
imposition on the stone from which it has eventually
to be printed. That algraphy is available for the
lighter work of artistic draughtsmanship, and that
it lends itself excellently to original design, there
can be no doubt.

THE NATIONAL COMPETI-
TION, SOUTH KENSINGTON,
189/.
Each year since its foundation The
STUDIO has devoted special attention to the annual
exhibitions of works submitted for the National
Competition, South Kensington. These notices
have been prefaced invariably with a statement of
the attitude from which a well-intentioned outsider
regarded the exhibition ; and criticism has been
directed, not only to some of the objects exhibited,
but to certain details of their selection. This year a
new attitude should be adopted, for the exhibition
itself reveals singular evidence of vitality, while in-
novations in the established routine of submitting
works to the judges have removed grievances which,
whether real or imaginary, were irksome to many pro-
vincial masters and pupils. Indeed, so far as one may
gather from the exhibited works, the task of select-
ing a few hundred objects out of nearly 100,000
submitted has been accomplished satisfactorily.
Among the works themselves there is a marked im-
provement in many classes of design and the hanging
is as nearly perfect as the conditions allow. I ndeed a
Briton may feel legitimate pride in taking a foreign
\ LSltOT to see the results of a year's work in our training
schools for applied art ; for there is proof of inven-
tion and fancy, as well as of knowledge of the right

use of materials. Although only lour years have
passed since the first of these notices appeared in
our pages, much has happened, both without South
Kensington and within. A wider interest in the
applied arts is evident outside its walls ; indeed it
may be safely alleged that at no period of the
present century was the world so wide awake to
British power for design. Within, as must needs
happen in a training establishment for young
people, the personnel of students shows almost
entire change. Those who were promising scholars
four years since are now out of pupilage ; mere
novices of that date are winning gold medals ; and
others then in knickerbockers or short frocks are
showing their prowess—one, a boy of fifteen,
scoring to the extent of a gold medal. Names
then only familiar to students of the local school
are now household words in technical circles ; while
their owners are enrolled in the great army of