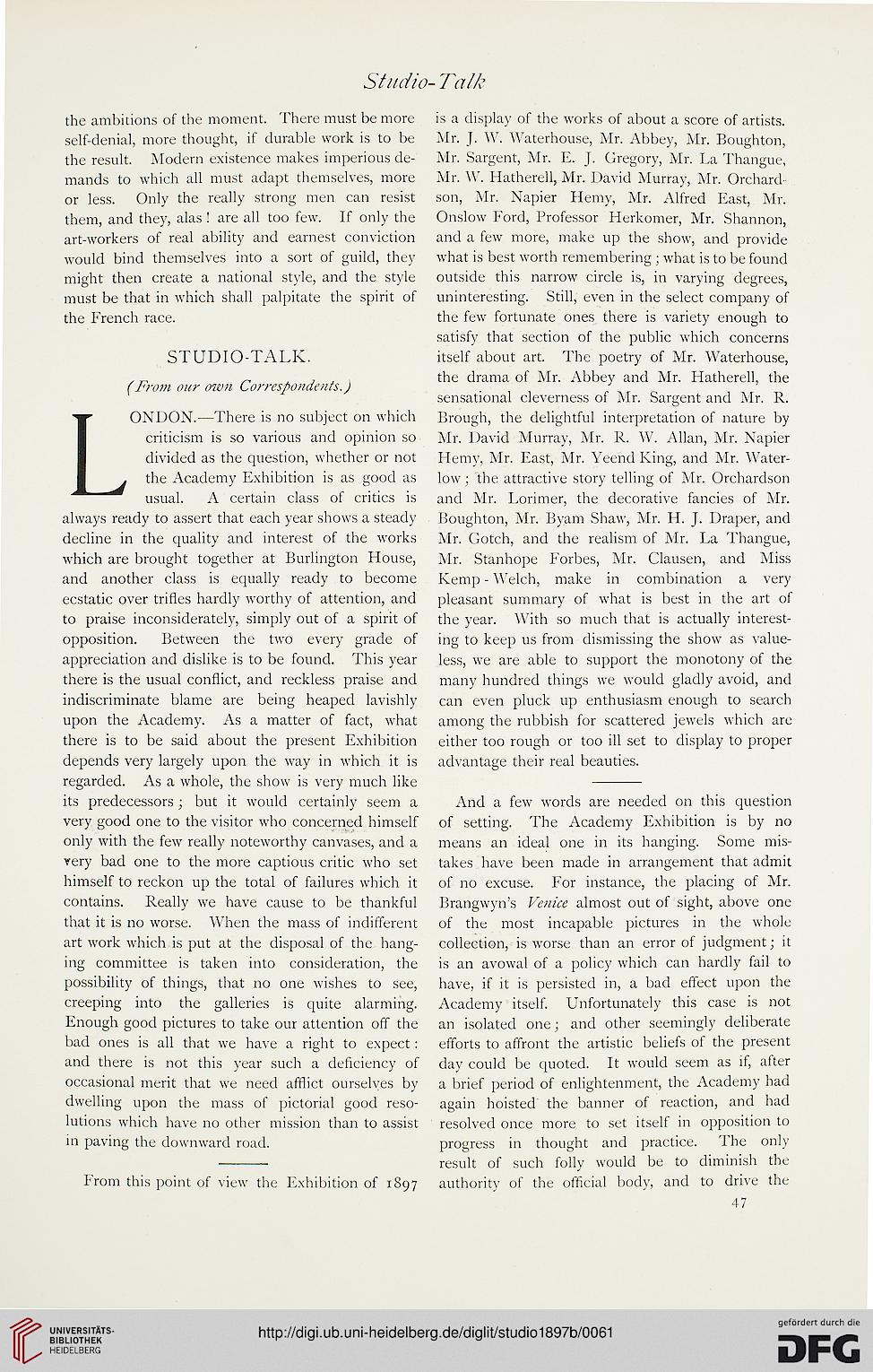 the ambitions of the moment. There must be more
self-denial, more thought, if durable work is to be
the result. Modern existence makes imperious de-
mands to which all must adapt themselves, more
or less. Only the really strong men can resist
them, and they, alas ! are all too few. If only the
art-workers of real ability and earnest conviction
would bind themselves into a sort of guild, they
might then create a national style, and the style
must be that in which shall palpitate the spirit of
the French race.

(From oar own Correspondents.)

LONDON.—There is no subject on which
criticism is so various and opinion so
divided as the question, whether or not
the Academy Exhibition is as good as
usual. A certain class of critics is
always ready to assert that each year shows a steady
decline in the quality and interest of the works
which are brought together at Burlington House,
and another class is equally ready to become
ecstatic over trifles hardly worthy of attention, and
to praise inconsiderately, simply out of a spirit of
opposition. Between the two every grade of
appreciation and dislike is to be found. This year
there is the usual conflict, and reckless praise and
indiscriminate blame are being heaped lavishly
upon the Academy. As a matter of fact, what
there is to be said about the present Exhibition
depends very largely upon the way in which it is
regarded. As a whole, the show is very much like
its predecessors ; but it would certainly seem a
very good one to the visitor who concerned himself
only with the few really noteworthy canvases, and a
very bad one to the more captious critic who set
himself to reckon up the total of failures which it
contains. Really we have cause to be thankful
that it is no worse. When the mass of indifferent
art work which is put at the disposal of the hang-
ing committee is taken into consideration, the
possibility of things, that no one wishes to see,
creeping into the galleries is quite alarming.
Enough good pictures to take our attention off the
bad ones is all that we have a right to expect :
and there is not this year such a deficiency of
occasional merit that we need afflict ourselves by
dwelling upon the mass of pictorial good reso-
lutions which have no other mission than to assist
in paving the downward road.

From this point of view the Exhibition of 1897

is a display of the works of about a score of artists.
Mr. J. W. Waterhouse, Mr. Abbey, Mr. Boughton,
Mr. Sargent, Mr. E. J. Gregory, Mr. La Thangue,
Mr. W. Hatherell, Mr. David Murray, Mr. Orchard-
son, Mr. Napier Hemy, Mr. Alfred East, Mr.
Onslow Ford, Professor Herkomer, Mr. Shannon,
and a few more, make up the show, and provide
what is best worth remembering ; what is to be found
outside this narrow circle is, in varying degrees,
uninteresting. Still, even in the select company of
the few fortunate ones there is variety enough to
satisfy that section of the public which concerns
itself about art. The poetry of Mr. Waterhouse,
the drama of Mr. Abbey and Mr. Hatherell, the
sensational cleverness of Mr. Sargent and Mr. R.
Brough, the delightful interpretation of nature by
Mr. David Murray, Mr. R. W. Allan, Mr. Napier
Hemy, Mr. East, Mr. Yeend King, and Mr. Water-
low ; the attractive story telling of Mr. Orchardson
and Mr. Lorimer, the decorative fancies of Mr.
Boughton, Mr. Byam Shaw, Mr. H. J. Draper, and
Mr. Gotch, and the realism of Mr. La Thangue,
Mr. Stanhope Forbes, Mr. Clausen, and Miss
Kemp - Welch, make in combination a very
pleasant summary of what is best in the art of
the year. With so much that is actually interest-
ing to keep us from dismissing the show as value-
less, we are able to support the monotony of the
many hundred things we would gladly avoid, and
can even pluck up enthusiasm enough to search
among the rubbish for scattered jewels which are
either too rough or too ill set to display to proper
advantage their real beauties.

And a few words are needed on this question
of setting. The Academy Exhibition is by no
means an ideal one in its hanging. Some mis-
takes have been made in arrangement that admit
of no excuse. For instance, the placing of Mr.
Brangwyn's Venice almost out of sight, above one
of the most incapable pictures in the whole
collection, is worse than an error of judgment; it
is an avowal of a policy which can hardly fail to
have, if it is persisted in, a bad effect upon the
Academy itself. Unfortunately this case is not
an isolated one; and other seemingly deliberate
efforts to affront the artistic beliefs of the present
day could be quoted. It would seem as if, after
a brief period of enlightenment, the Academy had
again hoisted the banner of reaction, and had
resolved once more to set itself in opposition to
progress in thought and practice. The only
result of such folly would be to diminish the
authority of the official body, and to drive the