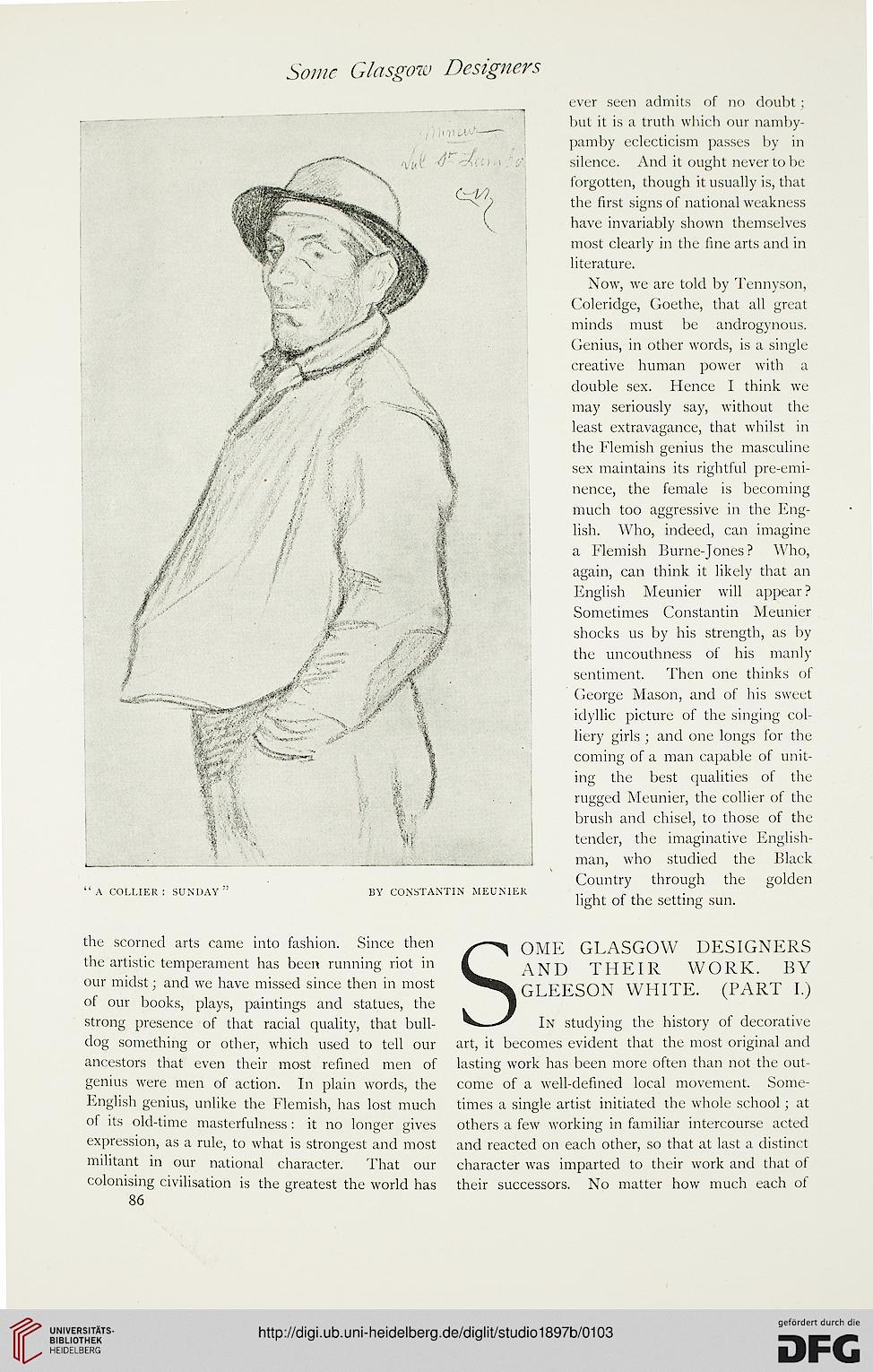 "A COLLIER: SUNDAY " BY CONSTANTIN MEUNIER

ever seen admits of no doubt ;
hut it is a truth which our namby-
pamby eclecticism passes by in
silence. And it ought never to he
forgotten, though it usually is, that
the first signs of national weakness
have invariably shown themselves
most clearly in the fine arts and in
literature.

Now, we are told by Tennyson,
Coleridge, Goethe, that all great
minds must be androgynous.
Genius, in other words, is a single
creative human power with a
double sex. Hence I think we
may seriously say, without the
least extravagance, that whilst in
the Flemish genius the masculine
sex maintains its rightful pre-emi-
nence, the female is becoming
much too aggressive in the Eng-
lish. Who, indeed, can imagine
a Flemish Burne-Jones ? Who,
again, can think it likely that an
English Meunier will appear?
Sometimes Constantin Meunier
shocks us by his strength, as by
the uncouthness of his manly
sentiment. Then one thinks of
George Mason, and of his sweet
idyllic picture of the singing col-
liery girls ; and one longs for the
coming of a man capable of unit-
ing the best qualities of the
rugged Meunier, the collier of the
brush and chisel, to those of the
tender, the imaginative English-
man, who studied the Black
Country through the golden
light of the setting sun.

the scorned arts came into fashion. Since then
the artistic temperament has been running riot in
our midst; and we have missed since then in most
of our books, plays, paintings and statues, the
strong presence of that racial quality, that bull-
dog something or other, which used to tell our
ancestors that even their most refined men of
genius were men of action. In plain words, the
English genius, unlike the Flemish, has lost much
of its old-time masterfulness : it no longer gives
expression, as a rule, to what is strongest and most
militant in our national character. That our
colonising civilisation is the greatest the world has
86

SOME GLASGOW DESIGNERS
AND THEIR WORK. BY
GLEESON WHITE. (PART I.)
In studying the history of decorative
art, it becomes evident that the most original and
lasting work has been more often than not the out-
come of a well-defined local movement. Some-
times a single artist initiated the whole school ; at
others a few working in familiar intercourse acted
and reacted on each other, so that at last a distinc t
character was imparted to their work and that of
their successors. No matter how much each of