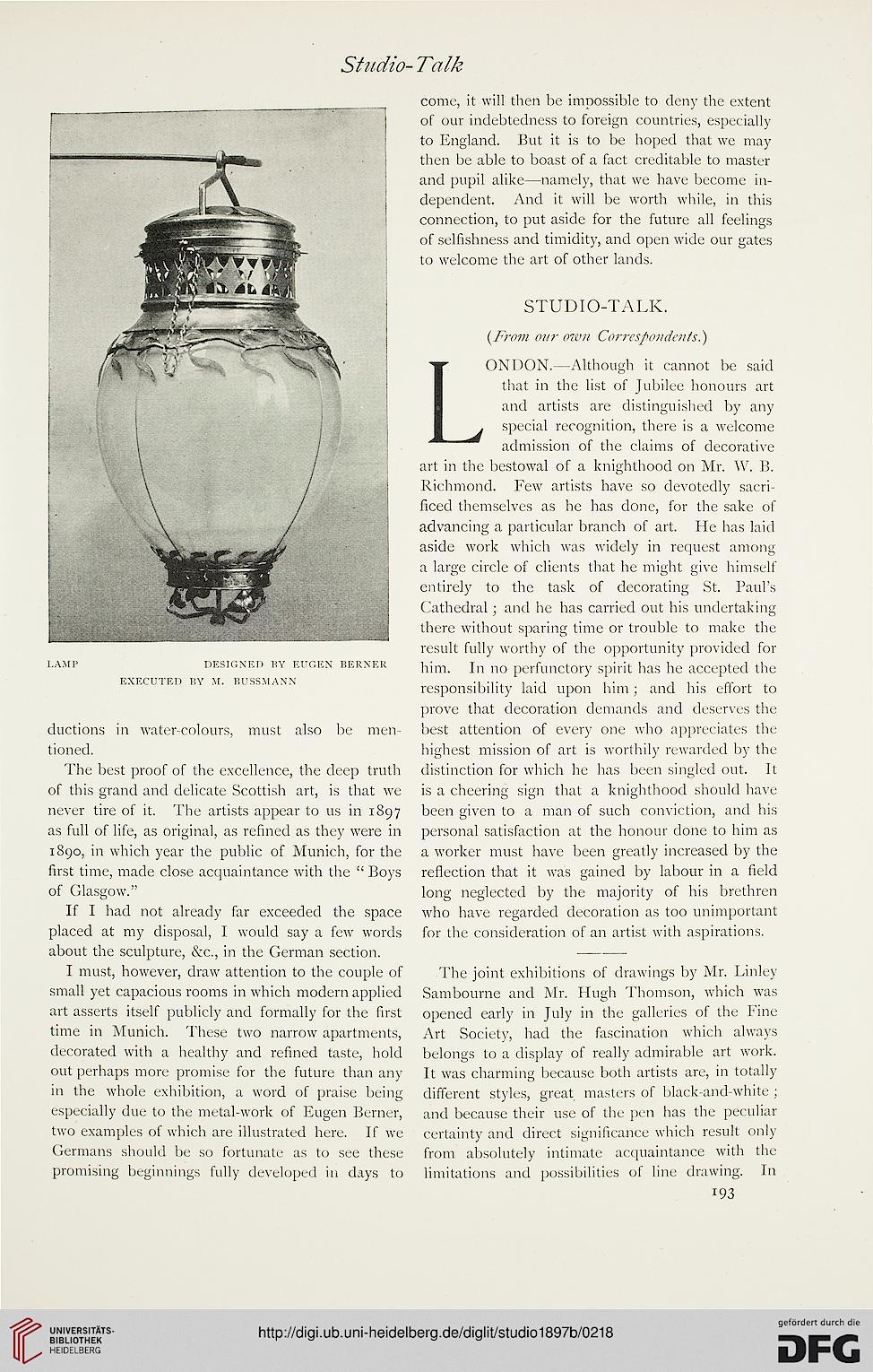 ductions in water-colours, must also be men-
tioned.

The best proof of the excellence, the deep truth
of this grand and delicate Scottish art, is that we
never tire of it. The artists appear to us in 1897
as full of life, as original, as refined as they were in
1890, in which year the public of Munich, for the
first time, made close acquaintance with the " Boys
of Glasgow."

If I had not already far exceeded the space
placed at my disposal, I would say a few words
about the sculpture, &c, in the German section.

I must, however, draw attention to the couple of
small yet capacious rooms in which modern applied
art asserts itself publicly and formally for the first
time in Munich. These two narrow apartments,
decorated with a healthy and refined taste, hold
out perhaps more promise for the future than any
in the whole exhibition, a word of praise being
especially due to the metal-work of Eugen Berner,
two examples of which are illustrated here. If we
Germans should be so fortunate as to see these
promising beginnings fully developed in days to

come, it will then be impossible to deny the extent
of our indebtedness to foreign countries, especially
to England. But it is to be hoped that we may
then be able to boast of a fact creditable to master
and pupil alike—namely, that we have become in-
dependent. And it will be worth while, in this
connection, to put aside for the future all feelings
of selfishness and timidity, and open wide our gates
to welcome the art of other lands.

LONDON.—Although it cannot be said
that in the list of Jubilee honours art
and artists are distinguished by any
special recognition, there is a welcome
admission of the claims of decorative
art in the bestowal of a knighthood on Mr. W. B.
Richmond. Few artists have so devotedly sacri-
ficed themselves as he has done, for the sake of
advancing a particular branch of art. He has laid
aside work which was widely in request among
a large circle of clients that he might give himself
entirely to the task of decorating St. Paul's
Cathedral; and he has carried out his undertaking
there without sparing time or trouble to make the
result fully worthy of the opportunity provided for
him. In no perfunctory spirit has he accepted the
responsibility laid upon him; and his effort to
prove that decoration demands and deserves the
best attention of every one who appreciates the
highest mission of art is worthily rewarded by the
distinction for which he has been singled out. It
is a cheering sign that a knighthood should have
been given to a man of such conviction, and his
personal satisfaction at the honour done to him as
a worker must have been greatly increased by the
reflection that it was gained by labour in a field
long neglected by the majority of his brethren
who have regarded decoration as too unimportant
for the consideration of an artist with aspirations.

The joint exhibitions of drawings by Mr. Linley
Sambourne and Mr. Hugh Thomson, which was
opened early in July in the galleries of the Fine
Art Society, had the fascination which always
belongs to a display of really admirable art work.
It was charming because both artists are, in totally
different styles, great masters of black-and-white ;
and because their use of the pen has the peculiar
certainty and direct significance which result only
from absolutely intimate acquaintance with the
limitations and possibilities of line drawing. In