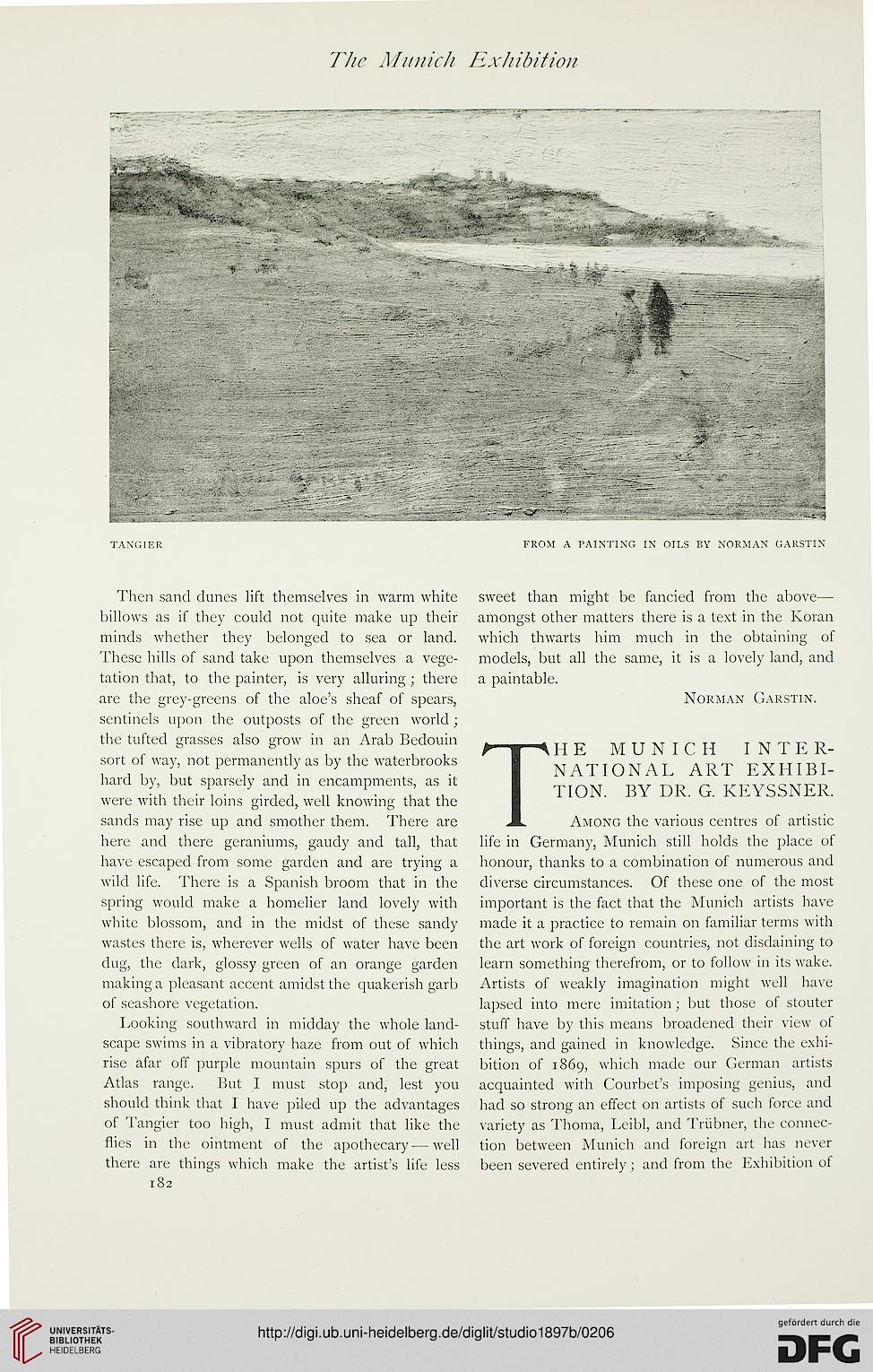 TANGIER FROM A PAINTING IN OILS BY NORMAN GARSTIN

Then sand dunes lift themselves in warm white
billows as if they could not quite make up their
minds whether they belonged to sea or land.
These hills of sand take upon themselves a vege-
tation that, to the painter, is very alluring ; there
are the grey-greens of the aloe's sheaf of spears,
sentinels upon the outposts of the green world;
the tufted grasses also grow in an Arab Bedouin
sort of way, not permanently as by the waterbrooks
hard by, but sparsely and in encampments, as it
were with their loins girded, well knowing that the
sands may rise up and smother them. There are
here and there geraniums, gaudy and tall, that
have escaped from some garden and are trying a
wild life. There is a Spanish broom that in the
spring would make a homelier land lovely with
white blossom, and in the midst of these sandy
wastes there is, wherever wells of water have been
dug, the dark, glossy green of an orange garden
making a pleasant accent amidst the quakerish garb
of seashore vegetation.

Looking southward in midday the whole land-
scape swims in a vibratory haze from out of which
rise afar off purple mountain spurs of the great
Atlas range. But I must stop and, lest you
should think that I have piled up the advantages
of Tangier too high, I must admit that like the
flies in the ointment of the apothecary—well
there are things which make the artist's life less
182

sweet than might be fancied from the above—-
amongst other matters there is a text in the Koran
which thwarts him much in the obtaining of
models, but all the same, it is a lovely land, and
a paintable.

THE MUNICH INTER-
NATIONAL ART EXHIBI-
TION. BY DR. G. KEYSSNER.
Among the various centres of artistic
life in Germany, Munich still holds the place of
honour, thanks to a combination of numerous and
diverse circumstances. Of these one of the most
important is the fact that the Munich artists have
made it a practice to remain on familiar terms with
the art work of foreign countries, not disdaining to
learn something therefrom, or to follow in its wake.
Artists of weakly imagination might well have
lapsed into mere imitation; but those of stouter
stuff have by this means broadened their view of
things, and gained in knowledge. Since the exhi-
bition of 1869, which made our German artists
acquainted with Courbet's imposing genius, and
had so strong an effect on artists of such force and
variety as Thoma, Leibl, and Triibner, the connec-
tion between Munich and foreign art has never
been severed entirely; and from the Exhibition of