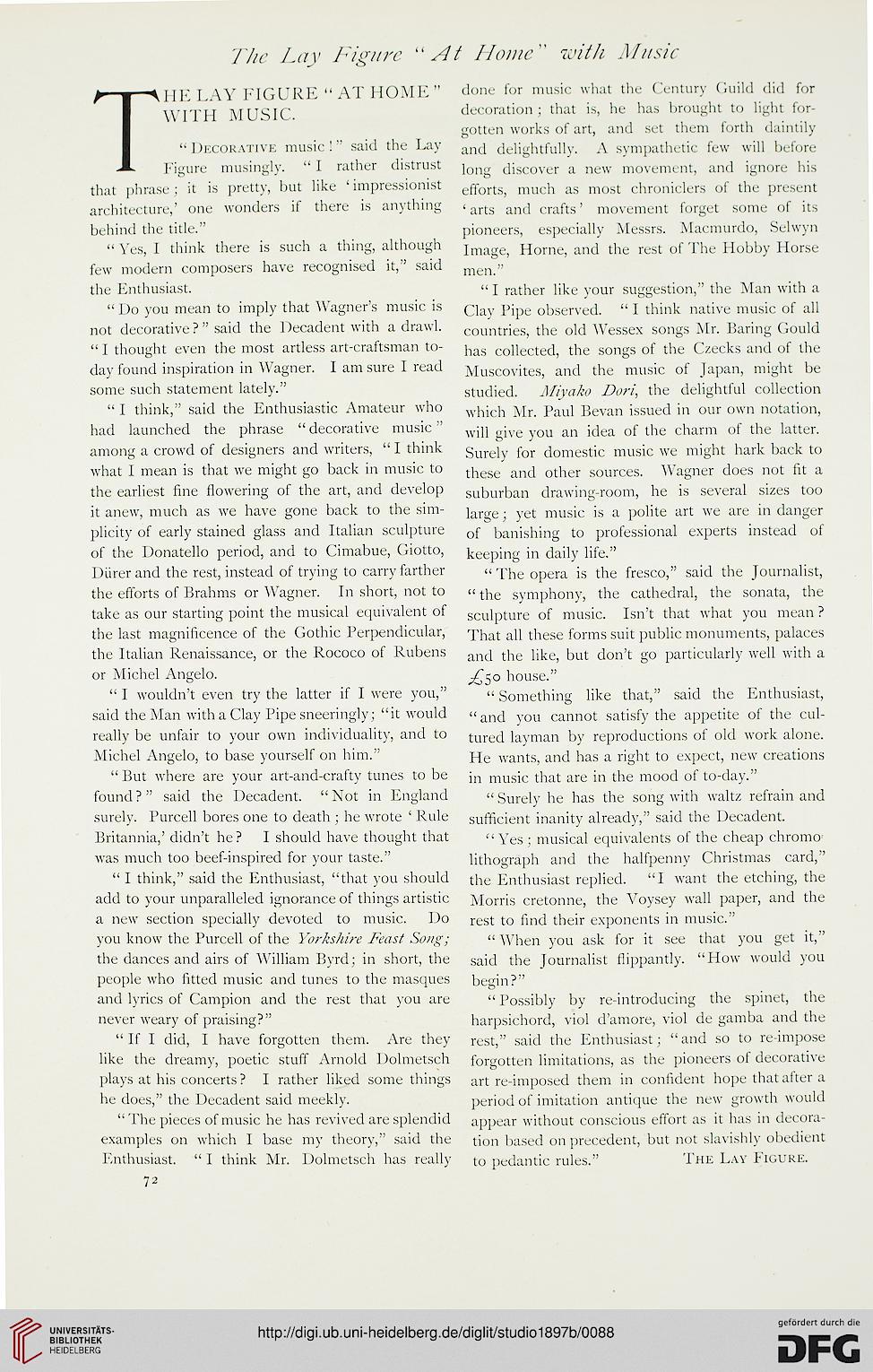 WITH MUSIC. decoration: that is, he has brought to light for-
gotten works of art, and set them forth daintily

"Decorative music!" said the Lay and delightfully. A sympathetic few will before

Figure musingly. " I rather distrust k discover a new movement and ignore his

that phrase; it is pretty, but like 'impressionist effortSj much as most chroniclers of the present

architecture,' one wonders if there is anything « t an(1 crafts> movement forget some of its

"Yes, 1 think there is such a thing, although Image5 Home, and the rest of The Hobby Horse
few modern composers have recognised it," said

the Enthusiast. « \ rather like your suggestion," the Man with

" 1)(» you mean to imply that Wagner's music is Clay pipe observed. " I think native music of all

not decorative?" said the Decadent with a drawl. countries, the old Wessex songs Mr. Baring Could

" I thought even the most artless art-craftsman to- has collected, the songs of the Czecks and of the

day found inspiration in Wagner. I am sure I read Muscovites, and the music of Japan, might be

some such statement lately." studied. Miyako Dori, the delightful collection

' I think," said the Enthusiastic Amateur who which Mr> paul Bevan issued in our own notation,

had launched the phrase "decorative music" wm give you an idea of the charm of the latter,

among a crowd of designers and writers, " I think Surely for domestic music we might hark back to

what I mean is that we might go back in music to these and other sources. Wagner does not fit a

the earliest fine flowering of the art, and develop suburban drawing-room, he is several sizes too

it anew, much as we have gone back to the sim- large . yet music is a polite art we are in danger

of the Donatello period, and to Cimabue, Giotto, keeping in daily life."

Durerand the rest, instead of trying to carry farther « The opera [s the fresco," said the Journalist,

the efforts of Brahms or Wagner. In short, not to c< the symphony, the cathedral, the sonata, the

take as our starting point the musical equivalent of sculpture of music. Isn't that what you mean r

the last magnificence of the Gothic Perpendicular, That all these forms suit public monuments, palaces

the Italian Renaissance, or the Rococo of Rubens anj tne 1^ Dut don't go particularly well with a

" I wouldn't even try the latter if I were you," « Something like that," said the Enthusiast,

said the Man with a Clay Pipe sneeringly; "it would «an(j you cannot satisfy the appetite of the cul-

really be unfair to your own individuality, and to tured iayman by reproductions of old work alone.

Michel Angelo, to base yourself on him." He wants, and has a right to expect, new creations

"But where are your art-and-crafty tunes to be in music that are in the mood of to-day."
found?" said the Decadent. "Not in England "Surely he has the song with waltz refrain and

surely. Purcell bores one to death ; he wrote ' Rule sufficient inanity already," said the Decadent.
Britannia,' didn't he? I should have thought that « Yes ; musical equivalents of the cheap chromo

was much too beef-inspired for your taste." lithograph and the halfpenny Christmas card,"

add to your unparalleled ignorance of things artistic Morris cretonne, the Voysey wall paper, and the

a new section specially devoted to music. Do rest to find their exponents in music."
you know the Purcell of the Yorkshire Feast Song; « When you ask for it see that you get it,"

the dances and airs of William Byrd; in short, the said the Journalist flippantly. "How would you

people who fitted music and tunes to the masques begin?"

and lyrics of Campion and the rest that you are " Possibly by re-introducing the spinet, the

"If I did, I have forgotten them. Are they rest," said the Enthusiast; "and so to re-impose

like the dreamy, poetic stuff Arnold Dolmetsch forgotten limitations, as the pioneers of decorative

plays at his concerts? I rather liked some things art re-imposed them in confident hope that alter a

he does," the Decadent said meekly. period of imitation antique the new growth would

"The pieces of music he has revived are splendid appear without conscious effort as it has in decora-
examples on which I base my theory," said the tion based on precedent, but not slavishly obedient
Enthusiast. "I think Mr. Dolmetsch has really to pedantic rules." the Lay figure.
72