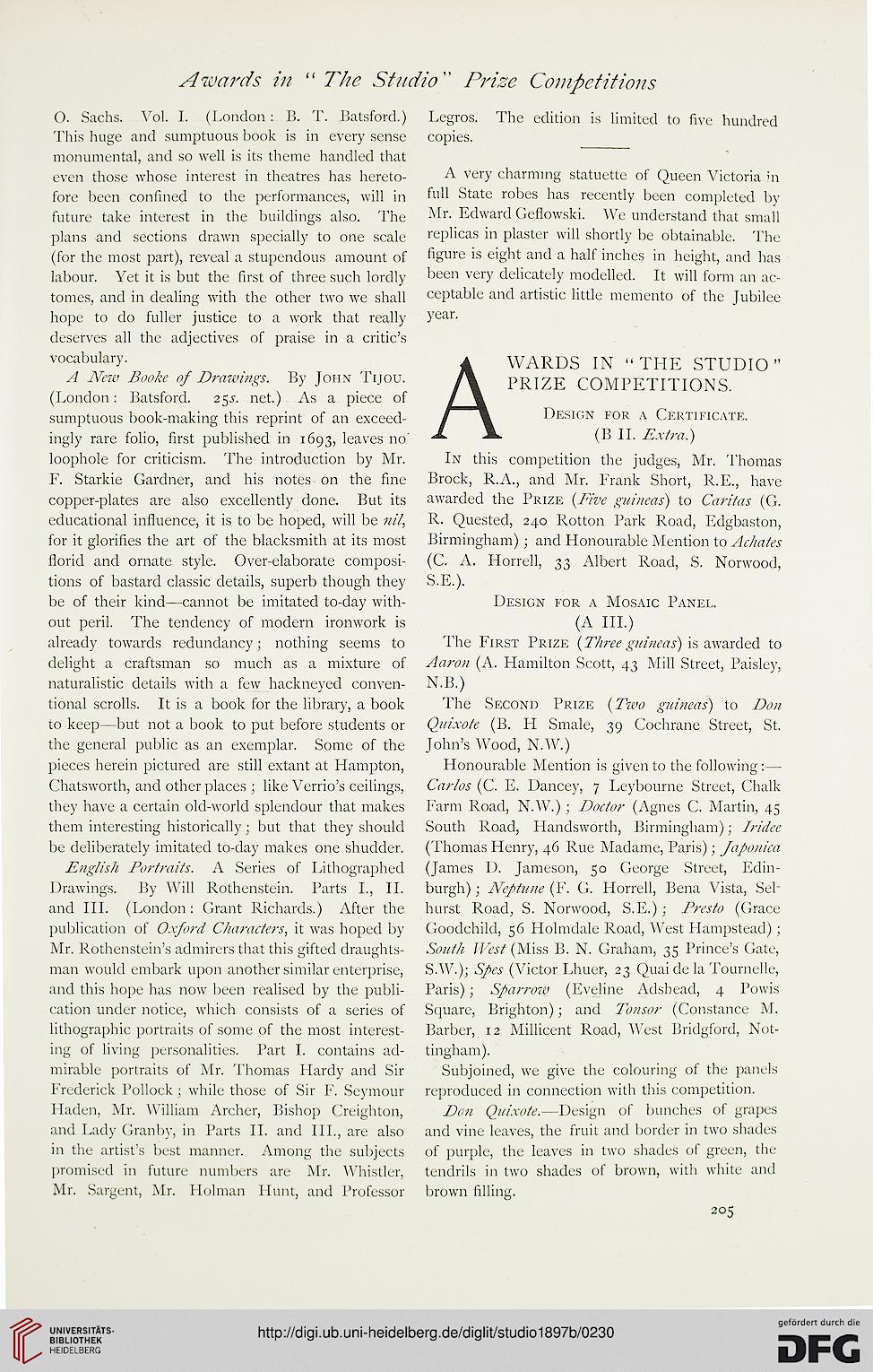 O. Sachs. Vol. I. (London : B. T. Batsford.) Legros. The edition is limited to five hundred

This huge and sumptuous book is in every sense copies,
monumental, and so well is its theme handled that

fore been confined to the performances, will in full State robes has recently been completed by

future take interest in the buildings also. The Mr.-Edward Geflowski. We understand that small

plans and sections drawn specially to one scale replicas in plaster will shortly be obtainable. The

(for the most part), reveal a stupendous amount of ngure is eight and a half inches in height, and has

labour. Yet it is but the first of three such lordly been verY delicately modelled. It will form an ac-

tomes, and in dealing with the other two we shall ceptable and artistic little memento of the Jubilee

hope to do fuller justice to a work that really year,
deserves all the adjectives of praise in a critic's

vocabulary. a WARDS IN "THE STUDIO"

sumptuous book-making this reprint of an exceed- / Design for a Certificate.

loophole for criticism. The introduction by Mr. In this competition the judges, Mr. Thomas

F. Starkie Gardner, and his notes on the fine Brock, R.A., and Mr. Frank Short, R.E., have

copper-plates are also excellently done. But its awarded the Prize (Five guineas) to Caritas (G.

educational influence, it is to be hoped, will be nil, R. Quested, 240 Rotton Park Road, Edgbaston,

for it glorifies the art of the blacksmith at its most Birmingham); and Honourable Mention to Achates

tions of bastard classic details, superb though they S.E.).

be of their kind—cannot be imitated to-day with- Design for a Mosaic Panel.

out peril. The tendency of modern ironwork is (A III.)

already towards redundancy; nothing seems to The First Prize {Threeguineas) is awarded to

delight a craftsman so much as a mixture of Aaron (A. Hamilton Scott, 43 Mill Street, Paisley,

tional scrolls. It is a book for the library, a book The Second Prize (Two guineas) to Don

to keep—but not a book to put before students or Quixote (B. H Smale, 39 Cochrane Street, St.

the general public as an exemplar. Some of the John's Wood, N.W.)

mirable portraits of Mr. Thomas Hardy and Sir Subjoined, we give the colouring of the panels

Frederick Pollock ; while those of Sir F. Seymour reproduced in connection with this competition.

and Lady Granby, in Parts II. and III., are also and vine leaves, the fruit and border in two shades

in the artist's best manner. Among the subjects of purple, the leaves in two shades of green, the

promised in future numbers are Mr. Whistler, tendrils in two shades of brown, with white and