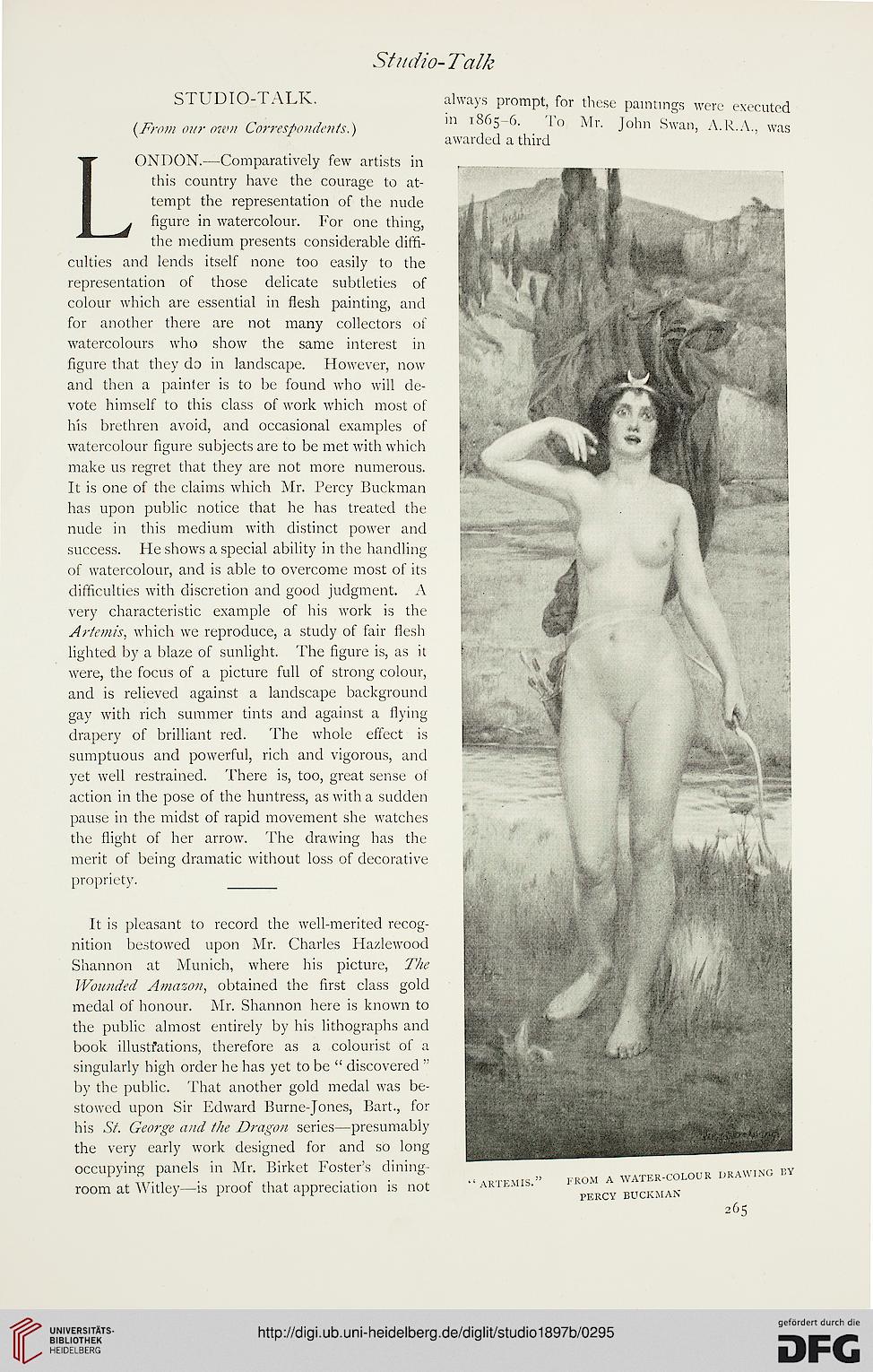 {From oar own Correspondents.)

LONDON.—Comparatively few artists in
this country have the courage to at-
tempt the representation of the nude
figure in watercolour. For one thing,
the medium presents considerable diffi-
culties and lends itself none too easily to the
representation of those delicate subtleties of
colour which are essential in flesh painting, and
for another there are not many collectors of
watercolours who show the same interest in
figure that they do in landscape. However, now
and then a painter is to be found who will de-
vote himself to this class of work which most of
his brethren avoid, and occasional examples of
watercolour figure subjects are to be met with which
make us regret that they are not more numerous.
It is one of the claims which Mr. Percy Buckman
has upon public notice that he has treated the
nude in this medium with distinct power and
success. He shows a special ability in the handling
of watercolour, and is able to overcome most of its
difficulties with discretion and good judgment. A
very characteristic example of his work is the
Artemis, which we reproduce, a study of fair flesh
lighted by a blaze of sunlight. The figure is, as it
were, the focus of a picture full of strong colour,
and is relieved against a landscape background
gay with rich summer tints and against a flying
drapery of brilliant red. The whole effect is
sumptuous and powerful, rich and vigorous, and
yet well restrained. There is, too, great sense of
action in the pose of the huntress, as with a sudden
pause in the midst of rapid movement she watches
the flight of her arrow. The drawing has the
merit of being dramatic without loss of decorative
propriety. _

It is pleasant to record the well-merited recog-
nition bestowed upon Mr. Charles Hazlewood
Shannon at Munich, where his picture, The
Wounded Amazon, obtained the first class gold
medal of honour. Mr. Shannon here is known to
the public almost entirely by his lithographs and
book illustrations, therefore as a colourist of a
singularly high order he has yet to be " discovered "
by the public. That another gold medal was be-
stowed upon Sir Edward Burne-Jones, Bart., for
his St. George and the Dragon series—presumably
the very early work designed for and so long
occupying panels in Mr. Birket Foster's dining-
room at Witley—is proof that appreciation is not

always prompt, for these paintings were executed
in 1865-6. To Mr. John Swan, A.R.A., was
awarded a third