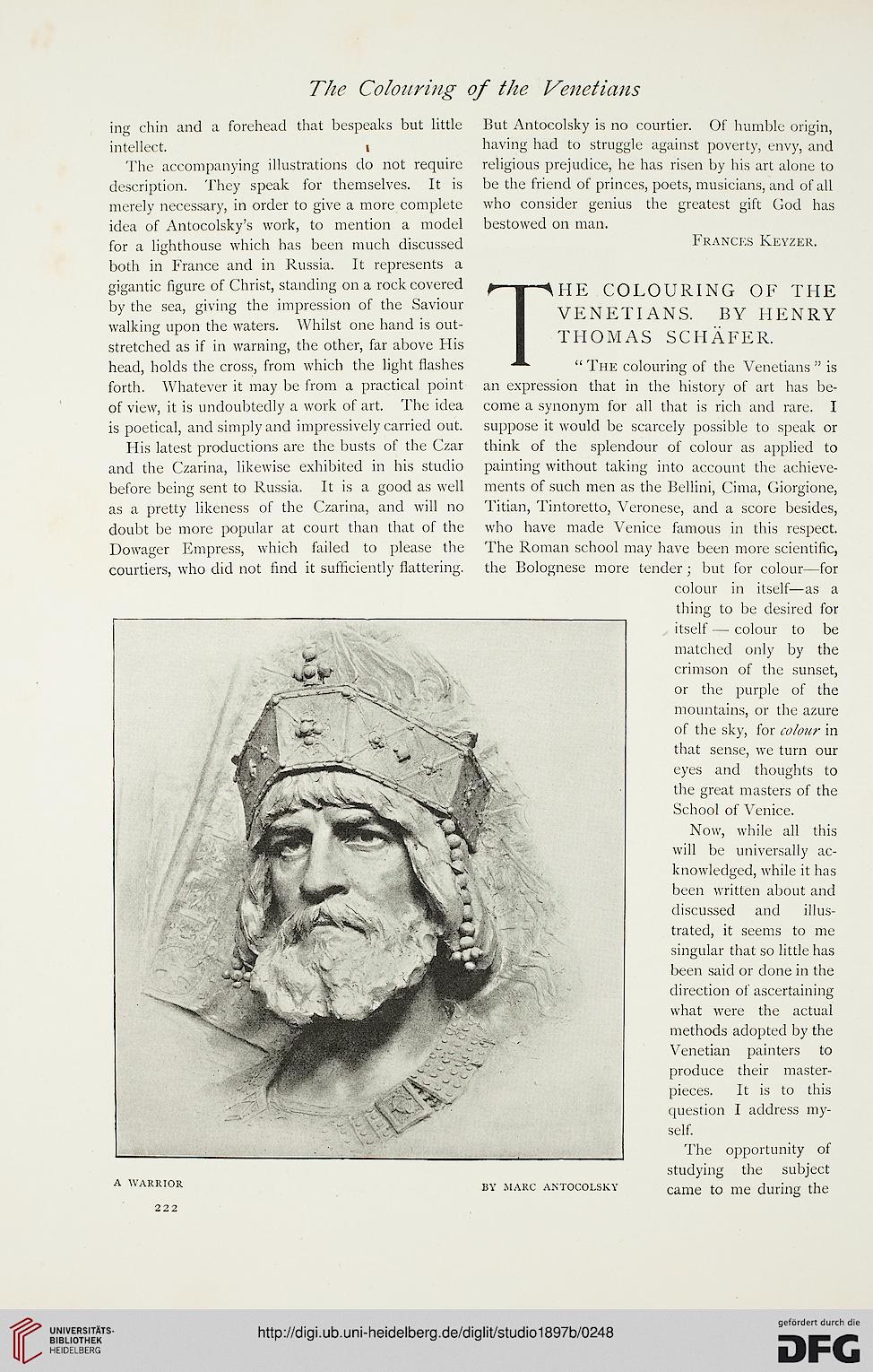 Information about OCR text
The Colouring of the Venetians

ing chin and a forehead that bespeaks but little But Antocolsky is no courtier. Of humble origin,
intellect. 1 having had to struggle against poverty, envy, and

The accompanying illustrations do not require religious prejudice, he has risen by his art alone to
description. They speak for themselves. It is be the friend of princes, poets, musicians, and of all
merely necessary, in order to give a more complete who consider genius the greatest gift God has
idea of Antocolsky's work, to mention a model bestowed on man.

for a lighthouse which has been much discussed Frances Keyzer.

both in France and in Russia. It represents a

gigantic figure of Christ, standing on a rock covered p ■ ^ COLOURING OF THE

by the sea, giving the impression of the Saviour I VENETIANS BY HENRY

walking upon the waters. Whilst one hand is out- I ' ••

stretched as if in warning, the other, far above His otrlArbK.
head, holds the cross, from which the light flashes «*> " The colouring of the Venetians " is

forth. Whatever it may be from a practical point an expression that in the history of art has be-
of view, it is undoubtedly a work of art. The idea come a synonym for all that is rich and rare. I
is poetical, and simply and impressively carried out. suppose it would be scarcely possible to speak or
His latest productions are the busts of the Czar think of the splendour of colour as applied to
and the Czarina, likewise exhibited in his studio painting without taking into account the achieve-
before being sent to Russia. It is a good as well ments of such men as the Bellini, Cima, Giorgione,
as a pretty likeness of the Czarina, and will no Titian, Tintoretto, Veronese, and a score besides,
doubt be more popular at court than that of the who have made Venice famous in this respect.
Dowager Empress, which failed to please the The Roman school may have been more scientific,
courtiers, who did not find it sufficiently flattering, the Bolognese more tender; but for colour—for

colour in itself— as a
thing to be desired for
itself — colour to be
matched only by the
crimson of the sunset,
or the purple of the
mountains, or the azure
of the sky, for colour in
that sense, we turn our
eyes and thoughts to
the great masters of the
School of Venice.

Now, while all this
will be universally ac-
knowledged, while it has
been written about and
discussed and illus-
trated, it seems to me
singular that so little has
been said or done in the
direction of ascertaining
what were the actual
methods adopted by the
Venetian painters to
produce their master-
pieces. It is to this
question I address my-
self.

The opportunity of
studying the subject

A WARRIOR BY MARC ANTOCOLSKY came to me during the