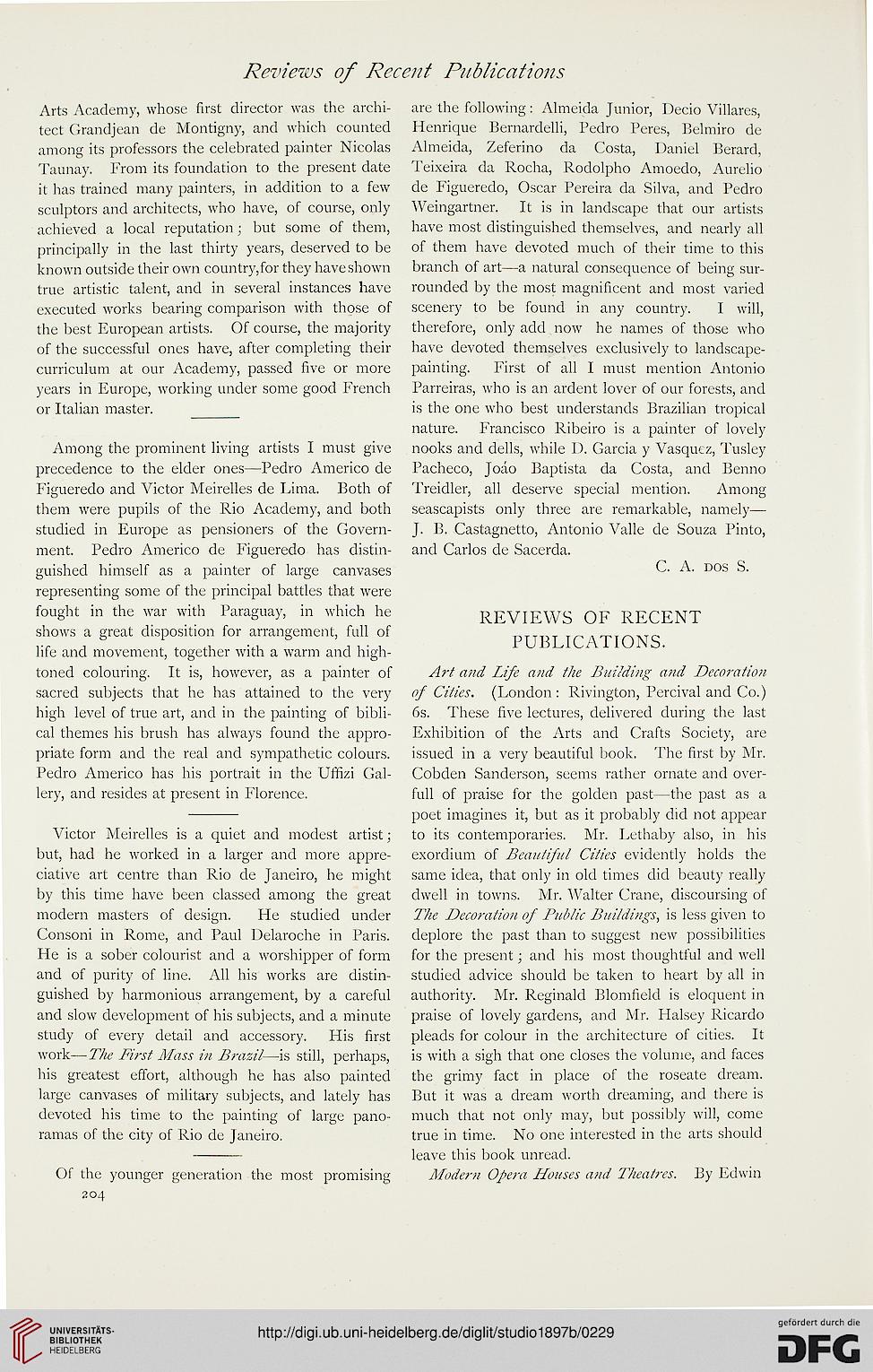 Arts Academy, whose first director was the archi- are the following: Almeida Junior, Decio Villares,
tect Grandjean de Montigny, and which counted Henrique Bernardelli, Pedro Peres, Belmiro de
among its professors the celebrated painter Nicolas Almeida, Zeferino da Costa, Daniel Berard,
Taunay. From its foundation to the present date Teixeira da Rocha, Rodolpho Amoedo, Aurelio
it has trained many painters, in addition to a few de Figueredo, Oscar Pereira da Silva, and Pedro
sculptors and architects, who have, of course, only Weingartner. It is in landscape that our artists
achieved a local reputation; but some of them, have most distinguished themselves, and nearly all
principally in the last thirty years, deserved to be of them have devoted much of their time to this
known outside their own country,for they have shown branch of art—a natural consequence of being sur-
true artistic talent, and in several instances have rounded by the most magnificent and most varied
executed works bearing comparison with those of scenery to be found in any country. I will,
the best European artists. Of course, the majority therefore, only add now he names of those who
of the successful ones have, after completing their have devoted themselves exclusively to landscape-
curriculum at our Academy, passed five or more painting. First of all I must mention Antonio
years in Europe, working under some good French Parreiras, who is an ardent lover of our forests, and

or Italian master. _ is the one who best understands Brazilian tropical

nature. Francisco Ribeiro is a painter of lovely

Among the prominent living artists I must give nooks and dells, while D. Garcia y Vasquez, Tusley

Figueredo and Victor Meirelles de Lima. Both of Treidler, all deserve special mention. Among

them were pupils of the Rio Academy, and both seascapists only three are remarkable, namely—

studied in Europe as pensioners of the Govern- J. B. Castagnetto, Antonio Valle de Souza Pinto,

guished himself as a painter of large canvases C. A. dos S.

representing some of the principal battles that were

fought in the war with Paraguay, in which he REVIEWS OF RECENT

shows a great disposition for arrangement, full of
life and movement, together with a warm and high-
toned colouring. It is, however, as a painter of Art and Life and the Building and Decoration

sacred subjects that he has attained to the very of Cities. (London : Rivington, Percival and Co.)

high level of true art, and in the painting of bibli- 6s. These five lectures, delivered during the last

cal themes his brush has always found the appro- Exhibition of the Arts and Crafts Society, are

priate form and the real and sympathetic colours. issued in a very beautiful book. The first by Mr.

Pedro Americo has his portrait in the Uffizi Gal- Cobden Sanderson, seems rather ornate and over-

lery, and resides at present in Florence. full of praise for the golden past—the past as a

- poet imagines it, but as it probably did not appear

Victor Meirelles is a quiet and modest artist; to its contemporaries. Mr. Lethaby also, in his

but, had he worked in a larger and more appre- exordium of Beautiful Cities evidently holds the

ciative art centre than Rio de Janeiro, he might same idea, that only in old times did beauty really

by this time have been classed among the great dwell in towns. Mr. Walter Crane, discoursing of

modern masters of design. He studied under The Decoration of Public Buildings, is less given to

Consoni in Rome, and Paul Delaroche in Paris. deplore the past than to suggest new possibilities

He is a sober colourist and a worshipper of form for the present; and his most thoughtful and well

and of purity of line. All his works are distin- studied advice should be taken to heart by all in

guished by harmonious arrangement, by a careful authority. Mr. Reginald Blomfield is eloquent in

and slow development of his subjects, and a minute praise of lovely gardens, and Mr. Halsey Ricardo

study of every detail and accessory. His first pleads for colour in the architecture of cities. It

work—The First Mass in Brazil—is still, perhaps, is with a sigh that one closes the volume, and faces

his greatest effort, although he has also painted the grimy fact in place of the roseate dream,

large canvases of military subjects, and lately has But it was a dream worth dreaming, and there is

devoted his time to the painting of large pano- much that not only may, but possibly will, come

ramas of the city of Rio de Janeiro. true in time. No one interested in the arts should

Of the younger generation the most promising Modern Opera Houses and Theatres. By Edwin
204