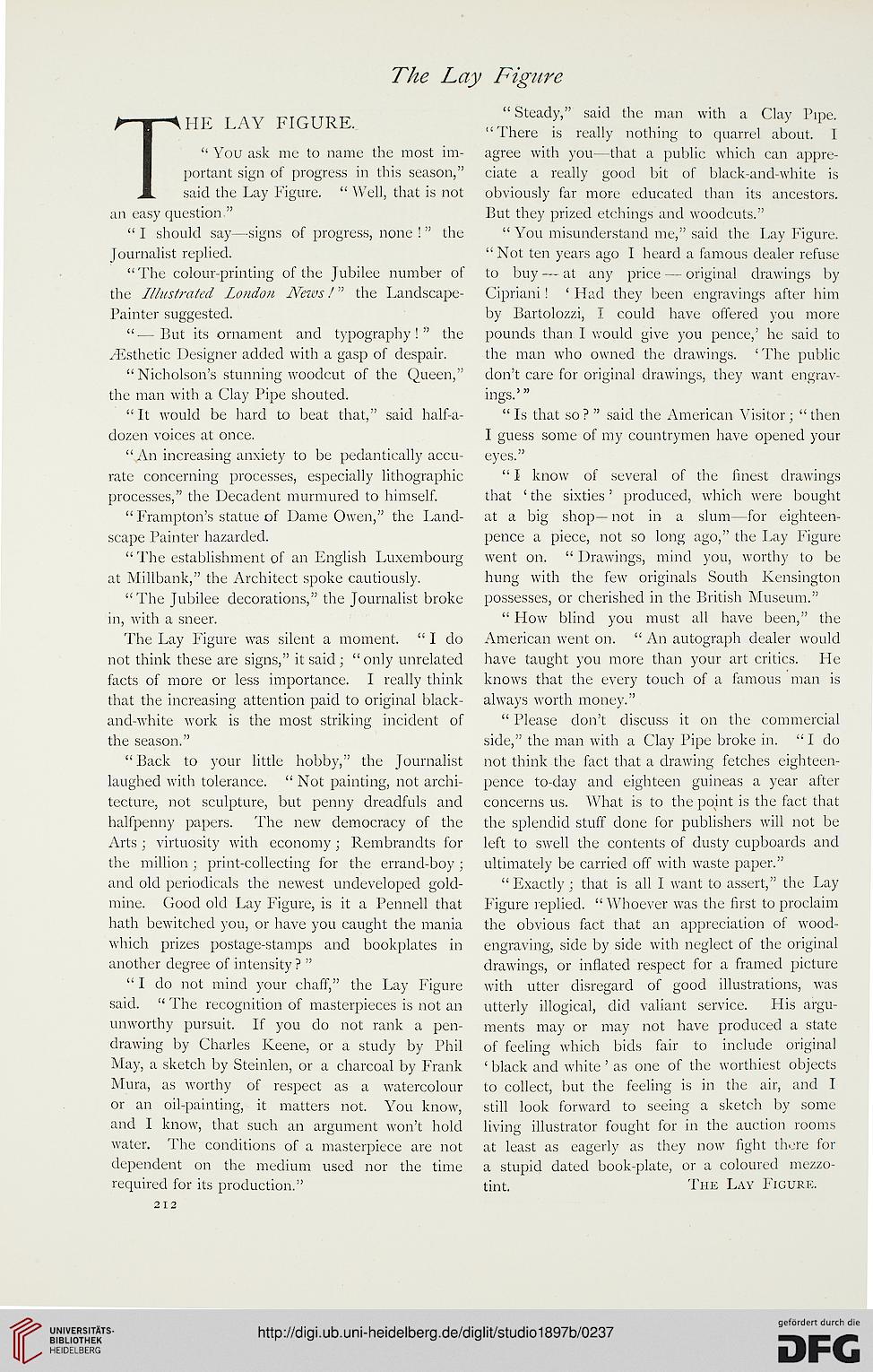 THE LAY FIGURE.
" You ask me to name the most im-
portant sign of progress in this season,"
said the Lay Figure. " Well, that is not
an easy question "

" I should say—signs of progress, none ! " the
Journalist replied.

"The colour-printing of the Jubilee number of
the Illustrated London News!" the Landscape-
Painter suggested.

"—But its ornament and typography!" the
./Esthetic Designer added with a gasp of despair.

" Nicholson's stunning woodcut of the Queen,"
the man with a Clay Pipe shouted.

"It would be hard to beat that," said half-a-
dozen voices at once.

" An increasing anxiety to be pedantically accu-
rate concerning processes, especially lithographic
processes," the Decadent murmured to himself.

" The establishment of an English Luxembourg
at Millbank," the Architect spoke cautiously,

"The Jubilee decorations," the Journalist broke
in, with a sneer.

The Lay Figure was silent a moment. "I do
not think these are signs," it said; "only unrelated
facts of more or less importance. I really think
that the increasing attention paid to original black-
and-white work is the most striking incident of
the season."

"Back to your little hobby," the Journalist
laughed with tolerance. " Not painting, not archi-
tecture, not sculpture, but penny dreadfuls and
halfpenny papers. The new democracy of the
Arts ; virtuosity with economy; Rembrandts for
the million ; print-collecting for the errand-boy ;
and old periodicals the newest undeveloped gold-
mine. Good old Lay Figure, is it a Pennell that
hath bewitched you, or have you caught the mania
which prizes postage-stamps and bookplates in
another degree of intensity ? "

"I do not mind your chaff," the Lay Figure
said. " The recognition of masterpieces is not an
unworthy pursuit. If you do not rank a pen-
drawing by Charles Keene, or a study by Phil
May, a sketch by Steinlen, or a charcoal by Frank
Mura, as worthy of respect as a watercolour
or an oil-painting, it matters not. You know,
and I know, that such an argument won't hold
water. The conditions of a masterpiece are not
dependent on the medium used nor the time
required for its production."

" Steady," said the man with a Clay Pipe.
"There is really nothing to quarrel about. I
agree with you—that a public which can appre-
ciate a really good bit of black-and-white is
obviously far more educated than its ancestors.
But they prized etchings and woodcuts."

" You misunderstand me," said the Lay Figure.
" Not ten years ago I heard a famous dealer refuse
to buy — at any price — original drawings by
Cipriani! ' Had they been engravings after him
by Bartolozzi, I could have offered you more
pounds than I would give you pence,' he said to
the man who owned the drawings. 'The public
don't care for original drawings, they want engrav-
ings.' "

" Is that so ? " said the American Visitor ; " then
I guess some of my countrymen have opened your
eyes."

" I know of several of the finest drawings
that ' the sixties' produced, which were bought
at a big shop— not in a slum—for eighteen-
pence a piece, not so long ago," the Lay Figure
went on. " Drawings, mind you, worthy to be
hung with the few originals South Kensington
possesses, or cherished in the British Museum."

" How blind you must all have been," the
American went on. " An autograph dealer would
have taught you more than your art critics. He
knows that the every touch of a famous man is
always worth money."

" Please don't discuss it on the commercial
side," the man with a Clay Pipe broke in. "I do
not think the fact that a drawing fetches eighteen-
pence to-day and eighteen guineas a year after
concerns us. What is to the point is the fact that
the splendid stuff done for publishers will not be
left to swell the contents of dusty cupboards and
ultimately be carried off with waste paper."

"Exactly; that is all I want to assert," the Lay
Figure replied. " Whoever was the first to proclaim
the obvious fact that an appreciation of wood-
engraving, side by side with neglect of the original
drawings, or inflated respect for a framed picture
with utter disregard of good illustrations, was
utterly illogical, did valiant service. His argu-
ments may or may not have produced a state
of feeling which bids fair to include original
' black and white ' as one of the worthiest objects
to collect, but the feeling is in the air, and I
still look forward to seeing a sketch by some
living illustrator fought for in the auction rooms
at least as eagerly as they now fight there for
a stupid dated book-plate, or a coloured mezzo-
tint. The Lay Figure.