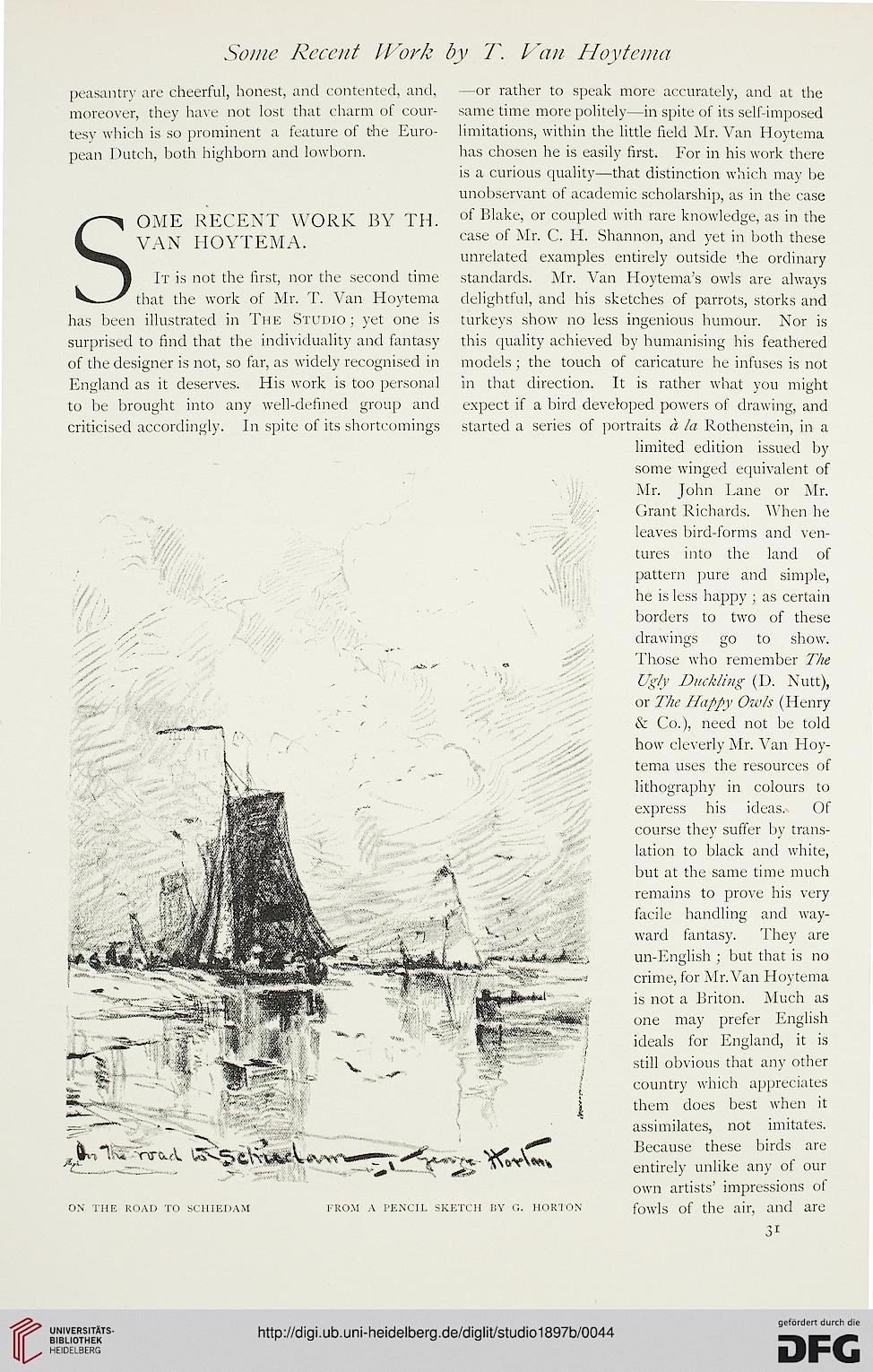 peasantry are cheerful, honest, and contented, and, -or rather to speak more accurately, and at the
moreover, they have not lost that charm of cour- same time more politely—in spite of its self-imposed
tesy which is so prominent a feature of the Euro- limitations, within the little field Mr. Van Hoytema
pean Dutch, both highborn and lowborn. has chosen he is easily first. For in his work there

is a curious quality—that distinction which may be
unobservant of academic scholarship, as in the case

SOME RECENT WORK BY TH. of Blake, or coupled with rare knowledge, as in the
V AN HOYTEMA caSe °^ ^' ^* Shannon, and yet in both these

unrelated examples entirely outside the ordinary
It is not the first, nor the second time standards. Mr. Van Hoytema's owls are always
that the work of Mr. T. Van Hoytema delightful, and his sketches of parrots, storks and
has been illustrated in The Studio ; yet one is turkeys show no less ingenious humour. Nor is
surprised to find that the individuality and fantasy this quality achieved by humanising his feathered
of the designer is not, so far, as widely recognised in models ; the touch of caricature he infuses is not
England as it deserves. His work is too personal in that direction. It is rather what you might
to be brought into any well-defined group and expect if a bird developed powers of drawing, and
criticised accordingly. In spite of its shortcomings started a series of portraits a la Rothenstein, in a

limited edition issued by
some winged equivalent of
Mr. John Lane or Mr.
Grant Richards. When he

leaves bird-forms and ven-
tures into the land of
pattern pure and simple,
he is less happy ; as certain
borders to two of these
drawings go to show.
Those who remember The
Ugly Duckling (D. Nutt),
or The Happy Owls (Henry
& Co.), need not be told
how cleverly Mr. Van Hoy-
tema uses the resources of
lithography in colours to
express his ideas. Of
course they suffer by trans-
lation to black and white,
but at the same time much
remains to prove his very
facile handling and way-
ward fantasy. They are
un-English ; but that is no
crime, for Mr.Van Hoytema
is not a Briton. Much as
one may prefer English
ideals for England, it is
still obvious that any other
country which appreciates
them does best when it
§ \ " assimilates, not imitates.

own artists' impressions of

ON THE ROAD TO SCHIEDAM FROM A PENeiL SKETCH BY G. HORTON fowls of the air, and are