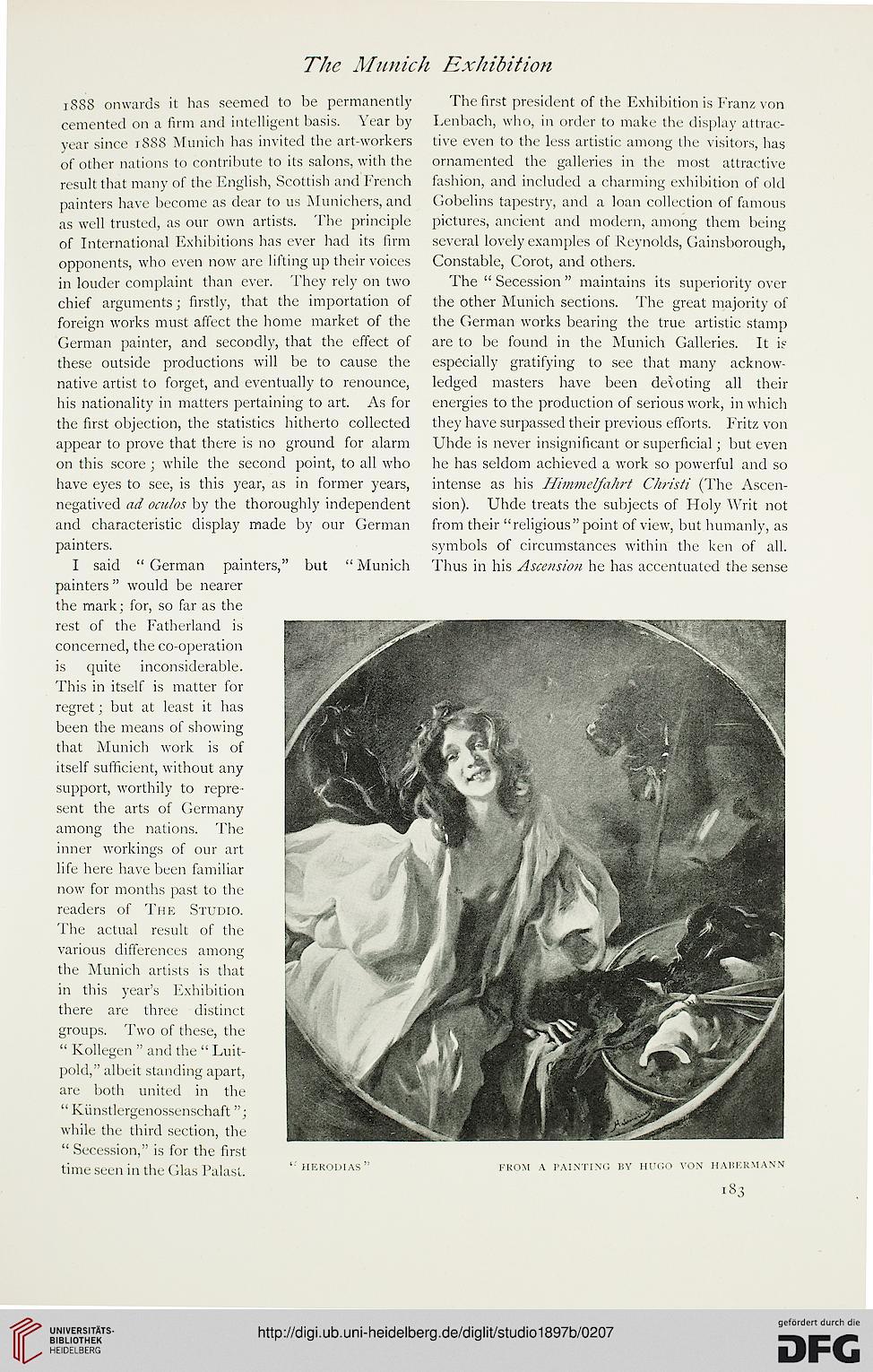 1888 onwards it has seemed to be permanently The first president of the Exhibition is Franz von
cemented on a firm and intelligent basis. Year by Lenbach, who, in order to make the display attrac-
year since r888 Munich has invited the art-workers tive even to the less artistic among the visitors, has
of other nations to contribute to its salons, with the ornamented the galleries in the most attractive
result that many of the English, Scottish and French fashion, and included a charming exhibition of old
painters have become as dear to us Munichers, and Gobelins tapestry, and a loan collection of famous
as well trusted, as our own artists. The principle pictures, ancient and modern, among them being
of International Exhibitions has ever had its firm several lovely examples of Reynolds, Gainsborough,
opponents, who even now are lifting up their voices Constable, Corot, and others.

in louder complaint than ever. They rely on two The " Secession " maintains its superiority over
chief arguments; firstly, that the importation of the other Munich sections. The great majority of
foreign works must affect the home market of the the German works bearing the true artistic stamp
German painter, and secondly, that the effect of are to be found in the Munich Galleries. It is
these outside productions will be to cause the especially gratifying to see that many acknow-
native artist to forget, and eventually to renounce, ledged masters have been devoting all their
his nationality in matters pertaining to art. As for energies to the production of serious work, in which
the first objection, the statistics hitherto collected they have surpassed their previous efforts. Fritz von
appear to prove that there is no ground for alarm Uhde is never insignificant or superficial; but even
on this score ; while the second point, to all who he has seldom achieved a work so powerful and so
have eyes to see, is this year, as in former years, intense as his Himmelfahrt Christi (The Ascen-
negatived ad oculos by the thoroughly independent sion). Uhde treats the subjects of Holy Writ not
and characteristic display made by our German from their "religious" point of view, but humanly, as
painters. symbols of circumstances within the ken of all.

I said " German painters," but " Munich Thus in his Ascensio?i he has accentuated the sense
painters " would be nearer
the mark; for, so far as the
rest of the Fatherland is
concerned, the co-operation
is quite inconsiderable.
This in itself is matter for
regret; but at least it has
been the means of showing
that Munich work is of
itself sufficient, without any
support, wrorthily to repre-
sent the arts of Germany
among the nations. The
inner workings of our art
life here have been familiar
now for months past to the
readers of The Studio.
The actual result of the
various differences among
the Munich artists is that
in this year's Exhibition
there are three distinct
groups. Two of these, the
" Kollegen " and the " Luit-
pold," albeit standing apart,
are both united in the
" Kiinstlergenossenschaft
while the third section, the
" Secession," is for the first