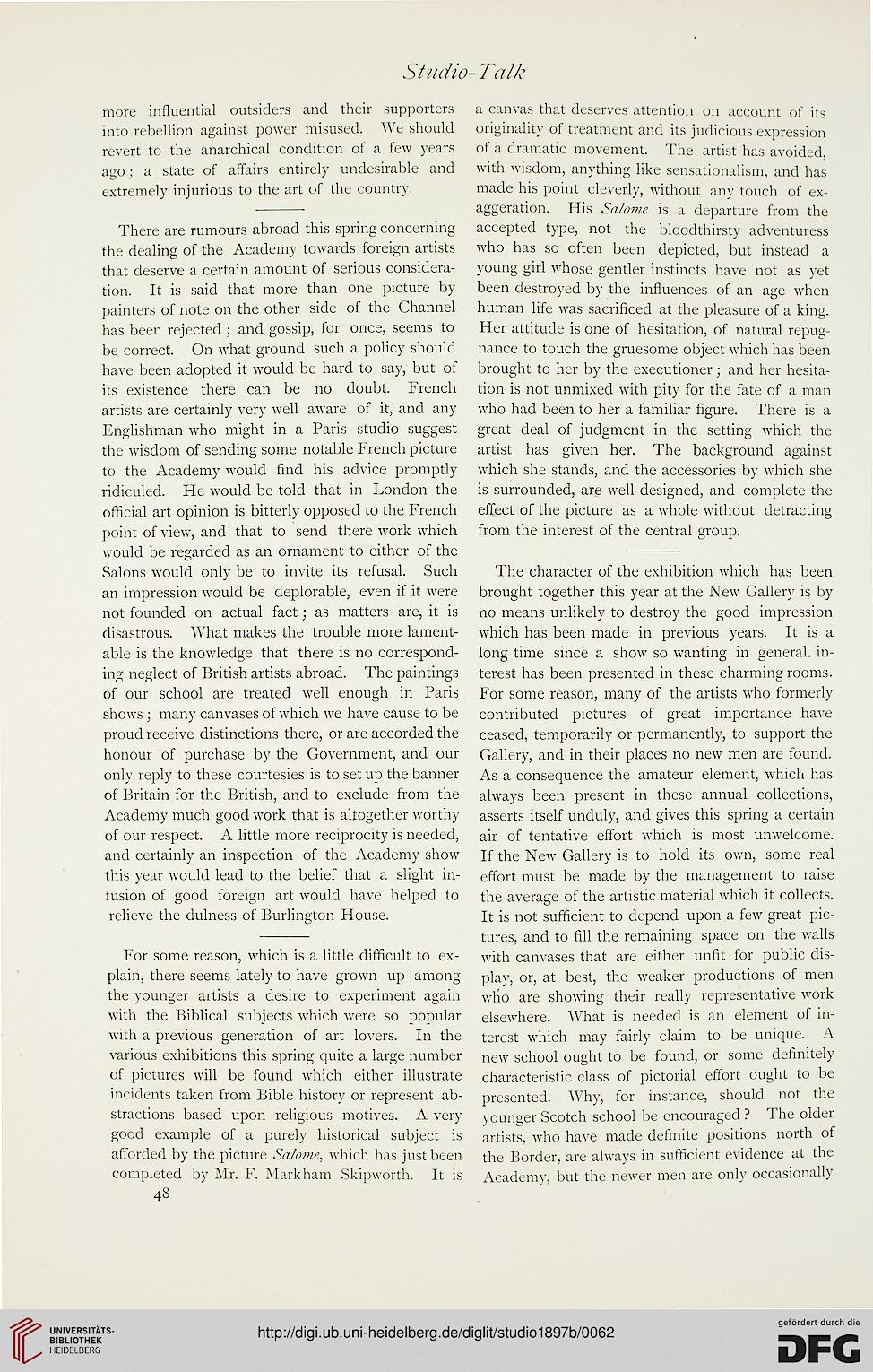 more influential outsiders and their supporters
into rebellion against power misused. We should
revert to the anarchical condition of a few years
ago; a state of affairs entirely undesirable and
extremely injurious to the art of the country,

There are rumours abroad this spring concerning
the dealing of the Academy towards foreign artists
that deserve a certain amount of serious considera-
tion. It is said that more than one picture by
painters of note on the other side of the Channel
has been rejected ; and gossip, for once, seems to
be correct. On what ground such a policy should
have been adopted it would be hard to say, but of
its existence there can be no doubt. French
artists are certainly very well aware of it, and any
Englishman who might in a Paris studio suggest
the wisdom of sending some notable French picture
to the Academy would find his advice promptly
ridiculed. He would be told that in London the
official art opinion is bitterly opposed to the French
point of view, and that to send there work which
would be regarded as an ornament to either of the
Salons would only be to invite its refusal. Such
an impression would be deplorable, even if it were
not founded on actual fact; as matters are, it is
disastrous. What makes the trouble more lament-
able is the knowledge that there is no correspond-
ing neglect of British artists abroad. The paintings
of our school are treated well enough in Paris
shows; many canvases of which we have cause to be
proud receive distinctions there, or are accorded the
honour of purchase by the Government, and our
only reply to these courtesies is to set up the banner
of Britain for the British, and to exclude from the
Academy much good work that is altogether worthy
of our respect. A little more reciprocity is needed,
and certainly an inspection of the Academy show
this year would lead to the belief that a slight in-
fusion of good foreign art would have helped to
relieve the dulness of Burlington House.

For some reason, which is a little difficult to ex-
plain, there seems lately to have grown up among
the younger artists a desire to experiment again
with the Biblical subjects which were so popular
with a previous generation of art lovers. In the
various exhibitions this spring quite a large number
of pictures will be found which either illustrate
incidents taken from Bible history or represent ab-
stractions based upon religious motives. A very
good example of a purely historical subject is
afforded by the picture Salome, which has just been
completed by Mr. F. Markham Skipworth. It is
48

a canvas that deserves attention on account of its
originality of treatment and its judicious expression
of a dramatic movement. The artist has avoided,
with wisdom, anything like sensationalism, and has
made his point cleverly, without any touch of ex-
aggeration. His Salome is a departure from the
accepted type, not the bloodthirsty adventuress
who has so often been depicted, but instead a
young girl whose gentler instincts have not as yet
been destroyed by the influences of an age when
human life was sacrificed at the pleasure of a king.
Her attitude is one of hesitation, of natural repug-
nance to touch the gruesome object which has been
brought to her by the executioner; and her hesita-
tion is not unmixed with pity for the fate of a man
who had been to her a familiar figure. There is a
great deal of judgment in the setting which the
artist has given her. The background against
which she stands, and the accessories by which she
is surrounded, are well designed, and complete the
effect of the picture as a whole without detracting
from the interest of the central group.

The character of the exhibition which has been
brought together this year at the New Gallery is by
no means unlikely to destroy the good impression
which has been made in previous years. It is a
long time since a show so wanting in general, in-
terest has been presented in these charming rooms.
For some reason, many of the artists who formerly
contributed pictures of great importance have
ceased, temporarily or permanently, to support the
Gallery, and in their places no new men are found.
As a consequence the amateur element, which has
always been present in these annual collections,
asserts itself unduly, and gives this spring a certain
air of tentative effort which is most unwelcome.
If the New Gallery is to hold its own, some real
effort must be made by the management to raise
the average of the artistic material which it collects.
It is not sufficient to depend upon a few great pic-
tures, and to fill the remaining space on the walls
with canvases that are either unfit for public dis-
play, or, at best, the weaker productions of men
wtio are showing their really representative work
elsewhere. What is needed is an element of in-
terest which may fairly claim to be unique. A
new school ought to be found, or some definitely
characteristic class of pictorial effort ought to be
presented. Why, for instance, should not the
younger Scotch school be encouraged ? The older
artists, who have made definite positions north of
the Border, are always in sufficient evidence at the
Academy, but the newer men are only occasionally