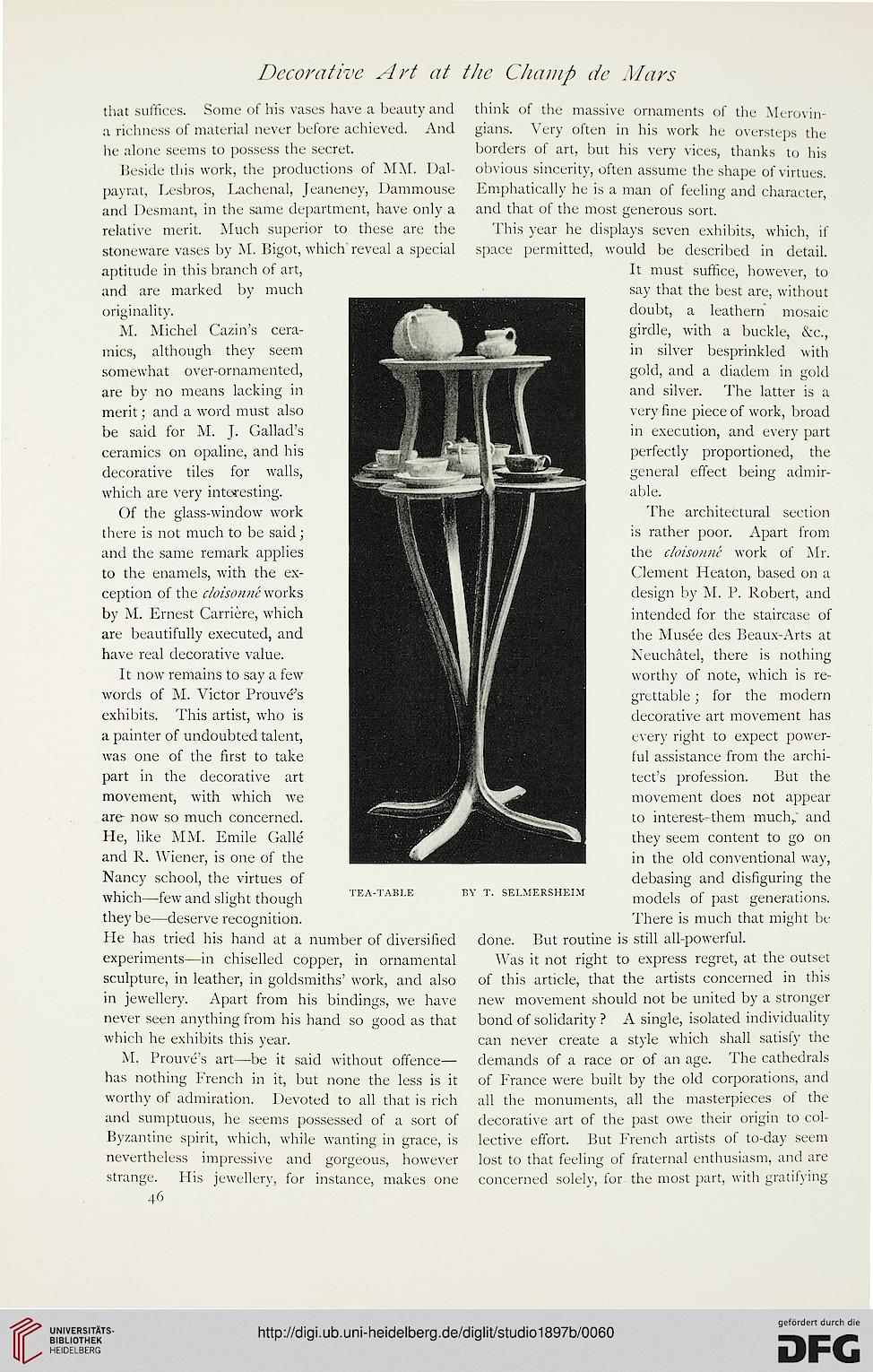 that suffices. Some of his vases have a beauty and think of the massive ornaments of the Merovin-

a richness of material never before achieved. And gians. Very often in his work he oversteps the

he alone seems to possess the secret. borders of art, but his very vices, thanks to his

beside this work, the productions of MAI. Dal- obvious sincerity, often assume the shape of virtues,

and 1 )esmant5 in the same department, have only a and that of the most generous sort,

relative merit. Much superior to these are the This year he displays seven exhibits, which, if

stoneware vases by M. Bigot, which reveal a special space permitted, would be described in detail,

aptitude in this branch of art, It must suffice, however, to

and are marked by much • say that the best are, without

to the enamels, with the ex- Wkvi m mm mm m dement Heaton, based on a

ception of the cloisonne works HUH WSmfm design by M. P. Robert, and

by M. Ernest Carriere, which Hm If M intended for the staircase of
are beautifully executed, and H\v ww m tnc Musee des Beaux-Arts at
have real decorative value. Hn If a Neuchatel, there is nothing
It now remains to say a few ■/fl worthy of note, which is re-
words of M. Victor Prouve's HwFfl crettable ; for the modern
exhibits. This artist, who is m m decorative art movement has
a painter of undoubted talent, every right to expect power-
was one of the first to take ful assistance from the archi-
part in the decorative art Hi ■ tect's profession. But the
movement, with which we W JL_ >mm movement does not appear
are now so much concerned. ■ Sr M m^L, ^ --~-~ to interest-them much, and
He, like MM. Emile Galle ^r \mm tn-eY seem content to go on

Nancy school, the virtues of debasing and disfiguring the

they be—deserve recognition. There is much that might be
He has tried his hand at a number of diversified done. But routine is still all-powerful,
experiments—in chiselled copper, in ornamental Was it not right to express regret, at the outset
sculpture, in leather, in goldsmiths' work, and also of this article, that the artists concerned in this
in jewellery. Apart from his bindings, wTe have new movement should not be united by a stronger
never seen anything from his hand so good as that bond of solidarity ? A single, isolated individuality
which he exhibits this year. can never create a style which shall satisfy the
M. Prouve's art—be it said without offence— demands of a race or of an age. The cathedrals
has nothing French in it, but none the less is it of France were built by the old corporations, and
worthy of admiration. Devoted to all that is rich all the monuments, all the masterpieces of the
and sumptuous, he seems possessed of a sort of decorative art of the past owe their origin to col-
Byzantine spirit, which, while wanting in grace, is lective effort. But French artists of to-day seem
nevertheless impressive and gorgeous, however lost to that feeling of fraternal enthusiasm, and are
strange. His jewellery, for instance, makes one concerned solely, for the most part, with gratifying
46