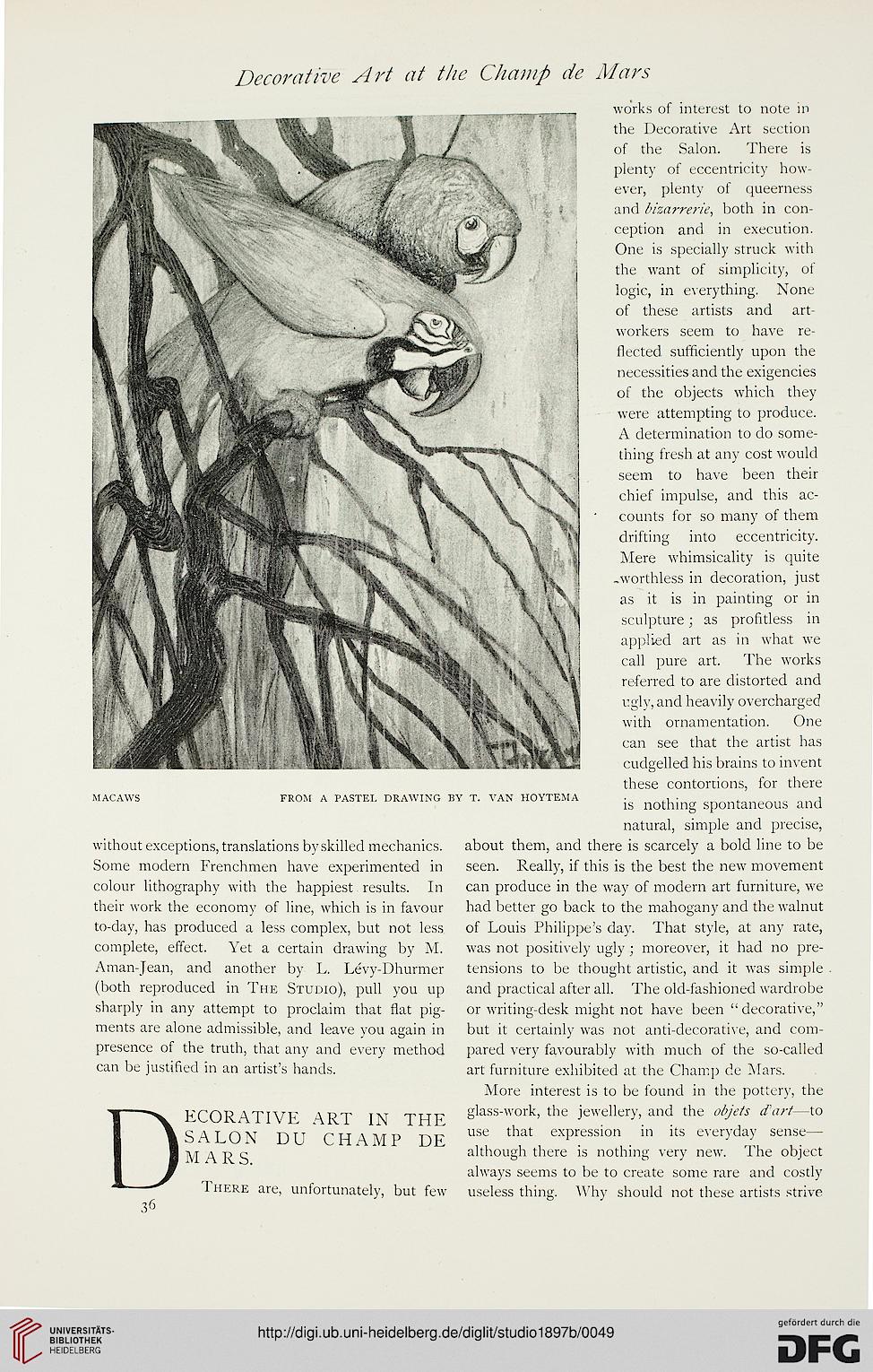 works of interest to note in
the Decorative Art section
of the Salon. There is
plenty of eccentricity how-
ever, plenty of queerness
and bizarrerie, both in con-
ception and in execution.
One is specially struck with
the want of simplicity, of
logic, in everything. None
of these artists and art-
workers seem to have re-
flected sufficiently upon the
necessities and the exigencies
of the objects which they
were attempting to produce.
A determination to do some-
thing fresh at any cost would
seem to have been their
chief impulse, and this ac-
counts for so many of them
drifting into eccentricity.
Mere whimsicality is quite
-worthless in decoration, just
as it is in painting or in
sculpture; as profitless in
applied art as in what we
call pure art. The works
referred to are distorted and
ugly, and heavily overcharged
with ornamentation. One
can see that the artist has
cudgelled his brains to invent
these contortions, for there

MACAW'S FROM A PASTEL DRAWING BY T. VAN HOYTEMA . i

is nothing spontaneous and
natural, simple and precise,

without exceptions, translations by skilled mechanics. about them, and there is scarcely a bold line to be
Some modern Frenchmen have experimented in seen. Really, if this is the best the new movement
colour lithography with the happiest results. In can produce in the way of modern art furniture, we
their work the economy of line, which is in favour had better go back to the mahogany and the walnut
to-day, has produced a less complex, but not less of Louis Philippe's day. That style, at any rate,
complete, effect. Yet a certain drawing by M. was not positively ugly ; moreover, it had no pre-
Aman-Jean, and another by L. Levy-Dhurmer tensions to be thought artistic, and it was simple
(both reproduced in The Studio), pull you up and practical after all. The old-fashioned wardrobe
sharply in any attempt to proclaim that flat pig- or writing-desk might not have been "decorative,"
ments are alone admissible, and leave you again in but it certainly was not anti-decorative, and corn-
presence of the truth, that any and every method pared very favourably with much of the so-called
can be justified in an artist's hands. art furniture exhibited at the Champ de Mars.

More interest is to be found in the pottery, the
ECORATIVE ART IN THE g^ass_work, the jewellery, and the objets d'art—to
SALON DU CHAMP DE USe exPressi°n m its everyday sense—

MARS although there is nothing very new. The object

always seems to be to create some rare and costly
There are, unfortunately, but few useless thing. Why should not these artists strive