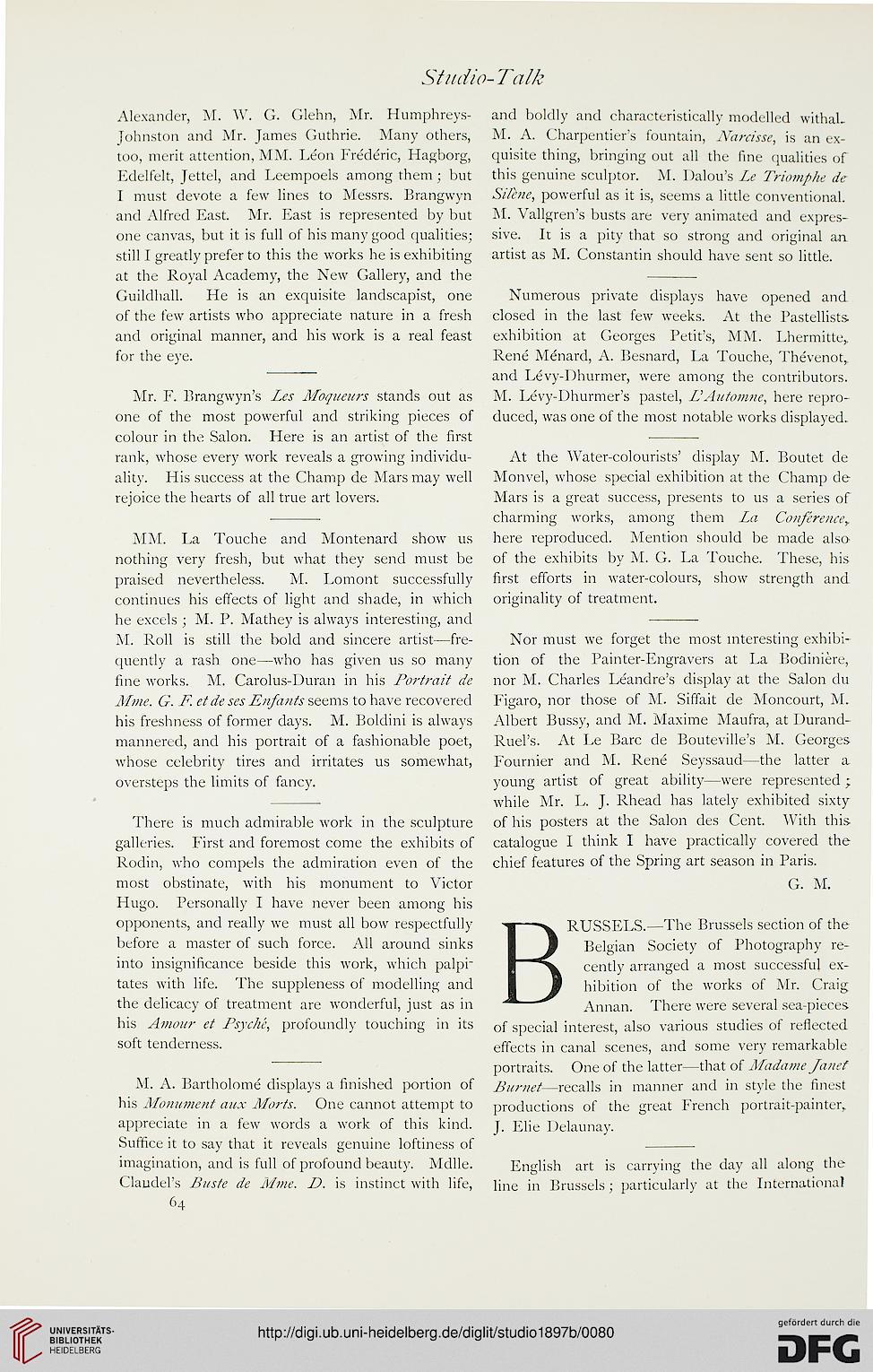 Alexander, M. W. G. Glehn, Mr. Humphreys-
Johnston and Mr. James Guthrie. Many others,
too, merit attention, MM. Leon Frederic, Hagborg,
Edelfelt, Jettel, and Leempoels among them ; but
I must devote a few lines to Messrs. Brangwyn
and Alfred East. Mr. East is represented by but
one canvas, but it is full of his many good qualities;
still I greatly prefer to this the works he is exhibiting
at the Royal Academy, the New Gallery, and the
Guildhall. He is an exquisite landscapist, one
of the few artists who appreciate nature in a fresh
and original manner, and his work is a real feast
for the eye.

Mr. F. Brangwyn's Pes Moqueurs stands out as
one of the most powerful and striking pieces of
colour in the Salon. Here is an artist of the first
rank, whose every work reveals a growing individu-
ality. His success at the Champ de Mars may well
rejoice the hearts of all true art lovers.

MM. La Touche and Montenard show us
nothing very fresh, but what they send must be
praised nevertheless. M. Lomont successfully
continues his effects of light and shade, in which
he excels ; M. P. Mathey is always interesting, and
M. Roll is still the bold and sincere artist—fre-
quently a rash one—who has given us so many
fine works. M. Carolus-Duran in his Portrait de
Mme. G. F. et de ses Pnfants seems to have recovered
his freshness of former days. M. Boldini is always
mannered, and his portrait of a fashionable poet,
whose celebrity tires and irritates us somewhat,
oversteps the limits of fancy.

There is much admirable work in the sculpture
galleries. First and foremost come the exhibits of
Rodin, who compels the admiration even of the
most obstinate, with his monument to Victor
Hugo. Personally I have never been among his
opponents, and really we must all bow respectfully
before a master of such force. All around sinks
into insignificance beside this work, which palpi"
tates with life. The suppleness of modelling and
the delicacy of treatment are wonderful, just as in
his Amour et Psyche, profoundly touching in its
soft tenderness.

M. A. Bartholome displays a finished portion of
his Monument aux Morts. One cannot attempt to
appreciate in a few words a work of this kind.
Suffice it to say that it reveals genuine loftiness of
imagination, and is full of profound beauty. Mdlle.
Claudel's Paste de Mme. D. is instinct with life,

and boldly and characteristically modelled withal.
M. A. Charpentier's fountain, ATarc/sse, is an ex-
quisite thing, bringing out all the fine qualities of
this genuine sculptor. M. Dalou's Le Triomphe de
SiPcne, powerful as it is, seems a little conventional.
M. Vallgren's busts are very animated and expres-
sive. It is a pity that so strong and original an
artist as M. Constantin should have sent so little.

Numerous private displays have opened and
closed in the last few weeks. At the Pastellists
exhibition at Georges Petit's, MM. Lhermitte,
Rene Menard, A. Besnard, La Touche, Thevenot,
and Levy-Dhurmer, were among the contributors.
M. Levy-Dhurmer's pastel, PAutomne, here repro-
duced, was one of the most notable works displayed.

At the Water-colourists' display M. Boutet de
Monvel, whose special exhibition at the Champ de
Mars is a great success, presents to us a series of
charming works, among them La Conferencey
here reproduced. Mention should be made also
of the exhibits by M. G. La Touche. These, his
first efforts in water-colours, show strength and
originality of treatment.

Nor must we forget the most interesting exhibi-
tion of the Painter-Engravers at La Bodiniere,
nor M. Charles Leandre's display at the Salon du
Figaro, nor those of M. Siffait de Moncourt, M.
Albert Bussy, and M. Maxime Maufra, at Durand-
Ruel's. At Le Bare de Bouteville's M. Georges
Fournier and M. Rene Seyssaud—the latter a
young artist of great ability—were represented ;
while Mr. L. J. Rhead has lately exhibited sixty
of his posters at the Salon des Cent. With this
catalogue I think I have practically covered the
chief features of the Spring art season in Paris.

BRUSSELS.—The Brussels section of the
Belgian Society of Photography re-
cently arranged a most successful ex-
hibition of the works of Mr. Craig
Annan. There were several sea-pieces
of special interest, also various studies of reflected
effects in canal scenes, and some very remarkable
portraits. One of the latter—that of Madame Janet
Purnet—recalls in manner and in style the finest
productions of the great French portrait-painter.
J. Elie Delaunay.

English art is carrying the day all along the
line in Brussels ; particularly at the International