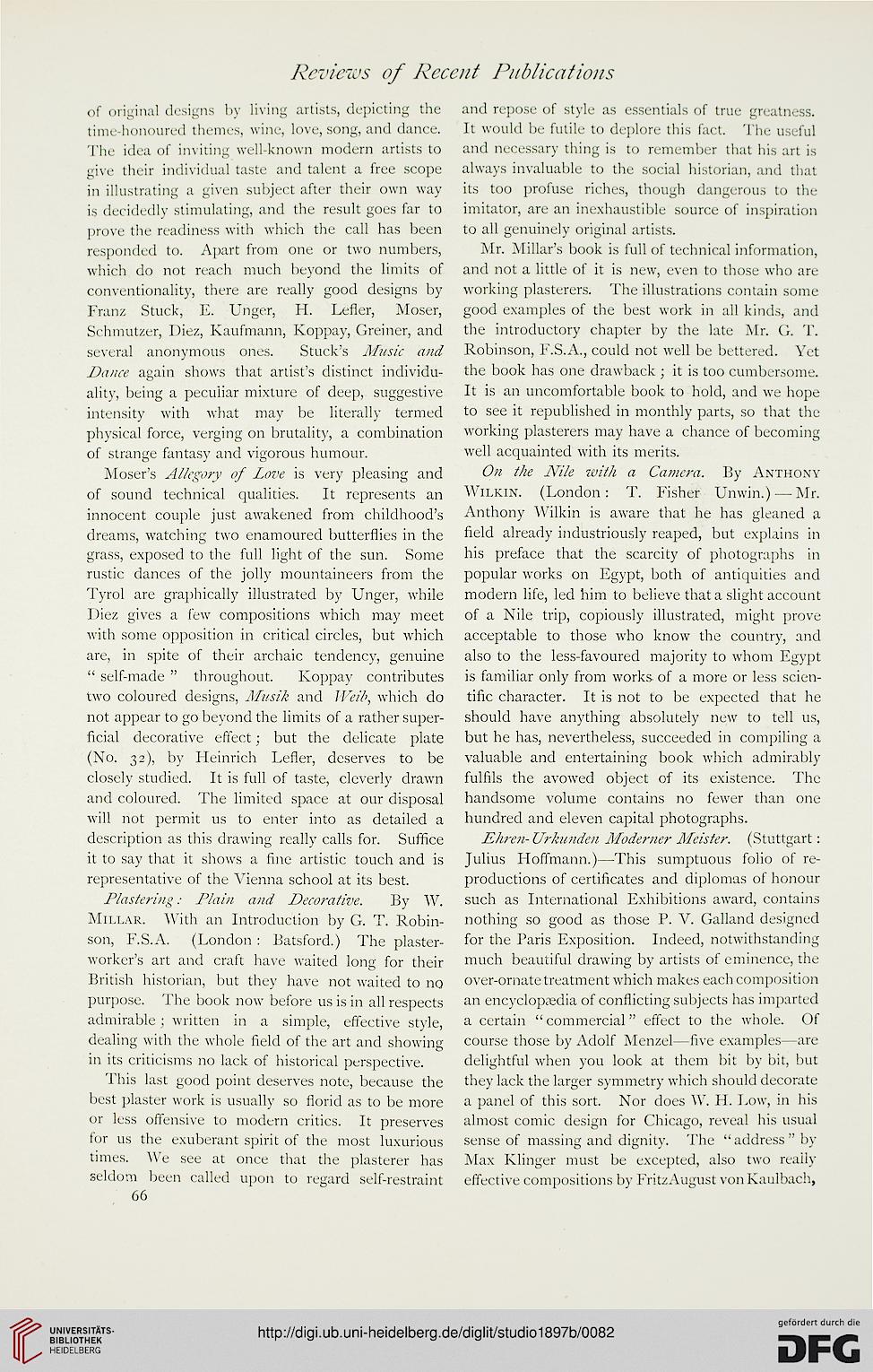 of original designs by living artists, depicting the
time-honoured themes, wine, love, song, and dance.
The idea of inviting well-known modem artists to
give their individual taste and talent a free scope
in illustrating a given subject after their own way
is decidedly stimulating, and the result goes far to
prove the readiness with which the call has been
responded to. Apart from one or two numbers,
which do not reach much beyond the limits of
conventionality, there are really good designs by
Franz Stuck, E. Unger, H. Lefler, Moser,
Schmutzer, Diez, Kaufmann, Koppay, Greiner, and
several anonymous ones. Stuck's Music and
Dance again shows that artist's distinct individu-
ality, being a peculiar mixture of deep, suggestive
intensity with what may be literally termed
physical force, verging on brutality, a combination
of strange fantasy and vigorous humour.

Moser's Allegory of Love is very pleasing and
of sound technical qualities. It represents an
innocent couple just awakened from childhood's
dreams, watching two enamoured butterflies in the
grass, exposed to the full light of the sun. Some
rustic dances of the jolly mountaineers from the
Tyrol are graphically illustrated by Unger, while
] )iez gives a few compositions which may meet
with some opposition in critical circles, but which
are, in spite of their archaic tendency, genuine
" self-made " throughout. Koppay contributes
two coloured designs, Musik and JVeifi, which do
not appear to go beyond the limits of a rather super-
ficial decorative effect; but the delicate plate
(No. 32), by Heinrich Lefler, deserves to be
closely studied. It is full of taste, cleverly drawrn
and coloured. The limited space at our disposal
will not permit us to enter into as detailed a
description as this drawing really calls for. Suffice
it to say that it shows a fine artistic touch and is
representative of the Arienna school at its best.

Plastering: Plain and Decorative. By W.
Millar. With an Introduction by G. T. Robin-
son, F.S.A. (London : Batsford.) The plaster-
worker's art and craft have waited long for their
British historian, but they have not waited to no
purpose. The book now before us is in all respects
admirable ; written in a simple, effective style,
dealing with the whole field of the art and showing
in its criticisms no lack of historical perspective.

This last good point deserves note, because the
best plaster work is usually so florid as to be more
or less offensive to modern critics. It preserves
tor us the exuberant spirit of the most luxurious
times. We see at once that the plasterer has
Seldom been called upon to regard self-restraint
66

and repose of style as essentials of true greatness.
It would be futile to deplore this fact. The useful
and necessary thing is to remember that his art is
always invaluable to the social historian, and that
its too profuse riches, though dangerous to the
imitator, are an inexhaustible source of inspiration
to all genuinely original artists.

Mr. Millar's book is full of technical information,
and not a little of it is new, even to those who are
working plasterers. The illustrations contain some
good examples of the best work in all kinds, and
the introductory chapter by the late Mr. G. T.
Robinson, F.S.A., could not well be bettered. Vet
the book has one drawback ; it is too cumbersome.
It is an uncomfortable book to hold, and we hope
to see it republished in monthly parts, so that the
working plasterers may have a chance of becoming
well acquainted with its merits.

On the Nile wit/i a Camera. By Anthoxv
Wilkin. (London: T. Fisher Unwin.) — Mr.
Anthony Wilkin is aware that he has gleaned a
field already industriously reaped, but explains in
his preface that the scarcity of photographs in
popular works on Egypt, both of antiquities and
modern life, led him to believe that a slight account
of a Nile trip, copiously illustrated, might prove
acceptable to those who know the country, and
also to the less-favoured majority to whom Egypt
is familiar only from works of a more or less scien-
tific character. It is not to be expected that he
should have anything absolutely new to tell us,
but he has, nevertheless, succeeded in compiling a
valuable and entertaining book which admirably
fulfils the avowred object of its existence. The
handsome volume contains no fewer than one
hundred and eleven capital photographs.

Ehre?i- Urkunden Moderner Mcister. (Stuttgart :
Julius Hoffmann.)—This sumptuous folio of re-
productions of certificates and diplomas of honour
such as International Exhibitions award, contains
nothing so good as those P. V. Galland designed
for the Paris Exposition. Indeed, notwithstanding
much beautiful drawing by artists of eminence, the
over-ornate treatment which makes each composition
an encyclopaedia of conflicting subjects has imparted
a certain "commercial" effect to the whole. Of
course those by Adolf Menzel—five examples—are
delightful when you look at them bit by bit, but
they lack the larger symmetry which should decorate
a panel of this sort. Nor does W. H. Low, in his
almost comic design for Chicago, reveal his usual
sense of massing and dignity. The "address"by
Max Klinger must be excepted, also two really
effective compositions by FritzAugust von Kaulbach,