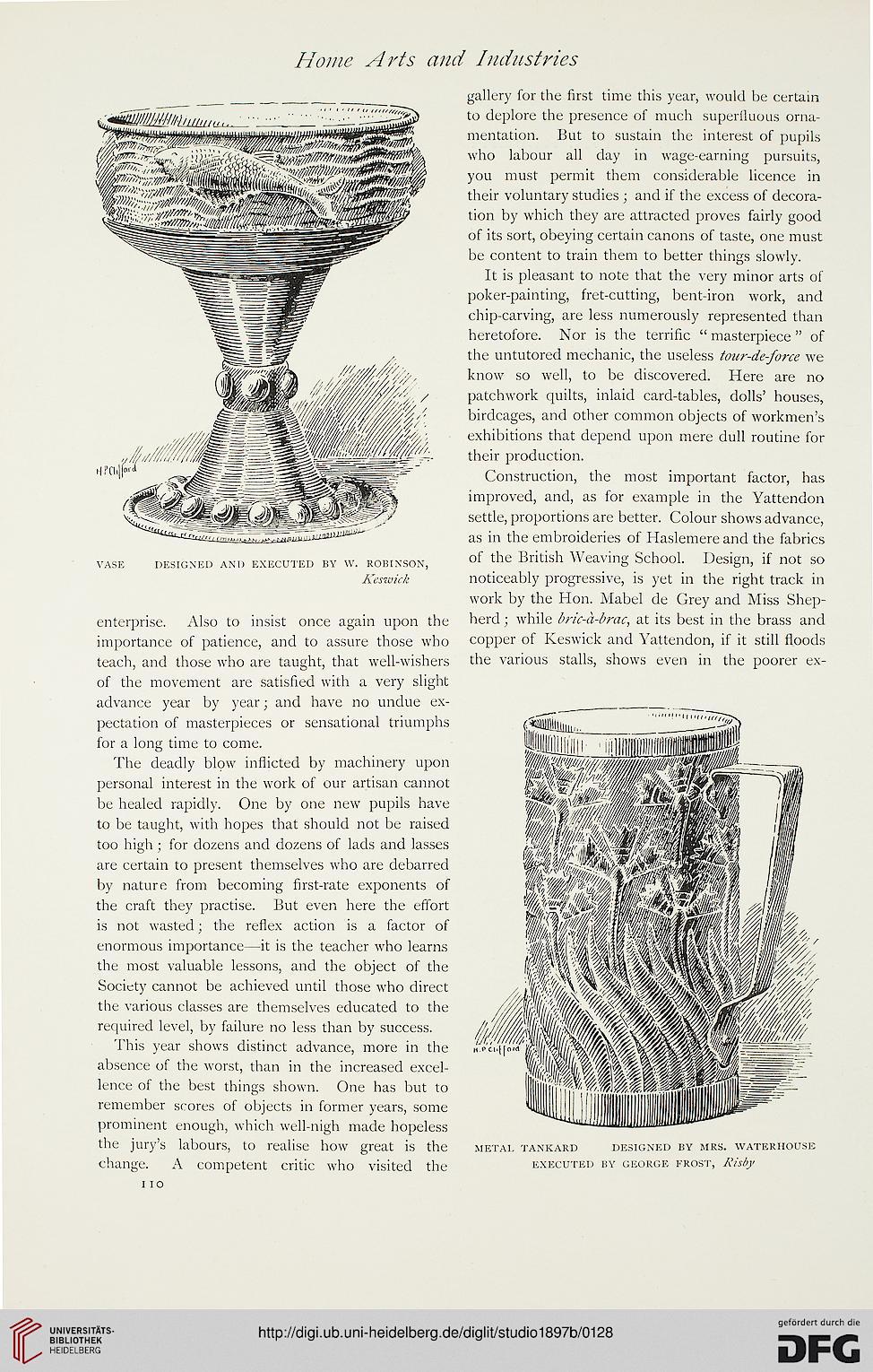 enterprise. Also to insist once again upon the
importance of patience, and to assure those who
teach, and those who are taught, that well-wishers
of the movement are satisfied with a very slight
advance year by year; and have no undue ex-
pectation of masterpieces or sensational triumphs
for a long time to come.

The deadly blow inflicted by machinery upon
personal interest in the work of our artisan cannot
be healed rapidly. One by one new pupils have
to be taught, with hopes that should not be raised
too high ; for dozens and dozens of lads and lasses
are certain to present themselves who are debarred
by nature from becoming first-rate exponents of
the craft they practise. But even here the effort
is not wasted; the reflex action is a factor of
enormous importance—it is the teacher who learns
the most valuable lessons, and the object of the
Society cannot be achieved until those who direct
the various classes are themselves educated to the
required level, by failure no less than by success.

This year shows distinct advance, more in the
absence of the worst, than in the increased excel-
lence of the best things shown. One has but to
remember scores of objects in former years, some
prominent enough, which well-nigh made hopeless
the jury's labours, to realise how great is the
change. A competent critic who visited the
110

gallery for the first time this year, would be certain
to deplore the presence of much superfluous orna-
mentation. But to sustain the interest of pupils
who labour all day in wage-earning pursuits,
you must permit them considerable licence in
their voluntary studies ; and if the excess of decora-
tion by which they are attracted proves fairly good
of its sort, obeying certain canons of taste, one must
be content to train them to better things slowly.

It is pleasant to note that the very minor arts of
poker-painting, fret-cutting, bent-iron work, and
chip-carving, are less numerously represented than
heretofore. Nor is the terrific " masterpiece " of
the untutored mechanic, the useless tour-de-force we
know so well, to be discovered. Here are no
patchwork quilts, inlaid card-tables, dolls' houses,
birdcages, and other common objects of workmen's
exhibitions that depend upon mere dull routine for
their production.

Construction, the most important factor, has
improved, and, as for example in the Yattendon
settle, proportions are better. Colour shows advance,
as in the embroideries of Haslemere and the fabrics
of the British Weaving School. Design, if not so
noticeably progressive, is yet in the right track in
work by the Hon. Mabel de Grey and Miss Shep-
herd ; while bric-a-brac, at its best in the brass and
copper of Keswick and Yattendon, if it still floods
the various stalls, shows even in the poorer ex-