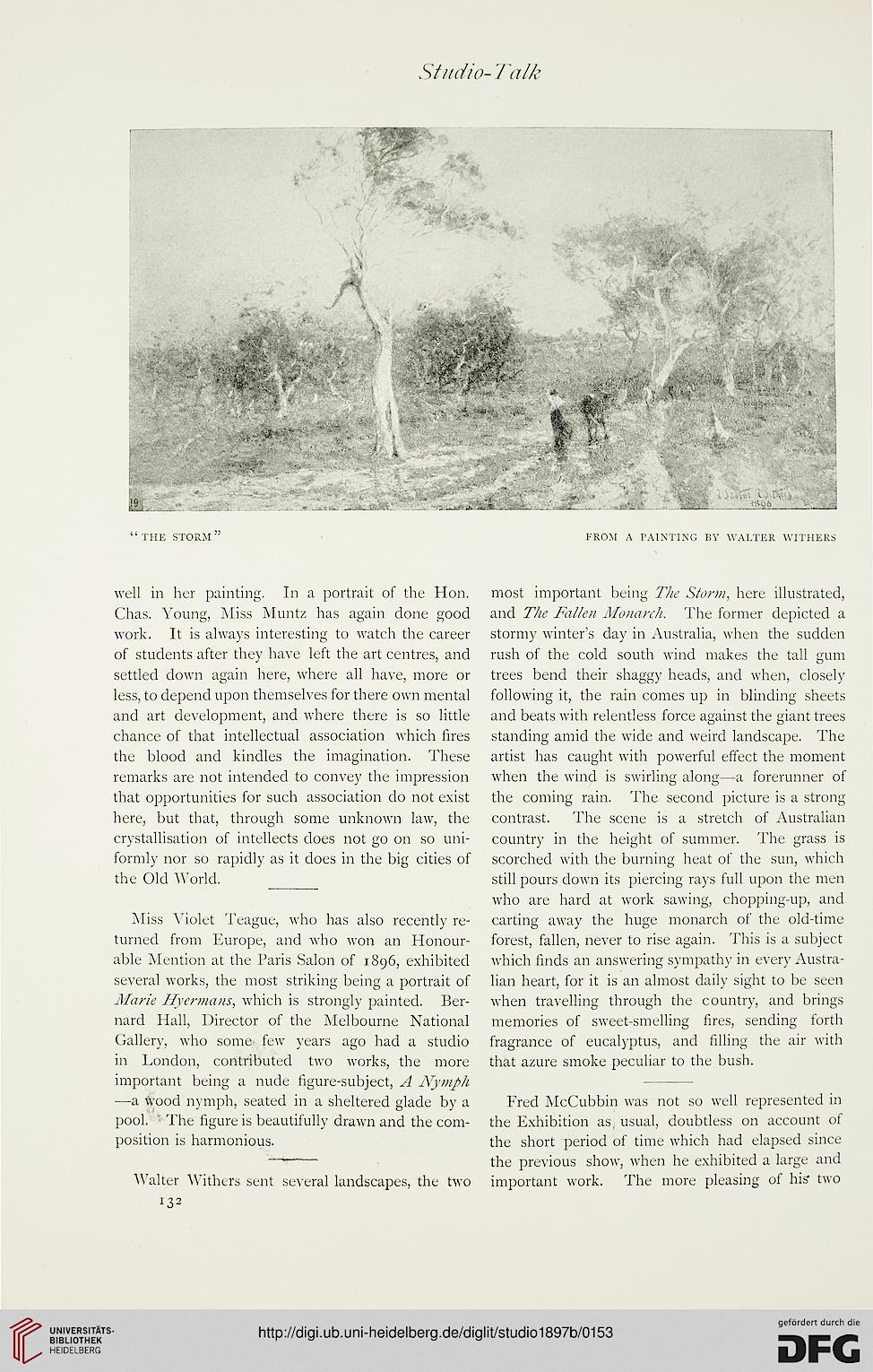 well in her painting. In a portrait of the Hon.
Chas. Young, Miss Muntz has again done good
work. It is always interesting to watch the career
of students after they have left the art centres, and
settled down again here, where all have, more or
less, to depend upon themselves for there own mental
and art development, and where there is so little
chance of that intellectual association which fires
the blood and kindles the imagination. These
remarks are not intended to convey the impression
that opportunities for such association do not exist
here, but that, through some unknown law, the
crystallisation of intellects does not go on so uni-
formly nor so rapidly as it does in the big cities of
the Old World.

Miss Violet Teague, who has also recently re-
turned from Europe, and who won an Honour-
able Mention at the Paris Salon of 1896, exhibited
several works, the most striking being a portrait of
Marie Hyermans, which is strongly painted. Ber-
nard Hall, Director of the Melbourne National
Gallery, who some few years ago had a studio
in London, contributed two works, the more
important being a nude figure-subject, A Nymph
—a wood nymph, seated in a sheltered glade by a
pool. * The figure is beautifully drawn and the com-
position is harmonious.

most important being The Storm, here illustrated,
and The Fallen Monarch. The former depicted a
stormy winter's day in Australia, when the sudden
rush of the cold south wind makes the tall gum
trees bend their shaggy heads, and when, closely
following it, the rain comes up in blinding sheets
and beats with relentless force against the giant trees
standing amid the wide and weird landscape. The
artist has caught with powerful effect the moment
when the wind is swirling along—a forerunner of
the coming rain. The second picture is a strong
contrast. The scene is a stretch of Australian
country in the height of summer. The grass is
scorched with the burning heat of the sun, which
still pours down its piercing rays full upon the men
who are hard at work sawing, chopping-up, and
carting away the huge monarch of the old-time
forest, fallen, never to rise again. This is a subject
which finds an answering sympathy in every Austra-
lian heart, for it is an almost daily sight to be seen
when travelling through the country, and brings
memories of sweet-smelling fires, sending forth
fragrance of eucalyptus, and filling the air with
that azure smoke peculiar to the bush.

Fred McCubbin was not so well represented in
the Exhibition as. usual, doubtless on account of
the short period of time which had elapsed since
the previous show, when he exhibited a large and
important work. The more pleasing of his* two