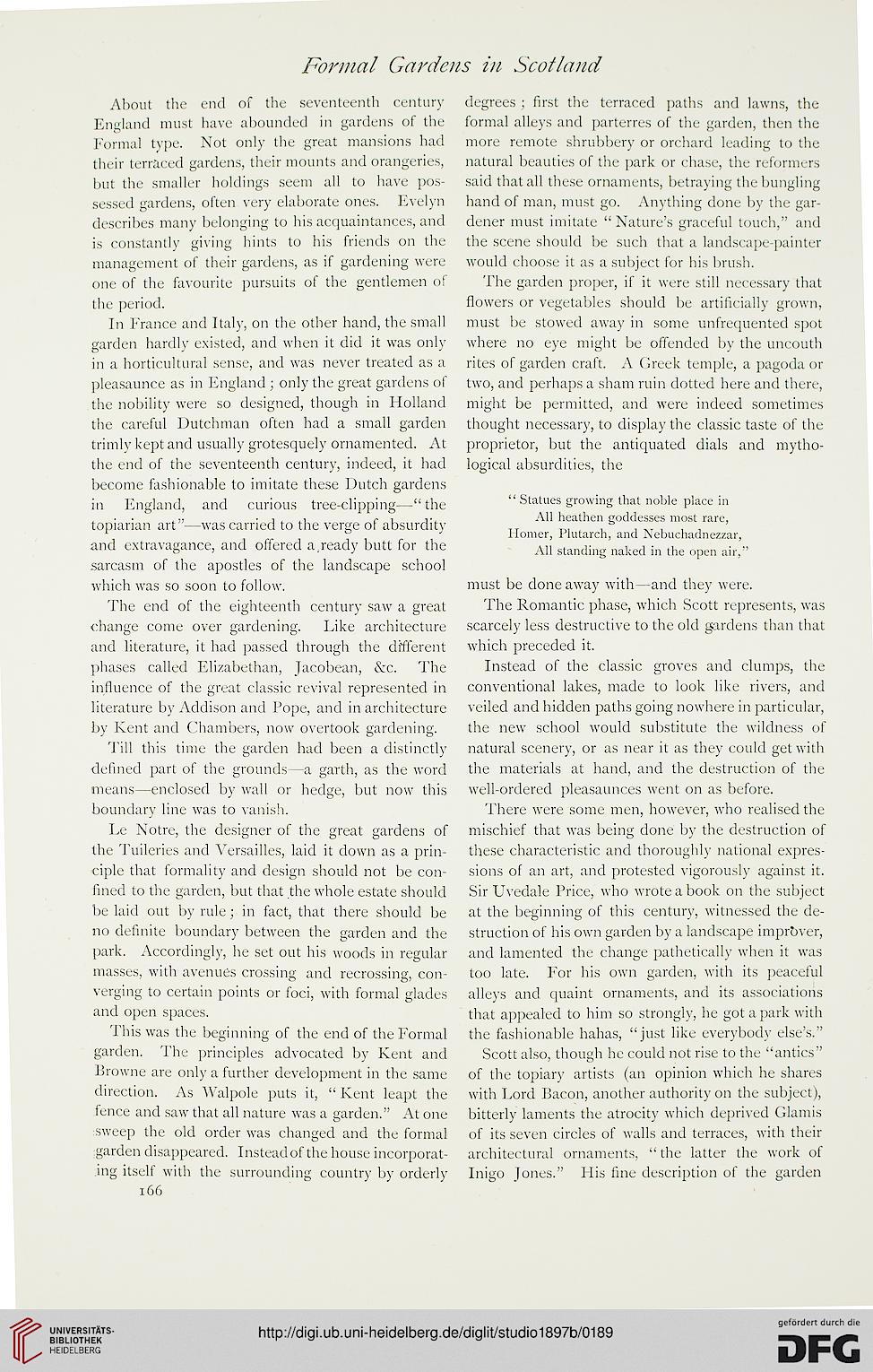 About the end of the seventeenth century
England must have abounded in gardens of the
Formal type. Not only the great mansions had
their terraced gardens, their mounts and orangeries,
but the smaller holdings seem all to have pos-
sessed gardens, often very elaborate ones. Evelyn
describes many belonging to his acquaintances, and
is constantly giving hints to his friends on the
management of their gardens, as if gardening were
one of the favourite pursuits of the gentlemen of
the period.

In France and Italy, on the other hand, the small
garden hardly existed, and when it did it was only
in a horticultural sense, and was never treated as a
pleasaunce as in England ; only the great gardens of
the nobility were so designed, though in Holland
the careful Dutchman often had a small garden
trimly kept and usually grotesquely ornamented. At
the end of the seventeenth century, indeed, it had
become fashionable to imitate these Dutch gardens
in England, and curious tree-clipping—"the
topiarian art"—was carried to the verge of absurdity
and extravagance, and offered a;ready butt for the
sarcasm of the apostles of the landscape school
which was so soon to follow.

The end of the eighteenth century saw a great
change come over gardening. Like architecture
and literature, it had passed through the different
phases called Elizabethan, Jacobean, &c. The
influence of the great classic revival represented in
literature by Addison and Pope, and in architecture
by Kent and Chambers, now overtook gardening.

Till this time the garden had been a distinctly
defined part of the grounds—a garth, as the word
means—enclosed by wall or hedge, but now this
boundary line was to vanish.

Le Notre, the designer of the great gardens of
the Tuileries and Versailles, laid it down as a prin-
ciple that formality and design should not be con-
fined to the garden, but that the whole estate should
be laid out by rule; in fact, that there should be
no definite boundary between the garden and the
park. Accordingly, he set out his woods in regular
masses, with avenues crossing and recrossing, con-
verging to certain points or foci, with formal glades
and open spaces.

This was the beginning of the end of the Formal
garden. The principles advocated by Kent and
Browne are only a further development in the same
direction. As Walpole puts it, " Kent leapt the
fence and saw that all nature was a garden." At one
sweep the old order was changed and the formal
garden disappeared. Instead of the house incorporat-
ing itself with the surrounding country by orderly
166

degrees ; first the terraced paths and lawns, the
formal alleys and parterres of the garden, then the
more remote shrubbery or orchard leading to the
natural beauties of the park or chase, the reformers
said that all these ornaments, betraying the bungling
hand of man, must go. Anything done by the- gar-
dener must imitate " Nature's graceful touch," and
the scene should be such that a landscape-painter
would choose it as a subject for his brush.

The garden proper, if it were still necessary that
flowers or vegetables should be artificially grown,
must be stowed away in some unfrequented spot
where no eye might be offended by the uncouth
rites of garden craft. A Greek temple, a pagoda or
two, and perhaps a sham ruin dotted here and there,
might be permitted, and were indeed sometimes
thought necessary, to display the classic taste of the
proprietor, but the antiquated dials and mytho-
logical absurdities, the

" Statues growing that noble place in

All heathen goddesses most rare,
Homer, Plutarch, and Nebuchadnezzar,

All standing naked in the open air,"

must be done away with—and they were.

The Romantic phase, which Scott represents, was
scarcely less destructive to the old gardens than that
which preceded it.

Instead of the classic groves and clumps, the
conventional lakes, made to look like rivers, and
veiled and hidden paths going nowhere in particular,
the new school would substitute the wildness of
natural scenery, or as near it as they could get with
the materials at hand, and the destruction of the
well-ordered pleasaunces went on as before.

There were some men, however, who realised the
mischief that was being done by the destruction of
these characteristic and thoroughly national expres-
sions of an art, and protested vigorously against it.
Sir Uvedale Price, who wrote a book on the subject
at the beginning of this century, witnessed the de-
struction of his own garden by a landscape improver,
and lamented the change pathetically when it was
too late. For his own garden, with its peaceful
alleys and quaint ornaments, and its associations
that appealed to him so strongly, he got a park with
the fashionable hahas, "just like everybody else's."

Scott also, though he could not rise to the "antics"
of the topiary artists (an opinion which he shares
with Lord Bacon, another authority on the subject),
bitterly laments the atrocity which deprived Glamis
of its seven circles of walls and terraces, with their
architectural ornaments, tl the latter the work of
Inigo Jones." His fine description of the garden