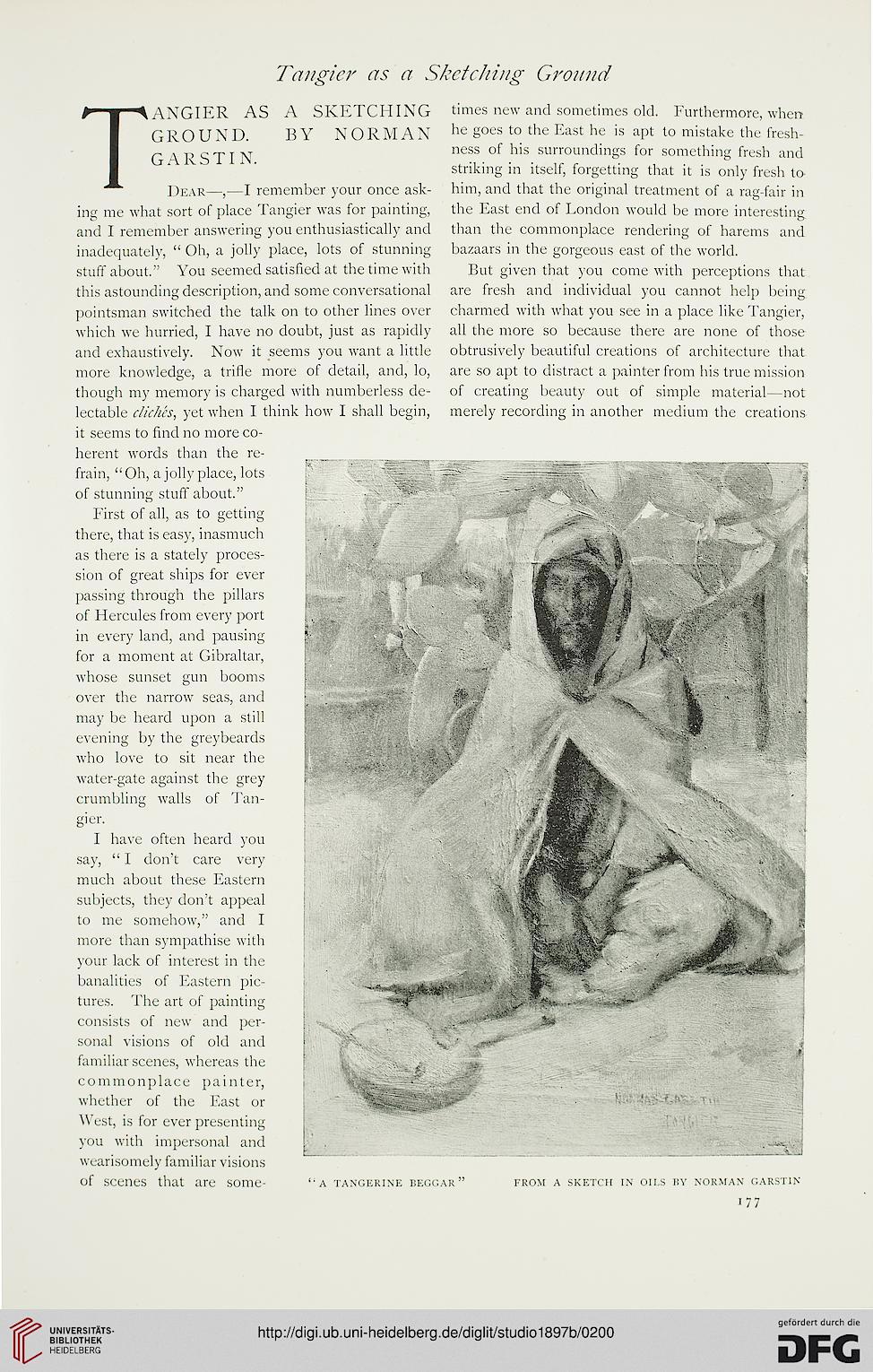 Information about OCR text
Tangier as a Sketching Ground

ANGIER AS A SKETCHING times new and sometimes old. Furthermore, when
GROUND. BY NORMAN he Soes t0 the East he is aP* to mistake the fresh-

striking in itself, forgetting that it is only fresh to
Dear—,—I remember your once ask- him, and that the original treatment of a rag-fair in
ing me what sort of place Tangier was for painting, the East end of London would be more interesting
and I remember answering you enthusiastically and than the commonplace rendering of harems and
inadequately, " Oh, a jolly place, lots of stunning bazaars in the gorgeous east of the world,
stuff about." You seemed satisfied at the time with But given that you come with perceptions that
this astounding description, and some conversational are fresh and individual you cannot help being
pointsman switched the talk on to other lines over charmed with what you see in a place like Tangier,
which we hurried, I have no doubt, just as rapidly all the more so because there are none of those
and exhaustively. Now it seems you want a little obtrusively beautiful creations of architecture that
more knowledge, a trifle more of detail, and, lo, are so apt to distract a painter from his true mission
though my memory is charged with numberless de- of creating beauty out of simple material—not
lectable cliches, yet when I think how I shall begin, merely recording in another medium the creations
it seems to find no more co-
herent words than the re-
frain, "Oh, a jolly place, lots
of stunning stuff about."

First of all, as to getting
there, that is easy, inasmuch
as there is a stately proces-
sion of great ships for ever
passing through the pillars
of Hercules from every port
in every land, and pausing
for a moment at Gibraltar,
whose sunset gun booms
over the narrow seas, and
may be heard upon a still
evening by the greybeards
who love to sit near the
water-gate against the grey
crumbling walls of Tan-
gier.

I have often heard you
say, " I don't care very
much about these Eastern
subjects, they don't appeal
to me somehow," and I
more than sympathise with
your lack of interest in the
banalities of Eastern pic-
tures. The art of painting
consists of new and per-
sonal visions of old and
familiar scenes, whereas the
commonplace painter,
whether of the East or
West, is for ever presenting
you with impersonal and
wearisomely familiar visions
of scenes that are some- "a tangerine beggar" from a sketch in oils by normax garstin