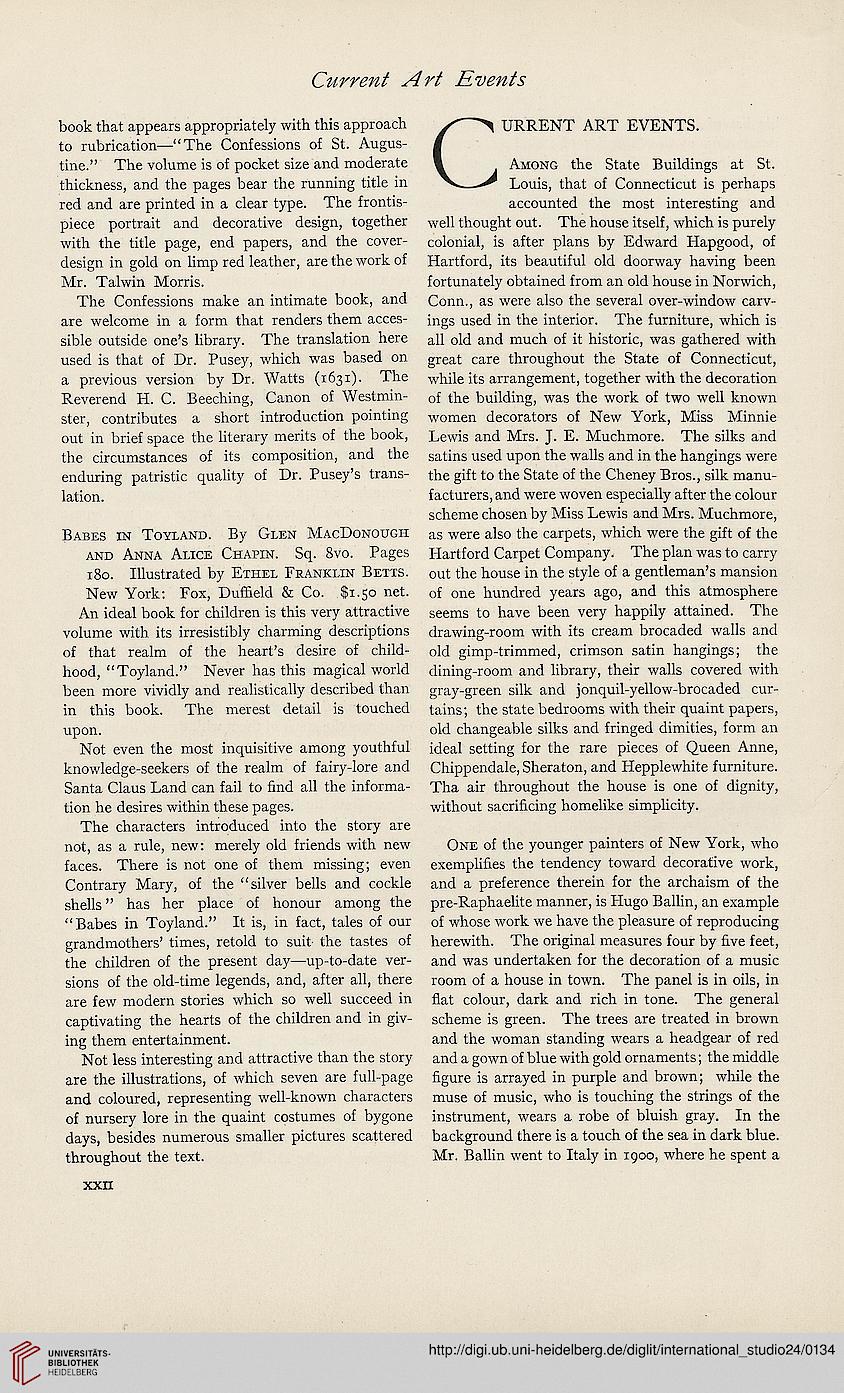 book that appears appropriately with this approach
to rubrication—“The Confessions of St. Augus-
tine.” The volume is of pocket size and moderate
thickness, and the pages bear the running title in
red and are printed in a clear type. The frontis-
piece portrait and decorative design, together
with the title page, end papers, and the cover-
design in gold on limp red leather, are the work of
Mr. Talwin Morris.
The Confessions make an intimate book, and
are welcome in a form that renders them acces-
sible outside one’s library. The translation here
used is that of Dr. Pusey, which was based on
a previous version by Dr. Watts (1631). The
Reverend H. C. Beeching, Canon of Westmin-
ster, contributes a short introduction pointing
out in brief space the literary merits of the book,
the circumstances of its composition, and the
enduring patristic quality of Dr. Pusey’s trans-
lation.
Babes in Toyland. By Glen MacDonough
and Anna Alice Chapin. Sq. 8vo. Pages
180. Illustrated by Ethel Franklin Betts.
New York: Fox, Duffield & Co. $1.50 net.
An ideal book for children is this very attractive
volume with its irresistibly charming descriptions
of that realm of the heart’s desire of child-
hood, “Toyland.” Never has this magical world
been more vividly and realistically described than
in this book. The merest detail is touched
upon.
Not even the most inquisitive among youthful
knowledge-seekers of the realm of fairy-lore and
Santa Claus Land can fail to find all the informa-
tion he desires within these pages.
The characters introduced into the story are
not, as a rule, new: merely old friends with new
faces. There is not one of them missing; even
Contrary Mary, of the “silver bells and cockle
shells ” has her place of honour among the
“Babes in Toyland.” It is, in fact, tales of our
grandmothers’ times, retold to suit the tastes of
the children of the present day—up-to-date ver-
sions of the old-time legends, and, after all, there
are few modern stories which so well succeed in
captivating the hearts of the children and in giv-
ing them entertainment.
Not less interesting and attractive than the story
are the illustrations, of which seven are full-page
and coloured, representing well-known characters
of nursery lore in the quaint costumes of bygone
days, besides numerous smaller pictures scattered
throughout the text.

CURRENT ART EVENTS.
Among the State Buildings at St.
Louis, that of Connecticut is perhaps
accounted the most interesting and
well thought out. The house itself, which is purely
colonial, is after plans by Edward Hapgood, of
Hartford, its beautiful old doorway having been
fortunately obtained from an old house in Norwich,
Conn., as were also the several over-window carv-
ings used in the interior. The furniture, which is
all old and much of it historic, was gathered with
great care throughout the State of Connecticut,
while its arrangement, together with the decoration
of the building, was the work of two well known
women decorators of New York, Miss Minnie
Lewis and Mrs. J. E. Muchmore. The silks and
satins used upon the walls and in the hangings were
the gift to the State of the Cheney Bros., silk manu-
facturers, and were woven especially after the colour
scheme chosen by Miss Lewis and Mrs. Muchmore,
as were also the carpets, which were the gift of the
Hartford Carpet Company. The plan was to carry
out the house in the style of a gentleman’s mansion
of one hundred years ago, and this atmosphere
seems to have been very happily attained. The
drawing-room with its cream brocaded walls and
old gimp-trimmed, crimson satin hangings; the
dining-room and library, their walls covered with
gray-green silk and jonquil-yellow-brocaded cur-
tains; the state bedrooms with their quaint papers,
old changeable silks and fringed dimities, form an
ideal setting for the rare pieces of Queen Anne,
Chippendale, Sheraton, and Hepplewhite furniture.
Tha air throughout the house is one of dignity,
without sacrificing homelike simplicity.

One of the younger painters of New York, who
exemplifies the tendency toward decorative work,
and a preference therein for the archaism of the
pre-Raphaelite manner, is Hugo Ballin, an example
of whose work we have the pleasure of reproducing
herewith. The original measures four by five feet,
and was undertaken for the decoration of a music
room of a house in town. The panel is in oils, in
flat colour, dark and rich in tone. The general
scheme is green. The trees are treated in brown
and the woman standing wears a headgear of red
and a gown of blue with gold ornaments; the middle
figure is arrayed in purple and brown; while the
muse of music, who is touching the strings of the
instrument, wears a robe of bluish gray. In the
background there is a touch of the sea in dark blue.
Mr. Ballin went to Italy in 1900, where he spent a