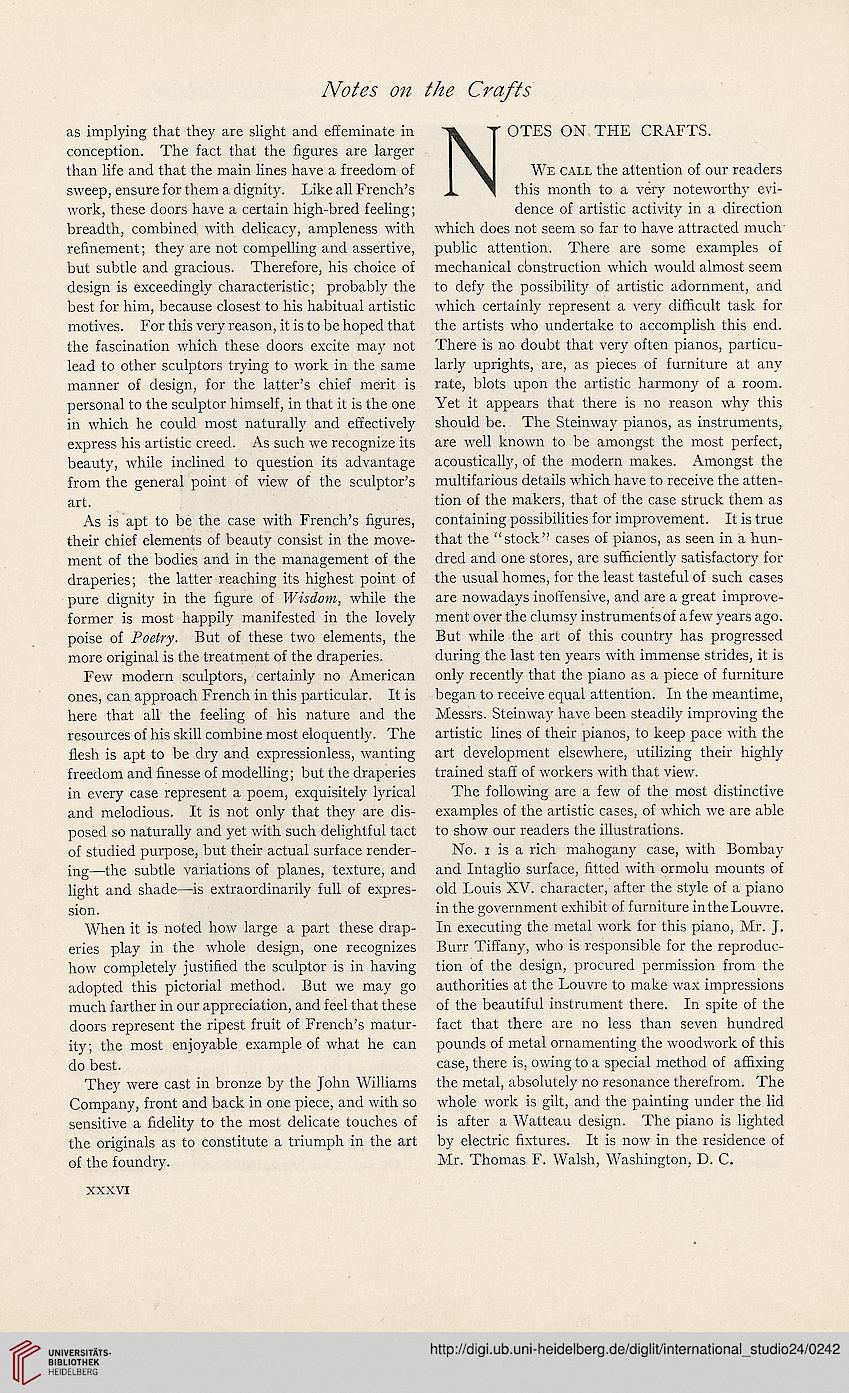 as implying that they are slight and effeminate in
conception. The fact that the figures are larger
than life and that the main lines have a freedom of
sweep, ensure for them a dignity. Like all French’s
work, these doors have a certain high-bred feeling;
breadth, combined with delicacy, ampleness with
refinement; they are not compelling and assertive,
but subtle and gracious. Therefore, his choice of
design is exceedingly characteristic; probably the
best for him, because closest to his habitual artistic
motives. For this very reason, it is to be hoped that
the fascination which these doors excite may not
lead to other sculptors trying to work in the same
manner of design, for the latter’s chief merit is
personal to the sculptor himself, in that it is the one
in which he could most naturally and effectively
express his artistic creed. As such we recognize its
beauty, while inclined to question its advantage
from the general point of view of the sculptor’s
art.
As is apt to be the case with French’s figures,
their chief elements of beauty consist in the move-
ment of the bodies and in the management of the
draperies; the latter reaching its highest point of
pure dignity in the figure of Wisdom, while the
former is most happily manifested in the lovely
poise of Poetry. But of these two elements, the
more original is the treatment of the draperies.
Few modern sculptors, certainly no American
ones, can approach French in this particular. It is
here that all the feeling of his nature and the
resources of his skill combine most eloquently. The
flesh is apt to be dry and expressionless, wanting
freedom and finesse of modelling; but the draperies
in every case represent a poem, exquisitely lyrical
and melodious. It is not only that they are dis-
posed so naturally and yet with such delightful tact
of studied purpose, but their actual surface render-
ing—the subtle variations of planes, texture, and
light and shade—is extraordinarily full of expres-
sion.
When it is noted how large a part these drap-
eries play in the whole design, one recognizes
how completely justified the sculptor is in having
adopted this pictorial method. But we may go
much farther in our appreciation, and feel that these
doors represent the ripest fruit of French’s matur-
ity; the most enjoyable example of what he can
do best.
They were cast in bronze by the John Williams
Company, front and back in one piece, and with so
sensitive a fidelity to the most delicate touches of
the originals as to constitute a triumph in the art
of the foundry.

Notes on the crafts.
We call the attention of our readers
this month to a very noteworthy evi-
dence of artistic activity in a direction
which does not seem so far to have attracted much
public attention. There are some examples of
mechanical cbnstruction which would almost seem
to defy the possibility of artistic adornment, and
which certainly represent a very difficult task for
the artists who undertake to accomplish this end.
There is no doubt that very often pianos, particu-
larly uprights, are, as pieces of furniture at any
rate, blots upon the artistic harmony of a room.
Yet it appears that there is no reason why this
should be. The Steinway pianos, as instruments,
are well known to be amongst the most perfect,
acoustically, of the modern makes. Amongst the
multifarious details which have to receive the atten-
tion of the makers, that of the case struck them as
containing possibilities for improvement. It is true
that the “stock” cases of pianos, as seen in a hun-
dred and one stores, are sufficiently satisfactory for
the usual homes, for the least tasteful of such cases
are nowadays inoffensive, and are a great improve-
ment over the clumsy instruments of a few years ago.
But while the art of this country has progressed
during the last ten years with immense strides, it is
only recently that the piano as a piece of furniture
began to receive equal attention. In the meantime,
Messrs. Steinway have been steadily improving the
artistic lines of their pianos, to keep pace with the
art development elsewhere, utilizing their highly
trained staff of workers with that view.
The following are a few of the most distinctive
examples of the artistic cases, of which we are able
to show our readers the illustrations.
No. i is a rich mahogany case, with Bombay
and Intaglio surface, fitted with ormolu mounts of
old Louis XV. character, after the style of a piano
in the government exhibit of furniture in the Louvre.
In executing the metal work for this piano, Mr. J.
Burr Tiffany, who is responsible for the reproduc-
tion of the design, procured permission from the
authorities at the Louvre to make wax impressions
of the beautiful instrument there. In spite of the
fact that there are no less than seven hundred
pounds of metal ornamenting the woodwork of this
case, there is, owing to a special method of affixing
the metal, absolutely no resonance therefrom. The
whole work is gilt, and the painting under the lid
is after a Watteau design. The piano is lighted
by electric fixtures. It is now in the residence of
Mr. Thomas F. Walsh, Washington, D. C.