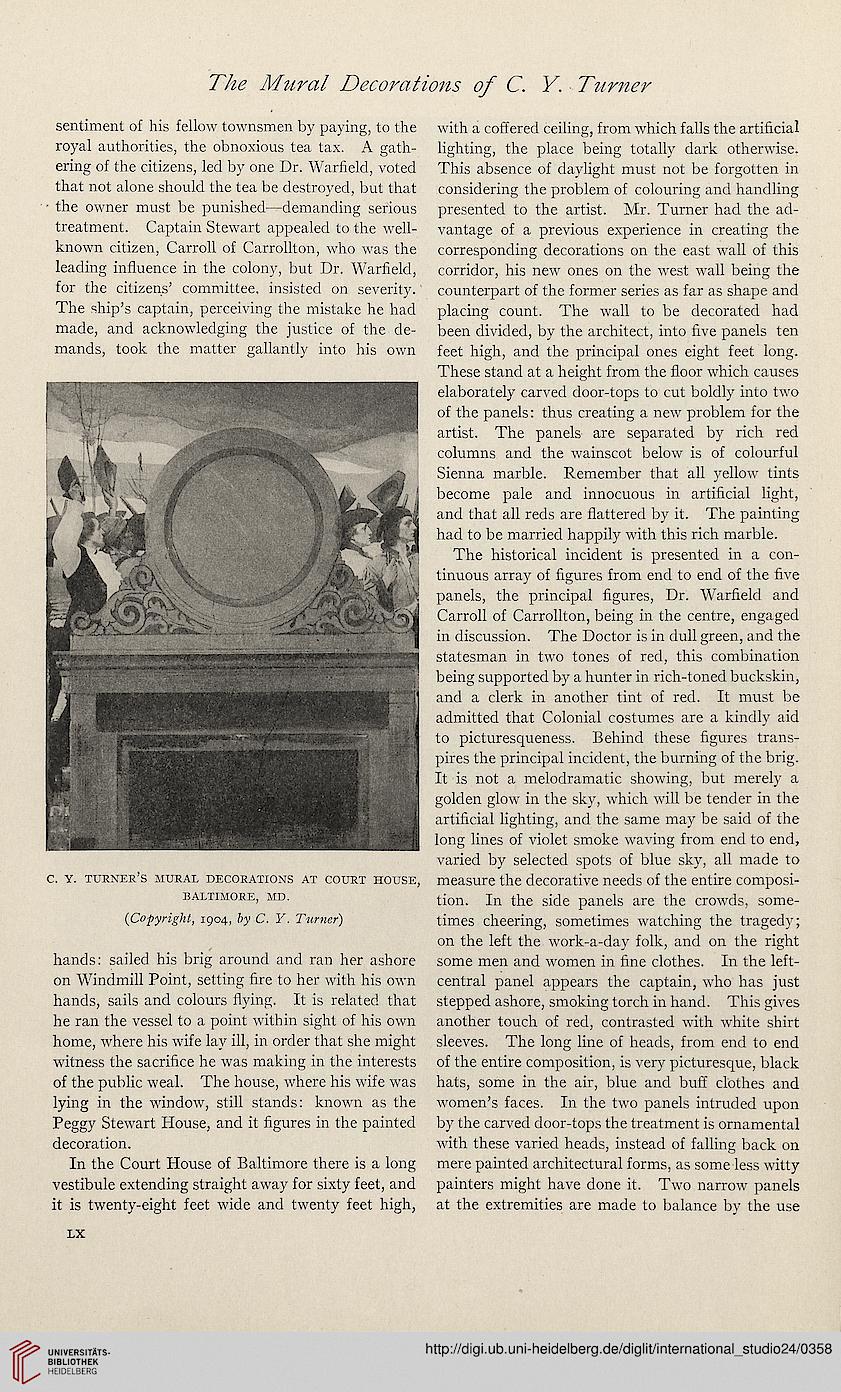 sentiment of his fellow townsmen by paying, to the
royal authorities, the obnoxious tea tax. A gath-
ering of the citizens, led by one Dr. Warfield, voted
that not alone should the tea be destroyed, but that
the owner must be punished—demanding serious
treatment. Captain Stewart appealed to the well-
known citizen, Carroll of Carrollton, who was the
leading influence in the colony, but Dr. Warfield,
for the citizens’ committee, insisted on severity.
The ship’s captain, perceiving the mistake he had
made, and acknowledging the justice of the de-
mands, took the matter gallantly into his own

hands: sailed his brig around and ran her ashore
on Windmill Point, setting fire to her with his own
hands, sails and colours flying. It is related that
he ran the vessel to a point within sight of his own
home, where his wife lay ill, in order that she might
witness the sacrifice he was making in the interests
of the public weal. The house, where his wife was
lying in the window, still stands: known as the
Peggy Stewart House, and it figures in the painted
decoration.
In the Court House of Baltimore there is a long
vestibule extending straight away for sixty feet, and
it is twenty-eight feet wide and twenty feet high,
LX

with a coffered ceiling, from which falls the artificial
lighting, the place being totally dark otherwise.
This absence of daylight must not be forgotten in
considering the problem of colouring and handling
presented to the artist. Mr. Turner had the ad-
vantage of a previous experience in creating the
corresponding decorations on the east wall of this
corridor, his new ones on the west wall being the
counterpart of the former series as far as shape and
placing count. The wall to be decorated had
been divided, by the architect, into five panels ten
feet high, and the principal ones eight feet long.
These stand at a height from the floor which causes
elaborately carved door-tops to cut boldly into two
of the panels: thus creating a new problem for the
artist. The panels are separated by rich red
columns and the wainscot below is of colourful
Sienna marble. Remember that all yellow tints
become pale and innocuous in artificial light,
and that all reds are flattered by it. The painting
had to be married happily with this rich marble.
The historical incident is presented in a con-
tinuous array of figures from end to end of the five
panels, the principal figures, Dr. Warfield and
Carroll of Carrollton, being in the centre, engaged
in discussion. The Doctor is in dull green, and the
statesman in two tones of red, this combination
being supported by a hunter in rich-toned buckskin,
and a clerk in another tint of red. It must be
admitted that Colonial costumes are a kindly aid
to picturesqueness. Behind these figures trans-
pires the principal incident, the burning of the brig.
It is not a melodramatic showing, but merely a
golden glow in the sky, which will be tender in the
artificial lighting, and the same may be said of the
long lines of violet smoke waving from end to end,
varied by selected spots of blue sky, all made to
measure the decorative needs of the entire composi-
tion. In the side panels are the crowds, some-
times cheering, sometimes watching the tragedy;
on the left the work-a-day folk, and on the right
some men and women in fine clothes. In the left-
central panel appears the captain, who has just
stepped ashore, smoking torch in hand. This gives
another touch of red, contrasted with white shirt
sleeves. The long line of heads, from end to end
of the entire composition, is very picturesque, black
hats, some in the air, blue and buff clothes and
women’s faces. In the two panels intruded upon
by the carved door-tops the treatment is ornamental
with these varied heads, instead of falling back on
mere painted architectural forms, as some less witty
painters might have done it. Two narrow panels
at the extremities are made to balance by the use