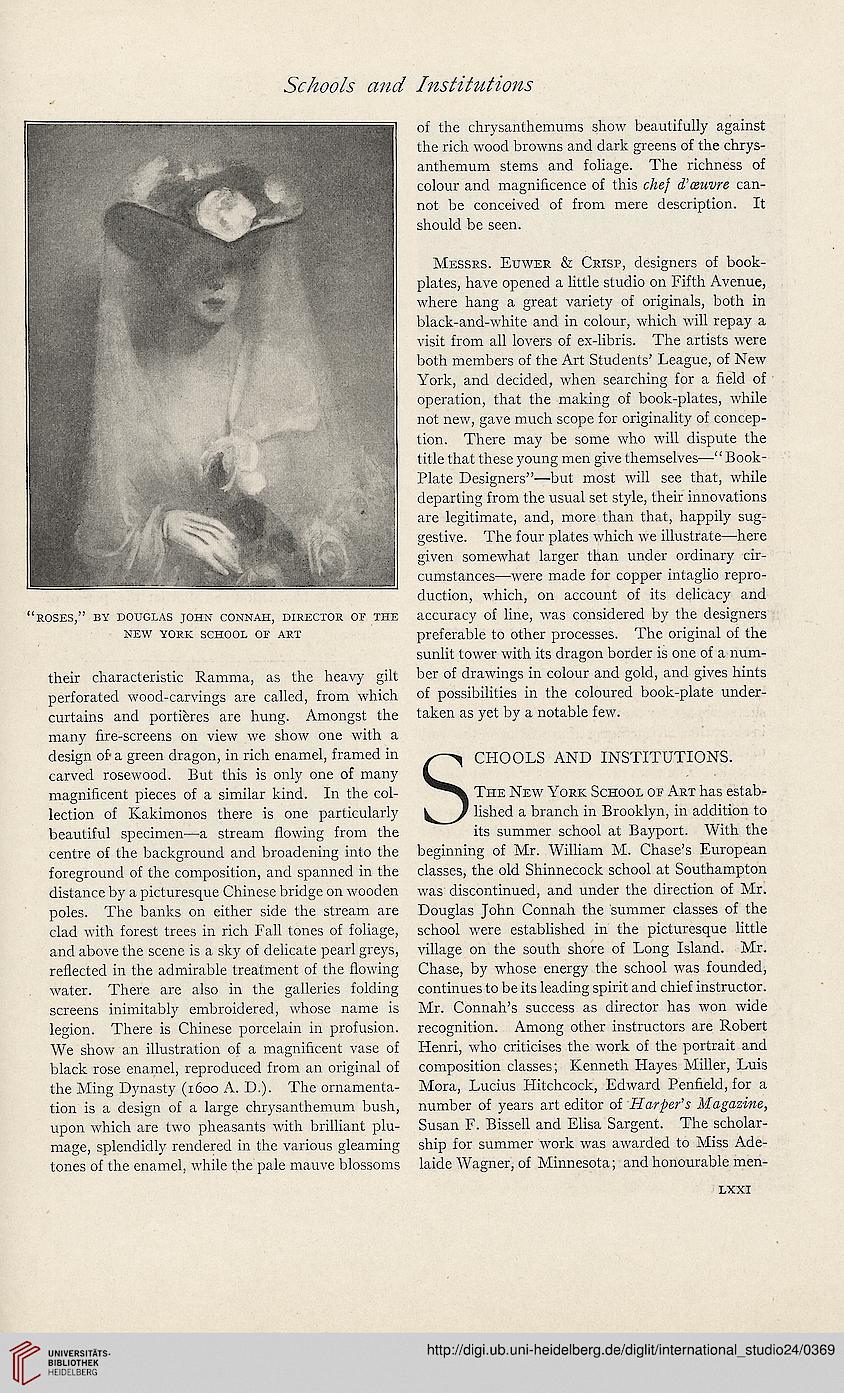 
“ROSES,” BY DOUGLAS JOHN CONNAH, DIRECTOR OF THE
NEW YORK SCHOOL OF ART
their characteristic Ramma, as the heavy gilt
perforated wood-carvings are called, from which
curtains and portieres are hung. Amongst the
many fire-screens on view we show one with a
design of-a green dragon, in rich enamel, framed in
carved rosewood. But this is only one of many
magnificent pieces of a similar kind. In the col-
lection of Kakimonos there is one particularly
beautiful specimen—a stream flowing from the
centre of the background and broadening into the
foreground of the composition, and spanned in the
distance by a picturesque Chinese bridge on wooden
poles. The banks on either side the stream are
clad with forest trees in rich Fall tones of foliage,
and above the scene is a sky of delicate pearl greys,
reflected in the admirable treatment of the flowing
water. There are also in the galleries folding
screens inimitably embroidered, whose name is
legion. There is Chinese porcelain in profusion.
We show an illustration of a magnificent vase of
black rose enamel, reproduced from an original of
the Ming Dynasty (1600 A. D.). The ornamenta-
tion is a design of a large chrysanthemum bush,
upon which are two pheasants with brilliant plu-
mage, splendidly rendered in the various gleaming
tones of the enamel, while the pale mauve blossoms

of the chrysanthemums show beautifully against
the rich wood browns and dark greens of the chrys-
anthemum stems and foliage. The richness of
colour and magnificence of this chef d'xuvre can-
not be conceived of from mere description. It
should be seen.
Messrs. Euwer & Crisp, designers of book-
plates, have opened a little studio on Fifth Avenue,
where hang a great variety of originals, both in
black-and-white and in colour, which will repay a
visit from all lovers of ex-libris. The artists were
both members of the Art Students’ League, of New
York, and decided, when searching for a field of
operation, that the making of book-plates, while
not new, gave much scope for originality of concep-
tion. There may be some who will dispute the
title that these young men give themselves—“ Book-
Plate Designers”—but most will see that, while
departing from the usual set style, their innovations
are legitimate, and, more than that, happily sug-
gestive. The four plates which we illustrate—here
given somewhat larger than under ordinary cir-
cumstances—were made for copper intaglio repro-
duction, which, on account of its delicacy and
accuracy of line, was considered by the designers
preferable to other processes. The original of the
sunlit tower with its dragon border is one of a num-
ber of drawings in colour and gold, and gives hints
of possibilities in the coloured book-plate under-
taken as yet by a notable few.

Schools and institutions.
The New York School of Art has estab-
lished a branch in Brooklyn, in addition to
its summer school at Bayport. With the
beginning of Mr. William M. Chase’s European
classes, the old Shinnecock school at Southampton
was discontinued, and under the direction of Mr.
Douglas John Connah the summer classes of the
school were established in the picturesque little
village on the south shore of Long Island. Mr.
Chase, by whose energy the school was founded,
continues to be its leading spirit and chief instructor.
Mr. Connah’s success as director has won wide
recognition. Among other instructors are Robert
Henri, who criticises the work of the portrait and
composition classes; Kenneth Hayes Miller, Luis
Mora, Lucius Hitchcock, Edward Penfield, for a
number of years art editor of Harper's Magazine,
Susan F. Bissell and Elisa Sargent. The scholar-
ship for summer work was awarded to Miss Ade-
laide Wagner, of Minnesota; and honourable men-