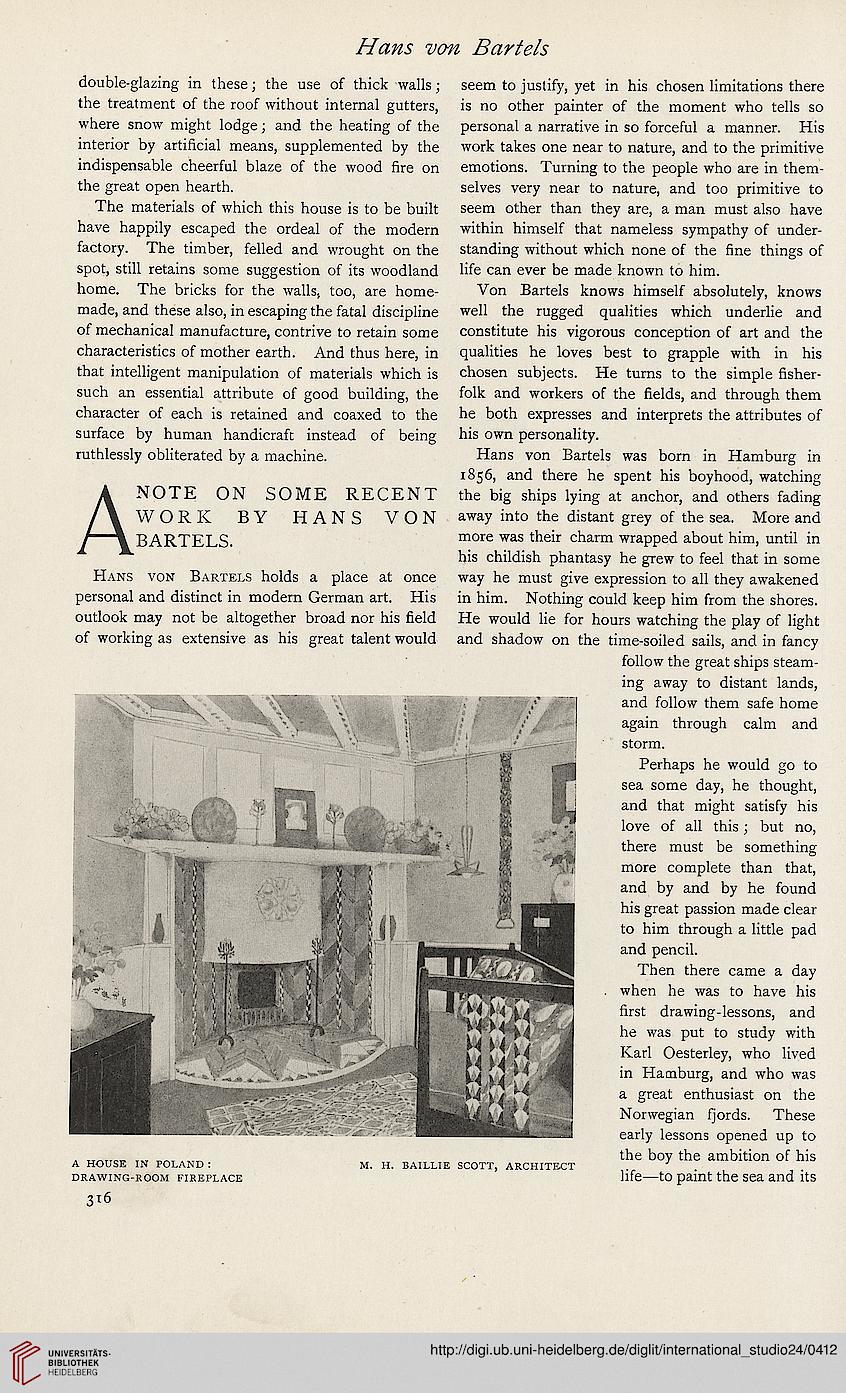 double-glazing in these; the use of thick walls;
the treatment of the roof without internal gutters,
where snow might lodge; and the heating of the
interior by artificial means, supplemented by the
indispensable cheerful blaze of the wood fire on
the great open hearth.
The materials of which this house is to be built
have happily escaped the ordeal of the modern
factory. The timber, felled and wrought on the
spot, still retains some suggestion of its woodland
home. The bricks for the walls, too, are home-
made, and these also, in escaping the fatal discipline
of mechanical manufacture, contrive to retain some
characteristics of mother earth. And thus here, in
that intelligent manipulation of materials which is
such an essential attribute of good building, the
character of each is retained and coaxed to the
surface by human handicraft instead of being
ruthlessly obliterated by a machine.
NOTE ON SOME RECENT
WORK BY HANS VON
BARTELS.
Hans von Bartels holds a place at once
personal and distinct in modern German art. His
outlook may not be altogether broad nor his field
of working as extensive as his great talent would

seem to justify, yet in his chosen limitations there
is no other painter of the moment who tells so
personal a narrative in so forceful a manner. His
work takes one near to nature, and to the primitive
emotions. Turning to the people who are in them-
selves very near to nature, and too primitive to
seem other than they are, a man must also have
within himself that nameless sympathy of under-
standing without which none of the fine things of
life can ever be made known to him.
Von Bartels knows himself absolutely, knows
well the rugged qualities which underlie and
constitute his vigorous conception of art and the
qualities he loves best to grapple with in his
chosen subjects. He turns to the simple fisher-
folk and workers of the fields, and through them
he both expresses and interprets the attributes of
his own personality.
Hans von Bartels was born in Hamburg in
1856, and there he spent his boyhood, watching
the big ships lying at anchor, and others fading
away into the distant grey of the sea. More and
more was their charm wrapped about him, until in
his childish phantasy he grew to feel that in some
way he must give expression to all they awakened
in him. Nothing could keep him from the shores.
He would lie for hours watching the play of light
and shadow on the time-soiled sails, and in fancy
follow the great ships steam-
ing away to distant lands,
and follow them safe home
again through calm and
storm.
Perhaps he would go to
sea some day, he thought,
and that might satisfy his
love of all this; but no,
there must be something
more complete than that,
and by and by he found
his great passion made clear
to him through a little pad
and pencil.
Then there came a day
when he was to have his
first drawing-lessons, and
he was put to study with
Karl Oesterley, who lived
in Hamburg, and who was
a great enthusiast on the
Norwegian fjords. These
early lessons opened up to
the boy the ambition of his
life—to paint the sea and its