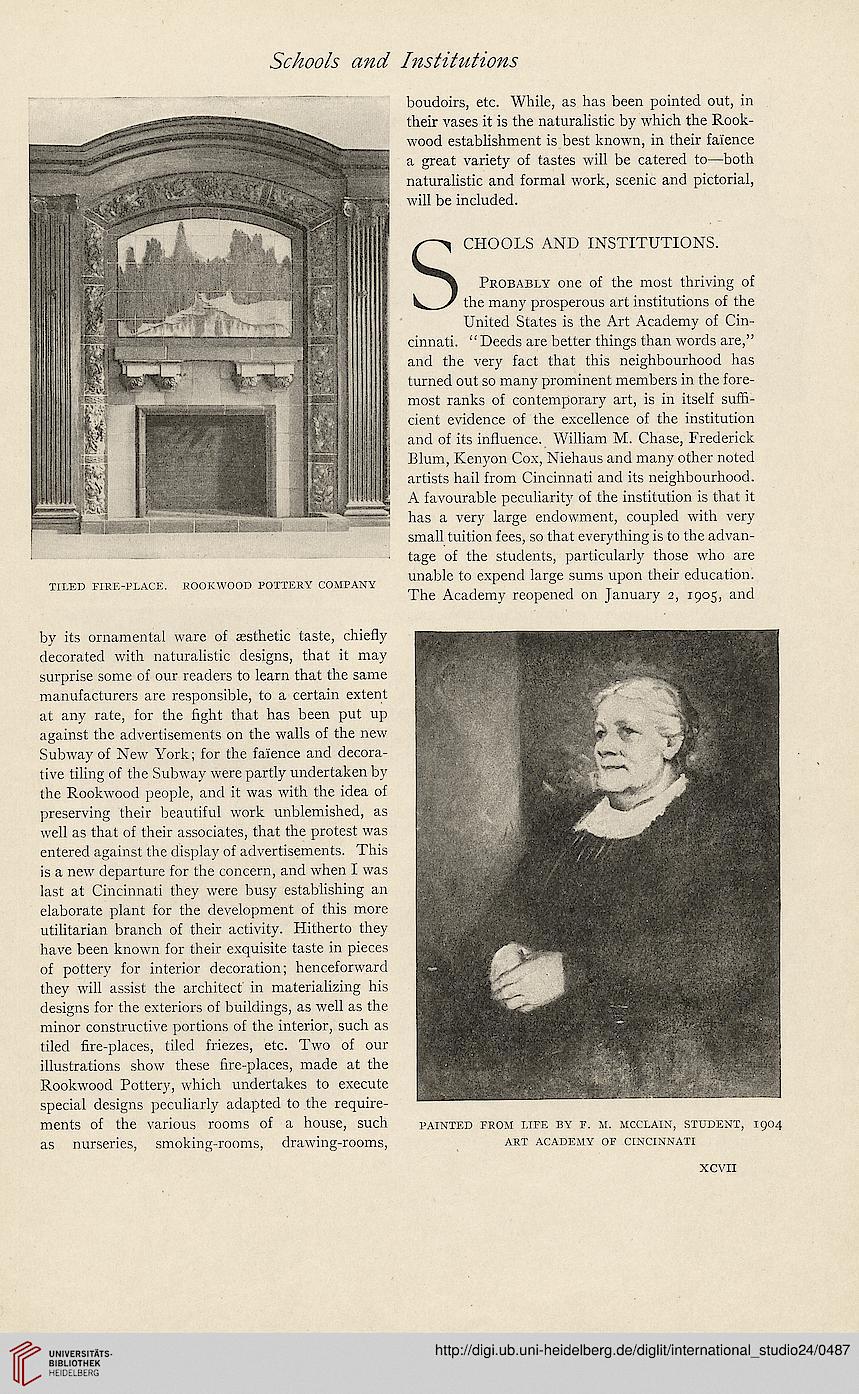 boudoirs, etc. While, as has been pointed out, in
their vases it is the naturalistic by which the Rook-
wood establishment is best known, in their faience
a great variety of tastes will be catered to—both
naturalistic and formal work, scenic and pictorial,
will be included.

Schools and institutions.
Probably one of the most thriving of
the many prosperous art institutions of the
United States is the Art Academy of Cin-
cinnati. “Deeds are better things than words are,”
and the very fact that this neighbourhood has
turned out so many prominent members in the fore-
most ranks of contemporary art, is in itself suffi-
cient evidence of the excellence of the institution
and of its influence. William M. Chase, Frederick
Blum, Kenyon Cox, Niehaus and many other noted
artists hail from Cincinnati and its neighbourhood.
A favourable peculiarity of the institution is that it
has a very large endowment, coupled with very
small tuition fees, so that everything is to the advan-
tage of the students, particularly those who are
unable to expend large sums upon their education.
The Academy reopened on January 2, 1905, and

by its ornamental ware of aesthetic taste, chiefly
decorated with naturalistic designs, that it may
surprise some of our readers to learn that the same
manufacturers are responsible, to a certain extent
at any rate, for the fight that has been put up
against the advertisements on the walls of the new
Subway of New York; for the faience and decora-
tive tiling of the Subway were partly undertaken by
the Rookwood people, and it was with the idea of
preserving their beautiful work unblemished, as
well as that of their associates, that the protest was
entered against the display of advertisements. This
is a new departure for the concern, and when I was
last at Cincinnati they were busy establishing an
elaborate plant for the development of this more
utilitarian branch of their activity. Hitherto they
have been known for their exquisite taste in pieces
of pottery for interior decoration; henceforward
they will assist the architect in materializing his
designs for the exteriors of buildings, as well as the
minor constructive portions of the interior, such as
tiled fire-places, tiled friezes, etc. Two of our
illustrations show these fire-places, made at the
Rookwood Pottery, which undertakes to execute
special designs peculiarly adapted to the require-
ments of the various rooms of a house, such
as nurseries, smoking-rooms, drawing-rooms,